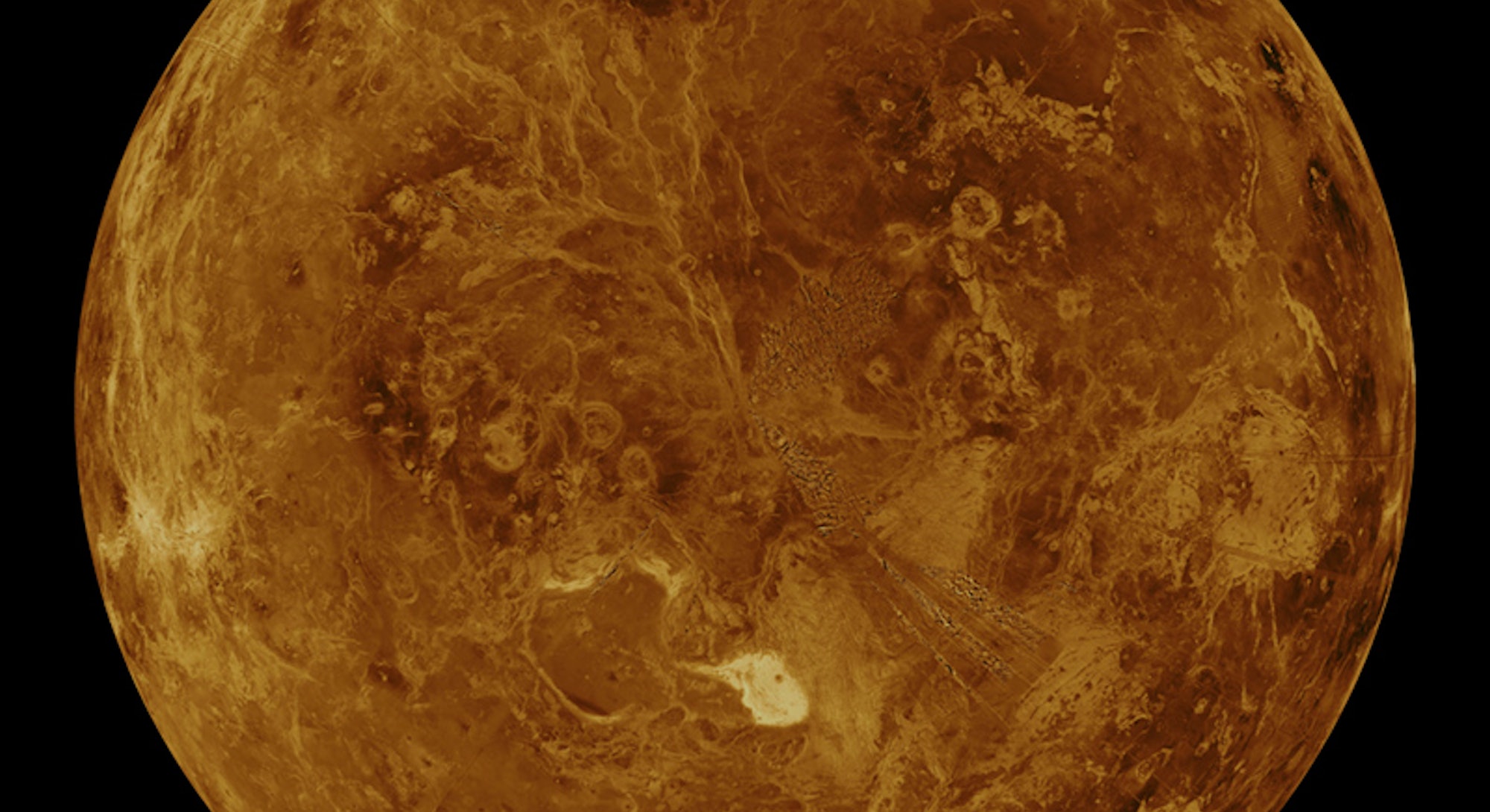 There is no place like Earth, but there may have been billions of years ago. Fifty years ago on March 27, 1972, Venera-8, a Soviet atmospheric space probe and lander scoped out the surface of our planetary neighbor, Venus. It was the second spaceship to successfully land on the planet.

Surprisingly, despite our inability to view the planet’s surface from space, Venera-8 made some illuminating discoveries about the visibility on Venus’ surface and provided important geochemical data that underscores the planet’s title as Earth’s sister.

Many people think of Mars as Earth’s sibling at a lofty distance of 34 million miles from Earth. But at the nearest point in its orbit to Earth, Venus is far closer to our planet, at 25 million miles. Earth and Venus are also about the same size, and have similar masses, whereas the Red Planet is about half the size of Earth.

It seems that early in their histories, Earth and Venus may have even been twin sisters (minus a Venusian moon). A 2016 paper by NASA scientist Michael Way and his team even proposes that Venus may have had water until 700 million years ago. If that is the case, might the current state of Venus be where Earth is headed?

That is not to say Earth and Venus are not without their differences, knowledge that in large part was acquired as a product of the Soviet Union’s study of Venus.

Trends in space exploration have veered away from the hot and thick atmosphere of Venus in favor of the colder and thinner atmosphere of Mars. There hasn’t been a lander sent to Venus’ surface since 1985 when the Soviet Union sent Vega 2. We seem to have forgotten that “Venus is Earth’s sister across the board; not twin sister, but they’re sisters,” Gregory Shellnutt, distinguished professor of geochemistry at National Taiwan Normal University, says.

Between 1961 and 1983, the Soviet Union made strides in the space race with its exploration of Venus, launching 28 spacecraft as part of its Venera program. Venera-8 was not only the second manmade object to land on Venus, but it was the first fully successful landing another planet. Its predecessor, Venera-7, which launched two years prior, was the first partially successful landing on another planet. But there was a parachute failure that caused the lander to go into free fall ultimately causing Venera-7 to roll over after it first touched down, severely damaging the lander and preventing it from sharing continuous, high-quality data.

In the 18 years that the Soviet Union ran its Venera program, thirteen spaceships successfully entered Venus’ atmosphere — eight landed on the planet.

Venera-8 was launched on March 27, 1972, with the intention to take measurements of the atmosphere and surface of Venus. It took 118 days to reach the planet. The part of Venera-8 that was engineered to make the descent through the atmosphere to the surface was equipped with a refrigeration system to keep the equipment operating as long as possible. That’s because surface temperatures on Venus can be so hot during the daytime that they surpass the melting point of lead (620 degrees Fahrenheit).

Venera-8 carried with it a gamma-ray spectrometer, a device to analyze gas, an altimeter, a photometer to measure light, sensors to measure pressure and temperature, and a radio transmitter. Venera-8 was intended to validate the measurements of Venus’ atmosphere taken by Venera-7, which despite its landing complications, managed to record that the atmosphere was composed of 97 percent carbon dioxide. It also recorded a surface temperature of 887 degrees Fahrenheit, and a pressure of 9.0 MPa (compared to ~0.1 MPa on Earth). These measurements immediately indicated that there is no water on the surface of Venus, nor is it a habitable environment for humans.

Venus also doesn’t have a magnetic field, or if it does it is very weak. This is because, Shellnutt explains, the surface of Venus is approaching the Curie temperature. The Curie temperature is a threshold whereby a material becomes so hot it loses its magnetic properties.

Venera-8 did confirm the measurements made by Venera-7, but because of its comparatively successful landing, Venera-8’s photometer revealed something unexpected.

Despite the fact it was impossible to see through the hazy Venusian atmosphere to the surface of Venus, the visibility on the planet’s surface was actually similar to that of Earth on a cloudy day and it was possible to see about one kilometer in each direction. Clouds were detected at a high altitude in the sky. After Venera-8 landed, engineers working on the Venera project realized it would be possible to take a photograph on the surface. So in 1975, Venera-9 not only successfully landed, but it became the first lander to take photos of the surface of another planet besides Earth.

A race for survival — and data

Venera-8 survived for less than an hour on the burning surface of Venus.

During the 50 minutes and 11 seconds that Venera-8 transmitted data after landing, it also measured the concentrations of three radioactive elements in Venus’ surface material: thorium, potassium, and uranium. On Earth, these are trace elements, meaning they are found in low quantities and in basalts, like what we would see in Hawaii or at mid-ocean ridges.

Shellnutt, who has been fascinated by Venus since he was 10 years old, has followed the research on Venus as his career has progressed. He himself remembers using crystallization modeling software for his own research to study rocks here on Earth when he stumbled upon the gamma-ray spectrometer trace element data from Venera-8 — and was reminded of all of the Venus probes and their geochemical data.

Venera-8 was unique in that it presented quite an anomaly compared to the data from many of the other landers. Shellnutt explains that even with 30 percent error margins, the trace element values Venera-8 found were too high to qualify as the kinds of basalts you would find near a mid-ocean ridge or Hawaii. Unlike Venera-8, the other landers on Venus recorded geochemical values that were more similar to those you would find in or along a mid-ocean ridge.

In a 2019 paper titled, “The curious case of the rock at Venera-8,” Shellnutt describes how by using his Earth-based crystallization modeling techniques on the trace element values at the Venera-8 landing site, he determined that those values may be similar to a certain type of continental crust on Earth called Archean greenstone belts. Archean refers to a period on Earth 2.5-4 billion years ago. Greenstone belts are a type of continental crust, that many scientists interpret to have chemically evolved over billions of years from mafic basalts.

The Earth looked very different during the Archean. The planet had just formed and it was piping hot. Because of its heat, Earth’s tectonic regime during this time remains a mystery, as does the current and past tectonic regimes of Venus. As of now, there is no evidence of plate tectonics on Venus as we understand them on Earth.

Venus’ topography is quite different than Earth’s as well. Shellnutt describes the impressive volcanic edifices and landmasses the size of Africa — but with a critical difference.

“If we look at the Archaean Earth, there’s tremendous debate of whether modern plate tectonics operated during the Archaean. So how do you get these landforms [on Venus]? How does all this deformation occur? There’s evidence of compression mountains on Venus. There’s evidence of rifts, so it’s obviously tectonically active, but it’s just not broken into plates,” he says.

“Venus is most likely operating under an Archaean tectonic system, not a modern Earth plate tectonics system; something similar to ancient Earth during the Archaean where there may not have been defined plates, the temperature, the interior of the Earth was much higher,” he adds.