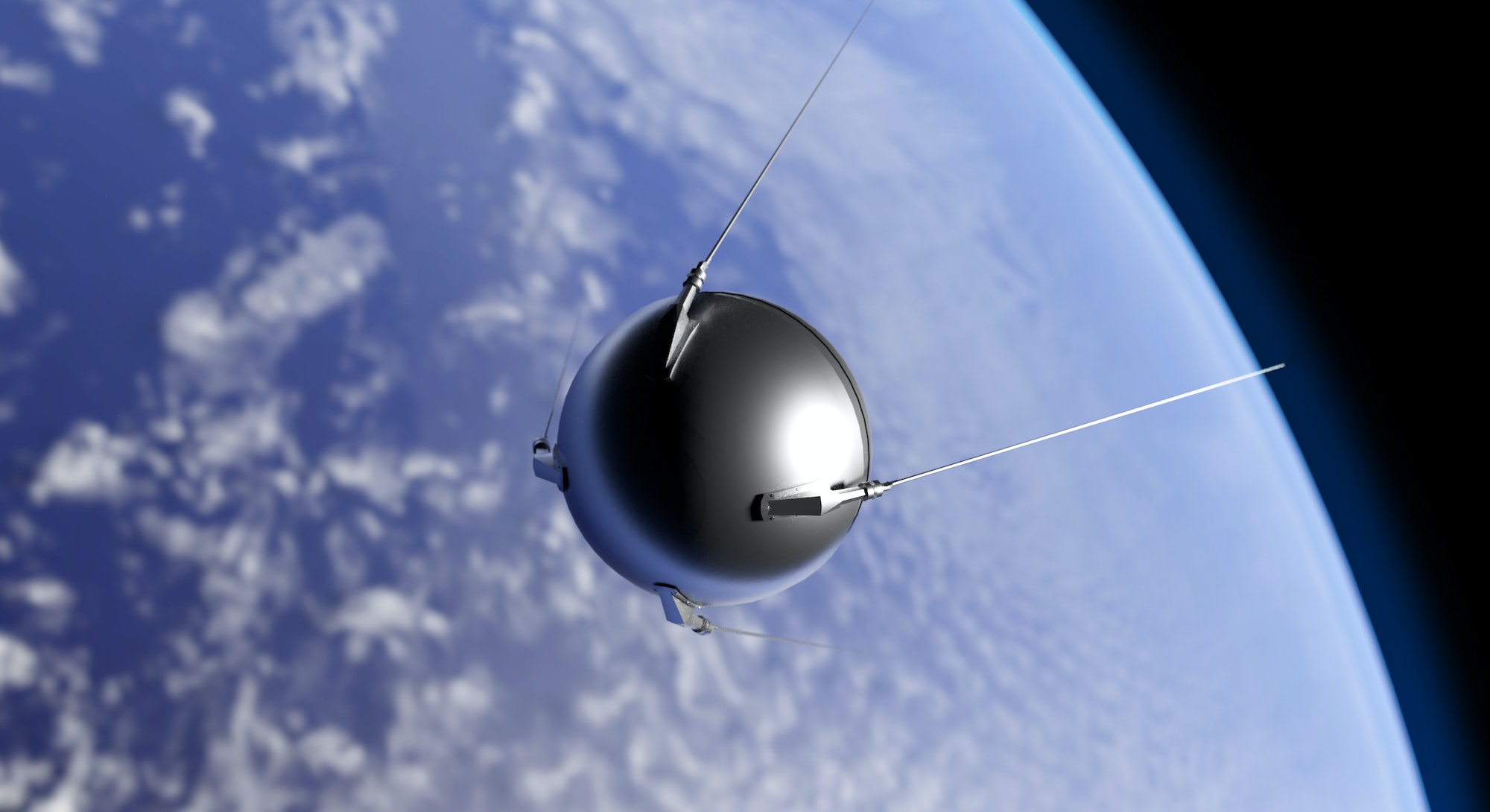 Earth’s first-ever artificial satellite Sputnik launched on October 4, 1957. In that moment, which occurred sixty-five years ago, the Cold War between the United States and the Soviet Union transformed into a race to dominate not only Earth but also space.

But there was more to the launch than met the eye — behind the development of satellites to orbit Earth was a more nefarious purpose.

“The other aspect of it was, of course, the race to develop the first intercontinental ballistic missile. The U.S. was working on the Atlas missile, and the Russians were working on the RS-7,” says Jonathan McDowell, an astronomer and astrophysicist at the Harvard–Smithsonian Center for Astrophysics.

The race for space

Sputnik launched during the International Geophysical Year, an 18-month-long international scientific initiative that took place between 1957 and 1958. The Year ultimately signified the end of a period of noncooperation between the East and the West during the early years of the Cold War that had lasted through the death of Soviet leader Stalin in 1953. It involved scientists from 67 different countries. But it was not all rosy teamwork — the Cold War may have defrosted slightly with Stalin’s death, yet it was still chilly at best.

In 1955, then-U.S. President Dwight D. Eisenhower proposed an “Open Skies” policy that would allow any nation to conduct aerial reconnaissance on any other. After the Soviet Union rejected the proposal in 1955 and following the approval of the National Security Council, the U.S. announced its intention to develop a science satellite as part of the International Geophysical Year. The Soviet Union made a similar declaration shortly thereafter.

Some experts argue that this marked the beginning of the space race. John Logsdon, a Professor Emeritus at George Washington University’s Elliott School of International Affairs and former NASA advisor, explains to Inverse that behind the scenes, the U.S. and the Soviet Union were in a race to develop the first intercontinental ballistic missile. As McDowell explains, the U.S. was working toward developing the Atlas missile while the Soviet Union was developing the RS-7 missile.

Turning up the heat

After the development and usage of Nazi Germany’s V-2 rocket, the world’s first long-range guided ballistic missile, the U.S. and the U.S.S.R. took careful note of how to iterate on this rocket to broach intercontinental distances.

Between 1954 and 1957, space innovator Sergei Korolëv ran the U.S.S.R.’s ballistic program. Korolëv is better known today for being the person behind the first human spaceflight and Sputnik, but at the time, he was responsible for developing another world-first: An intercontinental ballistic missile called the R-7.

Both nations had developed an H-bomb by that time. An intercontinental ballistic missile would potentially be able to carry one of these devastating weapons long distances.

The Soviet Union tested its missile for the first time on May 15, 1957 — it was unsuccessful. It crashed long prior to its intended landing. But on August 21, 1957, the USSR managed to launch the world’s first intercontinental ballistic missile, successfully sending the missile a distance of 3700 miles from Kazakhstan to Kamachatka. But at the same time, the same team was working on a satellite for scientific purposes: Sputnik. The two projects worked hand-in-hand, McDowell says.

“They had a plan to have a version of the RS-7 with somewhat operated engines that would put a scientific satellite in orbit,” McDowell says.

At first, the Soviet Union tried to make a satellite that was both large and complicated. But Korolëv, the project’s mastermind, realized that might not work.

“It got to be a very big and heavy satellite for the time. It occurred to Korolëv that if they pursued this satellite, they would not be able to be first in space,” Logsdon explains.

“So he proposed to Khrushchev, who was General Secretary of the Communist Party, that a second satellite, which he called a ‘simple satellite,’ be developed with the explicit purpose of being first.”

Korolëv was permitted to go ahead — pending the successful tests of the intercontinental ballistic missile, the RS-7. Korolëv was in charge of the rocket, and meanwhile, Mikhail S. Khomyakov was the chief designer of the satellite. After the successful test of the RS-7 in August 1957, Korolëv got permission to proceed with an attempt to launch his ‘simple satellite.’

The plan, McDowell says, was to “take the missile we have now, and even without modification, it can put a small satellite in orbit. So, they developed a plan to make the simplest satellite and put it on top of [the missile].”

“They succeeded on the first try – October 4, 1957. The Soviet Union had shocked the world with – wow — we have a really big rocket,” McDowell says.

Sputnik proved that the Soviet Union had a rocket large enough to put a satellite in orbit. Sputnik weighed about 80 kilograms — compare to Explorer One, the U.S.’s first satellite, which launched in February 1958 and was 4 kilograms. Sputnik demonstrated the U.S.S.R. had a much greater capacity to launch heavy payloads into orbit than America.

“The launch of Sputnik demonstrated to the world that the Soviet Union had a rocket capable of launching a nuclear warhead over long distances,” says Logsdon. “There was a very real military impact of the Sputnik launch, demonstrating intercontinental missile capability that, in particular, the United States was accessible for Soviet nuclear weapons.”

But Sputnik wasn’t the satellite the U.S.S.R. had originally intended to build for the International Geophysical Year. Ultimately, Sputnik made very little contribution to the Soviet Union’s scientific program. Rather, the originally planned satellite was Object D, or Sputnik 3, which launched on May 15, 1958. This satellite could measure the ionosphere, a layer of Earth’s atmosphere, and offered the first data of its kind for scientists on Earth.

Sputnik was a world first, but for his part, McDowell doesn’t consider its launch the start of a new era of space travel.

“I think that space travel for me began in 1942 with the launch of Wernher von Braun’s V-2 rocket above the atmosphere,” he says.

“That's suborbital space flight. By 1957, a bunch of countries had their own modified versions of that. There’s some questions about who actually first got to the atmosphere, but the one that probably did is October 3, 1942.”

The V-2 rocket was the brainchild of Wehner von Braun, a Nazi scientist who later became an important figure in the United States’ Apollo program and the development of the rocket that would ultimately send Explorer 1, the first U.S. satellite, into orbit.

“You know, one of the things I get into trouble with some of my colleagues is the use of the word ‘race.’ You might say that the V-2 was the start of the space era because it was the first across the imaginary boundary between atmosphere and outer space. But a race has a finish line. That's what makes it a race,” Logsdon says.

“So, to me, the race was when Russia decided it was going to be first to do this. There was a finish line, which was to be the first to orbit an object.”

“[Then U.S. President] Kennedy and the U.S. redefined the race because we had already lost two races. First satellite, then the first human in space [Yuri Gagarin in April 1961],” reflects Logsdon.

If the finish line keeps moving, then who can say who wins the race?