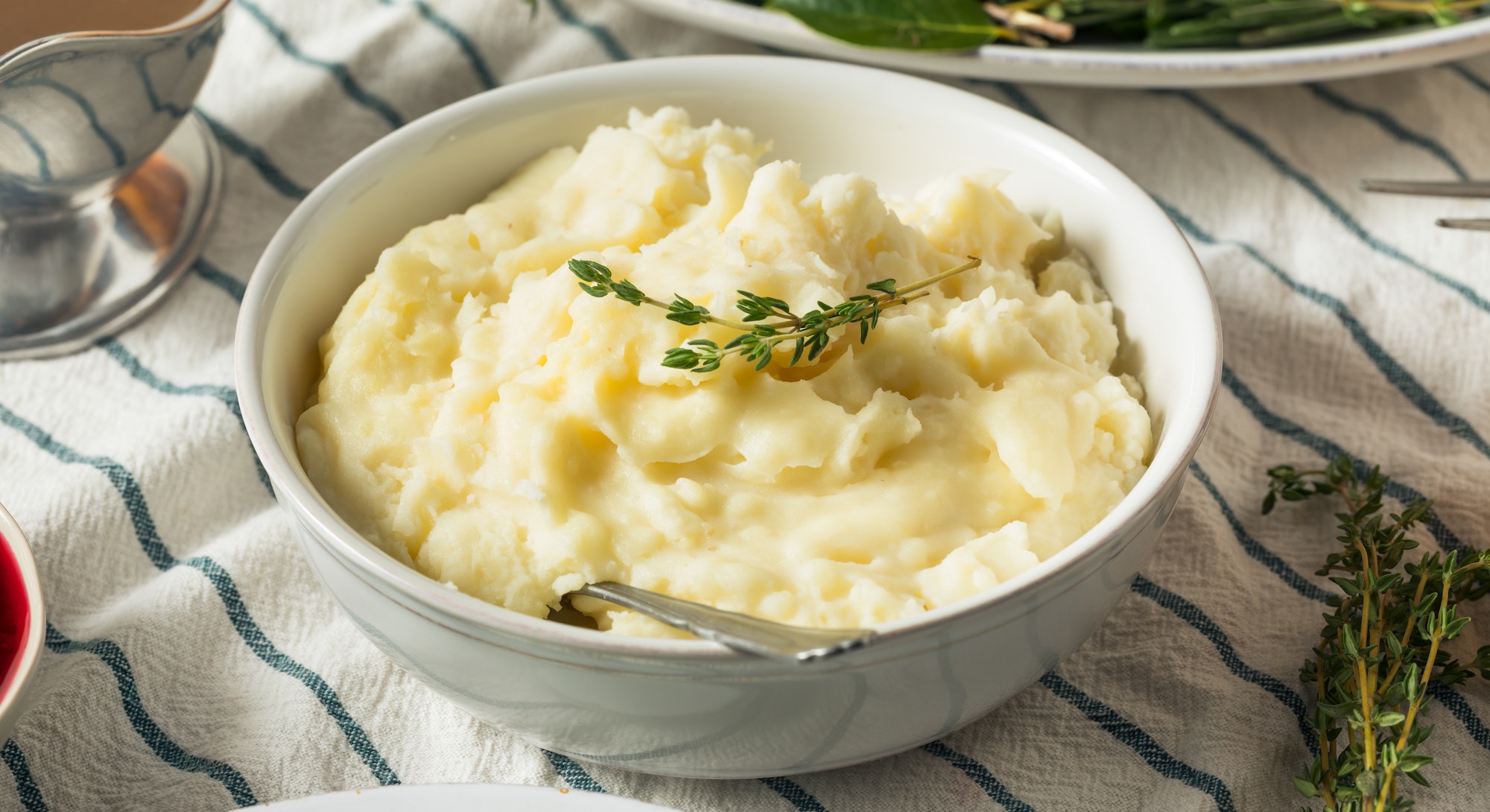 Mashed potatoes are essentially an edible expression of minimalism. In a home, a room with a couch, a chair, and a table can look empty and bland or clean and modern. At the fundamental level, mashed potatoes constitute four ingredients: potatoes, cream, butter, and salt. But in cooking, as in life, simplicity can be deceiving. Use a substandard ingredient in a classic mashed potato dish, and you risk a stodgy, tasteless mess. When you have so few elements in a dish, each one needs to be as close to perfect as possible for the whole to work.

Chef Herve Malivert, the director of culinary affairs at the Institute of Culinary Education, has peeled more potatoes than he can count. When it comes to mashing, he tells Inverse, “it’s easy to make a mashed potato, but it’s also easy to make them gluey or dry and starchy.”

For creamy and smooth mashed potatoes, not all spuds will yield the desired results. In the typical American supermarket, you’re likely to encounter a handful of potato varieties, including large brown russets, petite fingerlings, shiny Yukon golds, and round red potatoes. All these tubers are delicious, but some are better suited for roasting or boiling than mashing. The reason is that different varieties have distinct cellular characteristics and starch levels. Russet and Idaho potatoes are high-starch, Yukon golds are medium-starch, while red and fingerling potatoes are low-starch.

If you’ve ever conducted the grade school experiment of mixing cornstarch with water, you have a pretty good idea of how starch works. Cornstarch and water combine to form a non-Newtonian fluid — a fluid that does not flow in accordance with Newton’s laws of viscosity. Newtonian fluids, like water, maintain a constant viscosity independent of outside forces. A mixture of cornstarch and water, on the other hand, changes viscosity when pressure is applied. The starch adheres to the water to form a sticky substance that can be formed into a ball by hand but flows like water when not under pressure.

When used in food, starch acts as a binder. It glues food together and helps to retain moisture. Frequent bakers know this well — for example, tapioca starch is often added to fruit pies to help form a gooey filling that won’t run out of the pie when sliced. Potatoes contain natural starch locked up inside their cell walls. When they’re cooked and mashed, the starch is released. In turn, controlling the amount of starch in your mashed potatoes is essential for achieving your desired texture.

For fluffy mashed potatoes with a light texture, the goal is to release as little starch as possible. The correct amount will keep the mash together, but too much will create a gummy blob.

Choosing a high-starch potato doesn’t mean you’ll end up with gluey mashed potatoes. The opposite is true. Chef Malivert says that, in general, “a starchy potato is better beacause a starchy potato will absorb more fat.”

Russet potatoes are a classic choice for fluffy mashed potatoes and the variety preferred by chef Malivert. Though these potatoes are high in starch, they are soft and easy to break apart. They require less mashing than low-starch fingerling potatoes.

To obtain the correct balance, chef Maliert stresses that how you process the potatoes is just as important as the potato that you select. According to Malivert, “almost any potato can work for mashed potatoes, but problems arise when they are overworked.”

When a potato is mashed or broken down, the cell walls rupture, and sticky starch is released. The more that a potato is processed, the more starch is released. Passing a high-starch russet potato through a ricer will release less starch and result in fluffier mashed potatoes than running low-starch potatoes through a food processor. Chef Malivert recommends saving red potatoes and new potatoes for oven-baked dishes.

The cooking method can also have a big impact on the texture and flavor of mashed potatoes. Most recipes call for boiling potatoes to cook them before mashing. Russet potatoes are large, and thoroughly cooking them can take up to 30 minutes. Cutting potatoes into small cubes might seem like a good way to accelerate their cooking time, but this can lead to flavorless mashed potatoes. When a potato is cut, its cell walls are exposed. The center of the potato will be in direct contact with boiling water while it is cooking. As it bumps up against the potatoes, water will draw out the starch and other enzymes.

In addition to starch, potatoes contain natural pectin and calcium ions. Pectin is another powerful food binder that can help hold mashed potatoes together while keeping their consistency light. If boiled in pieces, the calcium ions react with the pectin to form strong links that refuse to soften up. Potatoes cut into very small pieces will retain some firmness even when thoroughly cooked, as J. Kenji López-Alt proved in this Serious Eats experiment. Even when these potatoes are passed through a food mill or ricer, they’ll remain lumpy and grainy.

Chef Malivert also cautions that it’s easy to overcook potatoes using this method. Overcooking potatoes will lead to a watery dish. During boiling, cells of the potato take on water and burst, releasing the sticky starch. The newly available starch will pull even more water into the potato. According to Malivert, potatoes are already approximately 80 percent water, and it’s simply not necessary to introduce more. Even worse, when the available starch has absorbed water molecules, it’s essentially tied up. The potatoes won’t be able to absorb more flavor when it’s time to add the cream and butter. If you’ve already chosen this method, there’s still hope. Chef Malivert advises that if your potatoes are too wet after boiling, you can place them in a warm oven to dry before you add the butter and the cream. When the water evaporates, the starch will become available again.

Boiling potatoes whole will prevent this from happening. The skin forms a seal around the potatoes, locking in the starch and pectin. To do this, place the potatoes in a pot of cool water and bring the entire pot up to boil with the potatoes inside. When a whole potato is dropped into a pot of boiling water, the heat starts working from the outside in. The outer layer of the potato can overcook by the time the center becomes soft. By starting in cold water, you can bring the entire potato up to temperature slowly along with the water. This will result in more even cooking. Once boiled and cooled, the skins can be easily removed. Chef Malivert, however, prefers another method entirely. For the most flavorful result, Malivert bakes his potatoes whole before mashing. This prevents the introduction of additional water and leaves all of the molecules available and ready to absorb butter and cream.

After cooking, it’s important to process the potatoes as gently as possible. You want to achieve a consistent texture without overworking the mash, damaging the cell walls, and releasing too much starch. Food mills, food processors, electric mixers, and ricers are all common methods of pulverizing potatoes. Chef Malivert prefers a ricer. Using this method, each potato is processed only once. It passes through the ricer and comes out on the other side with a smooth consistency. In a food processor or electric mixer, the blade passes through the potatoes many times, until all of the lumps have been pureed. This can lead to overworking. To mitigate these effects, Malivert recommends working in small batches. Place one potato at a time in the bowl of a mixer, blend until just mashed, then remove and repeat with the next potato. This will prevent some portions of the potato from being beaten into a paste while others are still whole.

Once the potatoes are mashed, it’s time to incorporate flavor. Working gently, add butter and then cream. To minimize starch release, chef Malivert recommends using a spatula instead of a whisk to finish your dish.

Creamy mashed potatoes are another dish entirely. French-style pommes purées are intended to be soft and runny, like a bowl of butter and cream loosely held together by potatoes. Here, it’s possible to work the potatoes slightly more. Smooth and saucy mashed potatoes contain more cream than light and fluffy spuds. Releasing slightly more starch is the key to holding this dish together, but it’s still a delicate balance.

To achieve their luxurious texture, pommes purées start with a slightly waxier potato, like the medium-starch Yukon gold. Delicate processing is still key. Even with a purée, there’s a fine line between creamy and gluey. Process these potatoes with a ricer, and then continue to beat until they are completely smooth. This can be done with a whisk or an electric mixer. Whipping until completely smooth releases more starch. In this dish, that is necessary to absorb the higher cream content. Far from gluey, pommes purée will be rich, decadent, and saucy.

Malivert describes the difference between creamy and fluffy mashed potatoes as a matter of personal preference, not so much about the style of a country but about the taste of the chef.

In either case, the worst outcome is a gluey mashed potato. This means the starch has been overworked, and the potatoes are bound into a big lump. If this happens, there isn’t a quick fix. As chef Malivert described, “once you have overdeveloped the starch, there’s nothing you can do to fix it, the best thing you can do is add more liquid and make a soup.”

At their core, mashed potatoes are still a simple dish. You don’t need a Master's degree in chemistry, or even a firm grasp of the definition of an ion, to make a pillowy bowl of potatoes for your Thanksgiving table. Although you don’t need to calculate the exact starch content of your spuds before cooking, an understanding of the science at work underneath the gravy may enhance your appreciation of humble potatoes.

TASTE OF THE HOLIDAYS is an INVERSE series about the science of food. Get the inside scoop on your favorite (or hated) nostalgic holiday dishes via our hub, which will update with new stories through December 2022.