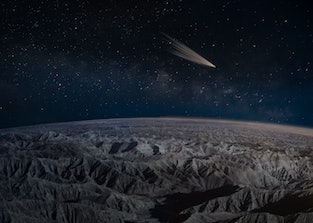 Astronomers discover an unexplainable chemical phenomenon at work in comets

Comets may appear like the ice queens of the Universe — shining bright, absolutely freezing, and unapproachable. But fresh data released earlier this year quickly melted away that conception and dazzled scientists, leaving a slew of new cosmic conundrums in their wake.

The discovery — For the first time ever, astronomers identified vaporized iron and nickel in the atmospheres of comets, leaving the field dumbfounded. The two papers, published in Nature, elaborate on the characteristics of both the interstellar comet 2I/Borisov and our Solar System’s own comets. Long story short, we don’t know as much about these blazing orbs as we thought we did.

INVERSE is counting down the 20 science discoveries that made us say “WTF” in 2021. This is #8. See the full list here.

Digging into the mystery — Comets are the icy dregs of the material that made up the Solar System. Their interiors typically contain metal elements like iron, nickel, copper, cobalt, and manganese. This makes sense when considering comets’ origin story: After all, rocky planets like Earth are full of the same metals.

Rather, the mystery is how there came to be iron and nickel gasses streaming from any comet, never mind specific comets we are familiar with here on Earth. Iron and nickel need to get to above 725 degrees Celsius to exist as gasses — baffling considering comets are ice balls with extremely cold coronas. The finding becomes more curious still when you do get specific — why is it that both Solar System comets and interstellar comets have this weird quality?

This line of reasoning led the researchers to a new hypothesis: Is this trait not weird at all, but instead a common feature of all comets which originated near or far from Earth.

“The short answer is we don’t know,” Steven Bromley, a postdoc at Auburn University and co-author on one of the papers, told Inverse at the time. There are some theories, however.

The scientists lay out three potential theories to test in future research:

How they did it — Researchers spotted these metals by using archival data gathered in 2002 by the European Southern Observatory’s Very Large Telescope in Chile. They noticed nickel and iron vapor emanating from the surfaces of 20 different comets. The orbs are typical denizens of the edge of the Solar System, but they were spotted while passing through the inner Solar System.

The 20 comets all appeared to be shedding the metals at great speeds, as fast as a gram per second. Comet 2I/Borisov — which comes from beyond our stellar neighborhood — shares the tendency for leakage.

Why it matters — Comets act like foundational texts for reading the origins of the Solar System. They are relics of an early period of planetary creation. From this chaos, there emerged the bodies we know — and exist upon — today. But they can also tell us about how these original acts play out in other star systems, too, as is the case with Comet 2I/Borisov.

Understanding the chemical processes at work in these space rocks can help us understand our planet’s own birth.

INVERSE is counting down the 20 science discoveries that made us say “WTF” in 2021. This is #8. Read the original story here.

More like this
Science
Jan. 19, 2023
Our Solar System may be surrounded by a halo of 10 million interstellar objects
By Kiona Smith
Science
Jan. 12, 2023
Astronomers find a group of zombie stars 20 times hotter than the Sun
By Jeff Nagle
Science
Jan. 26, 2023
Scientists find two key ingredients for life in ancient meteors
By Jeff Nagle
LEARN SOMETHING NEW EVERY DAY.
Related Tags
Share: