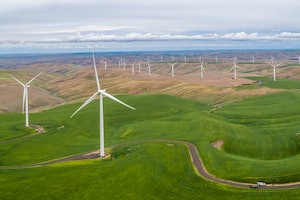 8 reasons why the political argument against climate action is wrong

Fighting climate change is expensive, which makes it controversial. One of the major criticisms of the much-touted push for a Green New Deal has been the cost. Some conservative green-energy activists blanch at what one described as the “home-run giga-packages” included in the Deal. Essentially, liberals have thrown the kitchen sink in the Deal, so the argument goes, trying to shoehorn in far greater — and far more expensive — reforms than necessary.

But here's the thing — this argument is slowly losing power.

What's new — In a recent study published study in the journal AGU Advances, a team of scientists set out the case for eight steps to make the United States a carbon-neutral country by 2050.

Not only that, but the price of achieving this 8-step plan is significantly lower than in past years. Jim Williams is an associate professor at the University of San Francisco and a co-author of the study. He tells Inverse that the cost of a full-scale climate transformation has gone down dramatically — perhaps surprising, given the ever-mounting toll climate change continues to exact as we let things get worse and worse.

In other words, he says, “it costs half as much to achieve a much more difficult goal.”

Why it matters — Democrats are generally in favor of climate action, but there are serious disagreements within the party on how to move forward. West Virginia Senator Joe Manchin, for example, is vehemently against the idea of a carbon tax — a key component of the Green New Deal — and instead called for an energy transition to occur in a “reasonable way.”

Manchin suggested tying climate legislation to infrastructure. He's in luck: according to Williams' study, fighting climate change through massive infrastructure projects is worth every cent.

The cost of doing nothing has remained sky high. According to a September 2020 study written by a task force for the Commodity Futures Trading Commission, a U.S financial regulator, climate change could wreck havoc on American financial systems. Climate and pollution-related damages could cost anywhere between “$50 trillion to $142 trillion,” and inaction could see $19.5 trillion worth of stranded assets by 2050.

Yet those damages hardly reflect the total cost of climate change. Warming temperatures affect nearly every aspect of society. There are health-related risks, from higher rates of allergies, depression, and cancer. There are the added costs of caring and housing climate-related refugees, whose numbers could rise as high a billion.

Digging into the details — Reaching a net-zero on emissions is a tall order, given the U.S. Energy Information Administration estimates, in 2019, the United States emitted 5.13 billion metric tons of energy-related carbon dioxide.

But Williams and his colleagues say their eight steps, if taken prior to 2030, could help dig us out of this hole.

Here are the eight steps:

Each of the eight steps relate to what the researchers describe as “four pillars of deep decarbonization.”

The authors explicitly link their proposed climate action to economic development, mirroring the jobs and prosperity promise of the Green New Deal. Margaret Torn, one of Williams' co-authors and a scientist at the University of California, Berkeley, said in a press statement accompanying the research:

“The decarbonization of the U.S. energy system is fundamentally an infrastructure transformation.”

The team mapped their pathways to carbon neutral using projected scenarios from the National Renewable Energy Laboratory and the U.S Energy Information Administration. These scenarios ranged from a world in which “no fossil fuels or nuclear power allowed by mid‐century,” to slower adoption of low‐carbon technologies.

The cost of these different scenarios varied, ranging from anywhere between 0.2 percent to 1.2 percent of the Gross Domestic Product of the United States. By 2050 this has been estimated to amount to more than $41 trillion.

Where do these lower costs come from?

“The main reason is that the cost of wind and solar power and batteries for electric vehicles have declined faster than expected,” Torn says in a press statement. Indeed, the price of solar energy has drastically dropped in the last decade. And electric vehicles have been taking advantage of cheaper battery prices.

The range accounts for the tradeoffs some of the study's pathways demand, according to the researchers. In a scenario where the entire United States is powered by solar, wind, and bioenergy, expenses would rise because of the cost of buying up all the land needed to build giant clean-energy farms.

What we don't know — Spencer Nelson, a researcher at conservative energy advocacy group Clear Path, tells Inverse the study does a “good job of showing what is technically possible,” but the “practical feasibility of achieving any one of these pathways is extraordinarily difficult.”

History is, in some ways, on these researchers' side. In 2017, six energy efficiency initiatives resulted in a 20 percent reduction in energy use, according to Resources for the Future, a think-tank. With more carbon capture, biofuels, and electric fuels, the researchers say, the U.S. energy system could get to “net negative” — taking in more carbon dioxide than it puts out, and effectively removing 500 million metric tons of CO2 from the atmosphere each year.

“When you're trying to manage carbon emissions on this scale, you're going to need to have ways to capture carbon from point sources like power plants,” Nelson says.

Carbon-capture technology of this kind is an unproven, technological fix for climate change that has many supporters, others have nothing but skepticism.

The “net negative” pathway, the one that removes 500 million metric tons of carbon dioxide per year, relied on carbon capture more than any other. It would have a net cost of 0.6 percent of the U.S. GDP in 2050, according to the study.

What's next — The cost of doing anything is not nothing, but it may come with economic gain, these researchers say.

“All that infrastructure build equates to jobs, and potentially jobs in the U.S., as opposed to sending money overseas to buy oil from other countries,” Torn says.

There is an “inherent uncertainty” in these kinds of models, Nelson says. Predicting several years in the future is a difficult task at the best of times, especially during times of massive upheaval, like the Covid-19 pandemic, and political unrest.

The pressure is rising on the Biden Administration to take drastic action on the climate. In early February, Alexandra Ocasio-Cortez, Earl Blumenauer of Oregon, and Bernie Sanders, proposed a National Climate Emergency Act, which could give the president widespread powers by declaring a climate emergency.

The future is unwritten, but the eight steps outlined in this study offer a clear path forward, Williams says.

“We should make policy to drive the steps that we know are required now, while accelerating R&D and further developing our options for the choices we must make,” he says.

Abstract: The Intergovernmental Panel on Climate Change (IPCC) Special Report on Global Warming of 1.5°C points to the need for carbon neutrality by mid‐century. Achieving this in the United States in only 30 years will be challenging, and practical pathways detailing the technologies, infrastructure, costs, and tradeoffs involved are needed. Modeling the entire U.S. energy and industrial system with new analysis tools that capture synergies not represented in sector‐specific or integrated assessment models, we created multiple pathways to net zero and net negative CO2 emissions by 2050. They met all forecast U.S. energy needs at a net cost of 0.2–1.2% of GDP in 2050, using only commercial or near‐commercial technologies, and requiring no early retirement of existing infrastructure. Pathways with constraints on consumer behavior, land use, biomass use, and technology choices (e.g., no nuclear) met the target but at higher cost. All pathways employed four basic strategies: energy efficiency, decarbonized electricity, electrification, and carbon capture. Least‐cost pathways were based on >80% wind and solar electricity plus thermal generation for reliability. A 100% renewable primary energy system was feasible but had higher cost and land use. We found multiple feasible options for supplying low‐carbon fuels for non‐electrifiable end uses in industry, freight, and aviation, which were not required in bulk until after 2035. In the next decade, the actions required in all pathways were similar: expand renewable capacity 3.5 fold, retire coal, maintain existing gas generating capacity, and increase electric vehicle and heat pump sales to >50% of market share. This study provides a playbook for carbon neutrality policy with concrete near‐term priorities.