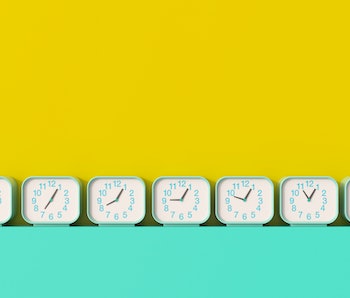 Humans spend about one-third of our lives asleep, but scientists still don’t fully understand how sleep works and why some people have different sleep habits than others. “Natural short sleepers” are a perfect example: The average person requires seven hours a night, but these folks only need about four to six hours of snooze time.

In August 2019, scientists discovered that these natural short sleepers have something unusual — a mutation in the gene ADRB1. The finding suggests genetics may — at least in part — underlie natural short sleepers’ tendencies. Understanding why they need different doses of daily rest than the average Joe could help scientists finally pinpoint just how much sleep humans really need to be well-rested.

Lead study author Ying-Hu Fu, a neurology professor at UC San Francisco, told Inverse at the time she hoped the finding would not “only bring relief to those who suffer from sleep problems, but increase sleep efficiency for everyone to ensure healthy aging.”

Fu and her team analyzed a family of short sleepers’ genes and found that they all carried mutations in ADRB1. The gene is involved in neurons in a brain region called the dorsal pons which play a role in regulating sleep-wake behavior.

From there, they compared the mutated ADRB1 gene’s protein to that of a non-mutated version, and found that the mutant version of the protein was less stable. This suggests that the mutation doesn’t interact with the neurons as expected — that may explain why carriers of the genetic variant have an atypical sleep-wake cycle.

To confirm their results, the researchers bred mice with the mutated ADRB1 gene and compared them to controls. The mutant mice woke up 55 minutes earlier than the control mice on average. They also saw that the gene was expressed at high levels in the mutant mice’s brains’ dorsal pons region.

Untangling the genetics underlying sleep could one day help people get better at sleeping, said Fu. Her team has also found that natural short sleepers may carry a different mutation in the DEC2 gene, which helps regulate circadian rhythms. And there are likely more discoveries to come as scientists get to grips with the biology of this universal human activity.

As 2019 draws to a close, Inverse is counting down the 25 science stories from this year that made us say “WTF.” Some are incredible, some are icky, and some are just plain strange. This has been #2. Read the original article here.

More like this
Mind and Body
20 hours ago
Does the Best Workout Exist? Exercise Scientists All Agree on One Thing
By Katie MacBride
Mind and Body
18 hours ago
Swapping Cigarettes for Vaping May Help You Quit — but There’s a Catch
By Elana Spivack
Mind and Body
Jan. 29, 2023
How to take advantage of a bad mood
By Sarah Sloat
LEARN SOMETHING NEW EVERY DAY.
Related Tags
Share: