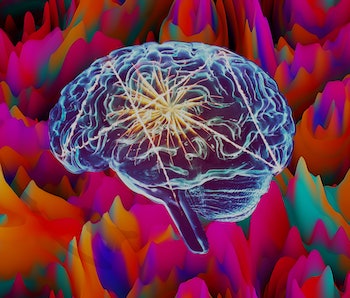 The overwhelming hallucinations, euphoria, and dream-like state that are the hallmarks of a lysergic acid diethylamide (LSD) trip may stem from the brain going into sensory overload.

That’s the takeaway from a paper published in January 2019 which laid out evidence for a leading theory of what happens to the brain on LSD, suggesting that the chemical alters how a specific region of the brain that helps us make sense of sensory information works.

The thalamus acts like a kind of sensory gatekeeper. As sensory information from the environment comes in, the thalamus filters out the unimportant bits, allowing the brain to process and react appropriately to the information that demands attention — like a car horn beeping to warn you not to jaywalk, or a flashing warning light.

But that’s only if the thalamus is working as it should be. In a 2008 paper, two researchers proposed that psychedelic drugs like LSD interfere with the thalamus’ filtering abilities, causing the brain to go into sensory overload.

The January 2019 paper adds weight to that theory. The researchers homed in on serotonin, a neurotransmitter that has been linked to psychedelic drugs in the past.

To test whether serotonin might be involved in the thalamus during an LSD trip, the researchers gave 24 people LSD and blocked their serotonin receptors. The participants then did a 5-Dimensions Altered States of Consciousness questionnaire to figure out who tripped. Surprisingly, “all LSD-induced subjective drug effects were blocked” as a result of the serotonin-blocking.

By looking at the participants’ brain activity during the LSD trip, the researchers found that the drug reduces the activity in a neural circuit — specifically the striatum’s influence on the thalamus. That opened up the thalamic filter to a specific part of the cortex called the posterior cingulate cortex.

“In particular, the present results pinpoint the role of the thalamus–PCC connection for the effects of psychedelics,” they wrote.

Working out what, exactly, happens to the brain on LSD could hold benefits for people with psychosis and other psychiatric issues, which can have symptoms reminiscent of the affects of a trip. Along with other psychedelics like psilocybin, LSD is attracting significant attention from the medical community as a treatment for everything from alcohol use disorder to depression.

As 2019 draws to a close, Inverse is counting down the 25 science stories from this year that made us say “WTF.” Some are incredible, some are icky, and some are just plain strange. This has been #12. Read the original article here.

More like this
Innovation
Jan. 16, 2023
3D-printed “organs” could lead to better drugs
By The Conversation and Chengpeng Chen
Mind and Body
Jan. 21, 2023
Procrastination study suggests a link to shoulder pain, bad sleep, and more
By Eva Skillgate, Alexander Rozental, Fred Johansson and The Conversation
Mind and Body
20 hours ago
Does the Best Workout Exist? Exercise Scientists All Agree on One Thing
By Katie MacBride
LEARN SOMETHING NEW EVERY DAY.
Related Tags
Share: