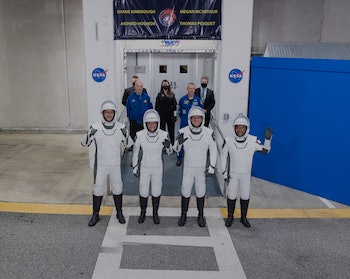 With all-civilian missions and reusable rockets already behind us, space travel is starting to feel the most accessible it’s ever been. Ready to check out the great beyond yourself? With SpaceX’s reusable rockets, you could get there sooner than you might think.

But don’t take it from me — hear out David Anderman, who served as SpaceX’s general counsel during the time it flew its first crewed mission. Now, Anderman is advising the producers of the reality TV show Space Hero, which plans to send one lucky winner to space (see Musk Reads+ #61).

In short, he is working to open up space to more people than ever — and thanks to the Starship, SpaceX could find itself working more like an airline. That’s also going to mean regulations will have to catch up.

Want to know more about why the Starship is like the Model T, how space stations will fit into the plan, and how regulations could adapt to fit the new reality? Read the full interview, only in MUSK READS+.

Anderman spoke to Inverse on the day SpaceX launched the Inspiration4 mission. The company described it as the first all-civilian mission to orbit.

Although the accolade is a point of contention — Jonathan McDowell, an astrophysicist at the Harvard-Smithsonian Center for Astrophysics, claimed there were 15 such flights before Inspiration4 — the video footage of the four novices in space made for a powerful image.

What a bathroom view!

“What's amazing is we've gotten to the point in the space industry where a regular person with enough resources today can purchase a mission,” Anderman tells Inverse. (The price tag is still currently in the several million dollar range.)

Part of what’s helped with this is the rapid reduction in the cost of spaceflight. This is evident with the gradual drop in satellite prices:

“The types of rapid decrease in cost that you're seeing in the launch business for satellites — you're going to see a similar thing happen with respect to human spaceflight over the next few years,” he says.

TO READ THE FULL INTERVIEW, SUBSCRIBE TO MUSK READS+.

Here is what you will gain from subscribing to MUSK READS+:

MUSK READS+ is a fully independent operation. We are not Elon Musk, nor are we employed by him. Our job is to report the events we find important, giving you the inside look at the worlds of space rockets, electric cars, clean energy, and more. It means first-hand accounts of a SpaceX rocket launch, Tesla insights from third-party analysts, and more.

More like this
Innovation
8.8.2022 10:00 AM
A wild new plane-train hybrid could whoosh you to your destination — if it can get off the ground
By Molly Glick
Innovation
8.13.2022 9:00 PM
Electric vehicles could transform U.S. cities — but not for the reason you think
By Erica D. Walker and The Conversation
Innovation
8.17.2022 6:15 PM
Can we terraform Mars? Scientists may have made a major breakthrough
By Jeff Nagle
Related Tags
Share: