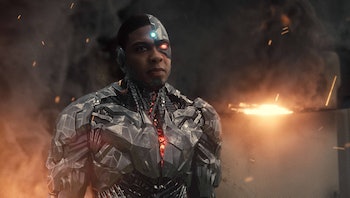 One of the most rewarding scenes in superhero movies, comic books, and TV shows is as subtle as it is enduring. It’s when the hero performs an action that’s straightforward for them but life-changing for the recipient.

The good deed could be our caped crusader snatching a runaway stroller from being hit by a bus, or our hero swooping down to the sidewalk from 30 stories up to help an octogenarian cross a busy street. It’s a trope! It’s also great!

These acts of on-screen kindness have become rarer in superhero movies in recent years, often replaced with exhausting, world-building plot machinations. Swapping out that opportunity for a little soul, replacing it with an in-universe story chum that’s meant only to justify a spinoff series for an OTT app? Feels like robbery.

That’s not the case with the latest superhero movie. Director Zack Snyder recently released on HBO Max his “Snyder Cut” version of Justice League — the four-hour version of a production he left because of a personal tragedy nearly four years ago. Director Joss Whedon finished out the project, reduced the run time, and made a number of other changes. The movie was panned. Not so with the Snyder Cut, which shocked most of us by the mere fact that it’s actually pretty good, defying expectations for a project of this sort.

One thing the Snyder Cut does so well, according to senior staff writer Eric Francisco, is reviving this small act of heroism. Read his excellent essay on the matter here: “The Snyder Cut's best moment reveals a huge flaw in all superhero movies.” (It involves Cyborg, the hero you see above, a single mother of two, and a bank account.)

This is an adapted version of the Inverse Daily newsletter for March 25, 2021. Subscribe for free and earn rewards for reading every day in your inbox.

Soy boys — Contributing writer Kate Bratskeir writes about the rise of tofu during the pandemic and what it could mean for the future of the food:

Across America, home cooks discovered tofu during the pandemic. Sales skyrocketed and Google searches for tofu recipes doubled in 2020.

Against all odds, the affordable, healthy, back-of-the-fridge staple found itself perfectly positioned for a moment when meat production was faltering and people were trying their best to avoid crowded grocery store aisles.

Thanks to Covid-19, 2020 might just be the year tofu went mainstream in the U.S.

A hairy situation — Contributing writer Sophia Quaglia reports on a presentation this week at a medical conference that links male pattern baldness to a condition thought to only affect women. While it’s early days yet, the research could help pinpoint who goes bald and why.

Polycystic ovary syndrome — as the name suggests — is a disease typically associated only with women, and scientists don’t know much about what drives the syndrome.

But despite the name, a version of the syndrome can affect men, too. For the first time, researchers show the primary cause of polycystic ovary syndrome may not depend on the ovaries at all.

By testing male relatives of women with the syndrome, scientists found a genetic component to the condition, which, in men, can lead to male pattern baldness, risk of obesity, diabetes, and heart problems.

The lead researcher on the study, Jia Zhu, tells Inverse the new evidence prompts a rethink. “This tells us that men can have a PCOS-like condition that we still need to better understand and define,” she says.

But beyond its spiritual associations, intermittent fasting is currently popular as a diet (though it’s technically an “eating pattern”) designed to help people live longer and healthier. The question is: Can it actually deliver?

This is something scientists are working toward figuring out. It is known that, whatever your reasons for abstaining from food are, your body chemistry undergoes a number of changes when you fast. New research is helping to make sense of them, especially when it comes to the type of body fat actually affected.

Covid-19 and hearing loss — The link between contracting Covid-19 and losing one’s taste and smell is well established. However, new research and anecdotal reports suggest Covid-19’s attack on the senses may go beyond those senses — extending to the ability to hear, reports staff writer Katie MacBride.

Researchers from the Manchester Centre for Audiology and Deafness have reviewed all the case studies of Covid-associated hearing loss they could find and now warn the public of the possible link. (They published their findings Monday in the International Journal of Audiology.)

After reviewing the available studies, the researchers from Manchester estimate the prevalence of tinnitus among Covid-19 patients is 14.8 percent. While they caution that many of the reports they reviewed are based on self-reported accounts, other reports jibe with what was found, suggesting tinnitus is a common symptom of “long-Covid.”

That wraps up this edition of Inverse Daily. I wanted to thank everybody for reading so loyally! You can follow me on Twitter @nicklucchesi, where I share some of my favorite stories from Inverse, Input, and Mic every day.

One more thing...Happy birthday, Jim Lovell. Born on this day in 1928 in Cleveland, Lovell is one of just 24 people to have flown to the Moon (and the first to have gone to the Moon and back twice). He was the command pilot on the Apollo 8 and Apollo 13 missions, the latter of which saw a critical failure and a breathtaking return to Earth. The 1995 movie Apollo 13 is based on his book, Lost Moon. (Tom Hanks played Lovell in the movie and Lovell even has a cameo appearance.)

More like this
Science
8.10.2022 3:00 PM
Asteroids may have carved Earth's landforms as we know them — study
By Doris Elín Urrutia
Innovation
15 hours ago
Want to take a road trip in your electric vehicle? Prepare to go off track
By Molly Glick
Innovation
1 hour ago
Prolific Tesla beta-tester reveals what Full Self-Driving 10.13 needs to fix
By Andrew Moseman
Related Tags
Share: