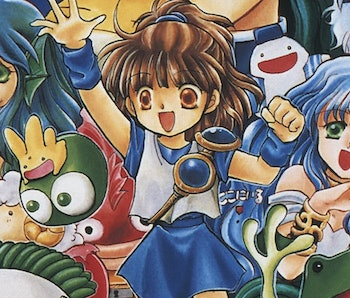 A crucial 1994 lawsuit, Capcom U.S.A. Inc. v. Data East Corp., established an important concept in the world of video games: scènes à faire. Like the accents suggest, this is a French concept that translates to “scene that must be done.” The idea is crucial to copyright law, and acknowledges that sometimes ideas will overlap in two different artistic projects.

In Capcom, a judge found that even though the game Fighter’s History closely resembled Street Fighter II, this would also be true of any one-on-one martial arts fighting game. Capcom couldn’t own that general idea, which meant that Fighter History was given the legal okay to be an SFII ripoff.

Another video game concept that couldn't be copyrighted is tile-matching. Tile-matching video games started in the Soviet Union with Tetris, but the idea rapidly spread around the world. The same year that a judge handed down a ruling in Capcom v. Data East, a tile-matching game, Super Puyo Puyo 2, was showing how successful a not-entirely-original experience could be. It’s available right now if you’ve subscribed to Nintendo Switch Online + Expansion Pack.

Super Puyo Puyo 2 is the sequel to Puyo Puyo, a tile-matching game that replaced the four-piece tiles of Tetris with cute little blobs attached to each other, two-by-two. Get four of them to attach together and then they’ll disappear. The game adds a further challenge by throwing out so-called garbage blocks, transparent blobs that must be worked around and cleared by clearing foursomes surrounding them.

Super Puyo Puyo 2 expands on the concept in a few ways. There’s a story mode, which is in Japanese, so I didn’t understand what was going on. According to a fan wiki, “in an attempt not only to steal Silvana's heart, but also to nab Carbuncle, the Dark Prince sets up a battle tower, in which Silvana has to beat characters on each floor to climb up the tower.” This makes enough sense for the game, which has cute cutscenes with a young schoolgirl taking on a variety of equally cute enemies.

Garbage blocks in Puyo Puyo 2 can be cleared when a chain near them is connected. But something must have been lost in translation, because no matter how many I cleared, a wave of them would suddenly get dumped on my board. Using the Switch’s rewind feature, I would play through moments in my game again and again, and no matter how much more efficient I got at matching colors, or how much more consideration I placed on the location of my matches, so they would be touching more garbage blocks, I couldn’t hold back the overwhelming waves.

Puyo Puyo 2 is a challenge only enhanced by the language barrier, especially when I didn’t find any English explainers readily available. I tried browsing Puyo Nexus for any hints, but the wiki didn’t seem to offer any hints, the forum appears to have shut down in 2018, and the Discord link offered as a replacement is no longer valid. The best explanation I found was on an English language playthrough that offers some clear-cut rules.

It might help to learn how the game works beforehand, but either way I found Puyo Puyo 2 intriguing.