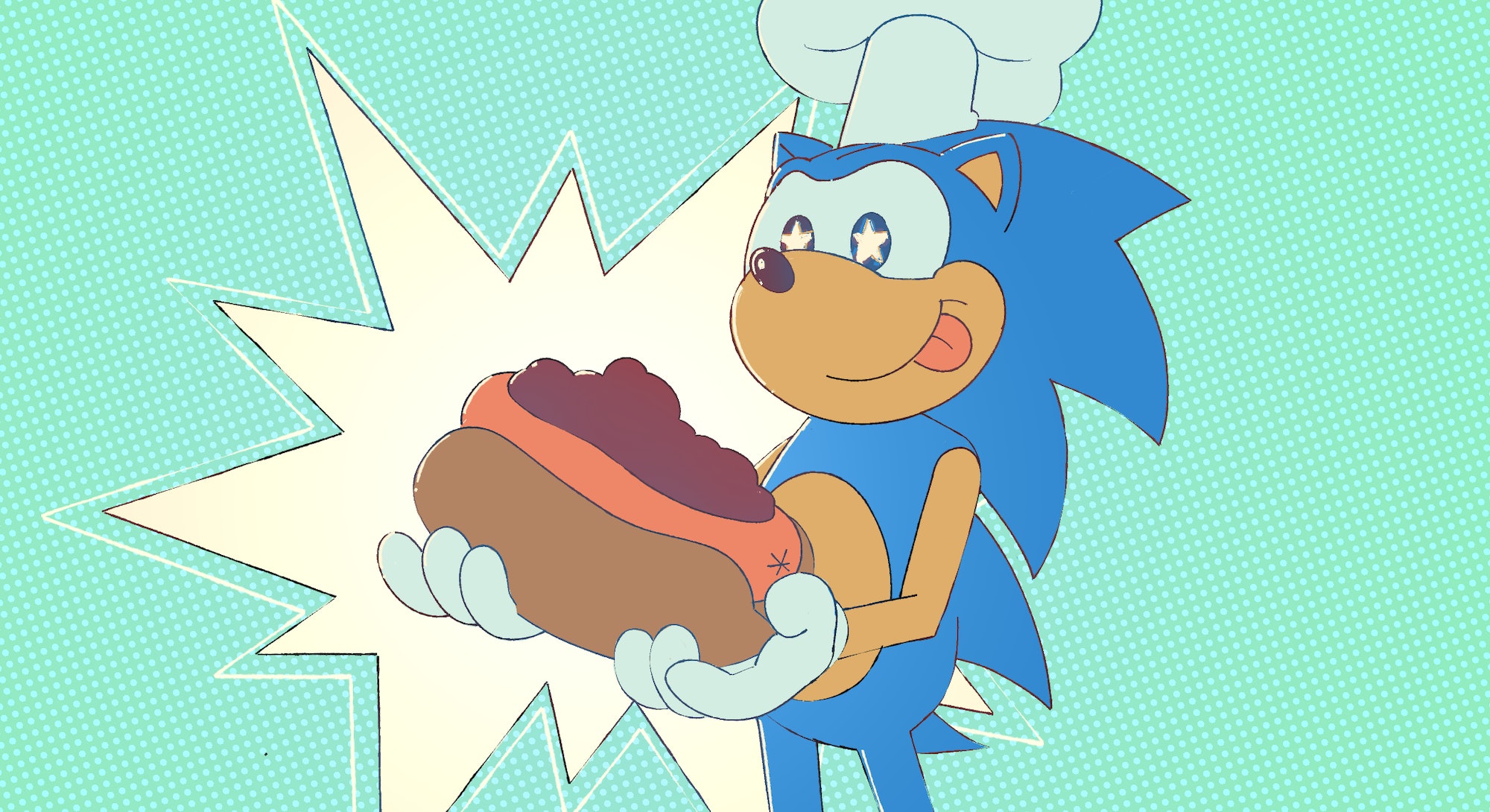 Carrots are not a rabbit’s favorite food. They are just as happy eating lettuce, peppers, and hay.

This artificial association is wholly the fault of Bugs Bunny, and inspired by Clark Gable’s character Peter “Doc” Warne in the 1934 romantic comedy It Happened One Night. If this is a shock to you, don’t feel bad. I only just learned it myself.

I’ve been delving even deeper into an even more audacious food-toon pairing: Sonic and chili dogs.

Why does Sonic the Hedgehog eat chili dogs? What about chili dogs screams “hedgehog” or “speedy”? Why wouldn’t Sonic opt for mealworms, like an actual hedgehog might consider? And should a hedgehog even eat a chili dog?

I reached out to the Woodlands Animal Sanctuary to double-check my assumption that hedgehogs shouldn’t eat chili dogs.

“You are right. It is NOT ok for hedgehogs to eat a chili dog!” Terry, office coordinator of the Woodlands Animal Sanctuary in Holmeswood, England, tells Inverse.

Sonic the Hedgehog’s love of beans on meat was memetic before we had ‘memes.’ Food and hero have coexisted comfortably in the minds of fans for decades now, and this association runs so deep that it eventually made its way into the blockbuster live-action films.

One thing is certain — the mythos did not originate on Sega’s end. Sonic didn’t even eat a chili dog in-game until 2008’s Sonic Unleashed, better known as the one where he turns into a giant hairy monster (not related to eating a chili dog). So where did this bizarre animal diet come from? To find the answer we’ll have to dive deep into an era of cross-promotional video game brand synergy (aka, the ‘90s).

Sonic has always been bigger than his games. His universe and its extended cast of characters have hitchhiked to glory in the backseats of unusually devoted fans. On top of the two recent feature films, Sonic inspired no less than five TV shows between 1993 and 2017, as well as an Archie Comics series that ran for over 20 years.

Sonic’s favorite snack originated in the cartoons and comic books from the early ‘90s, back when Saturday morning tie-ins were plentiful. Father-and-son writing duo Bruce and Reed Shelly worked on a number of these animated series, from The Legend of Zelda to Mutant League.

According to Reed, it was likely Bruce who came up with the idea.

“This smells like my father,” Reed tells Inverse in an email regarding the chili dog origins. “Writing with my Dad was wonderful. He was a craftsman and was willing to share with me and everyone he worked with his knowledge and skills.”

That said, Reed says his father “has no clear memory” on the chili dog matter.

Sonic's love for chili dogs first appears in the Sonic the Hedgehog story bible, written by the Reeds and Len Janson and dated February-March 1992. In it, Sonic’s Uncle Chuck made chili dogs and Sonic was the enthusiastic delivery boy.

These production bibles were used to maintain consistency between animators, writers, and merchandising partners. Sonic was such a firecracker phenomenon that DiC Entertainment (the production company behind animated shows like Inspector Gadget and Where on Earth Is Carmen Sandiego?) produced two simultaneous cartoon series starring Sonic and Tails.

Confusingly, both animated shows featured the voice of Jaleel “Urkel” White as Sonic, but were tonally opposite. The Adventures of Sonic the Hedgehog was a zany, Looney Tunes cat-and-mouse affair between Sonic and the hotheaded Robotnik, while Sonic the Hedgehog was a darker sci-fi adventure with an ongoing plotline where Robotnik has conquered the planet.

Chili dogs emerge almost immediately in the production bible for The Adventures of Sonic the Hedgehog, authored by the two Shellys and dated October 1992. Here’s an excerpt of Sonic at his Poochiest:

Name's SONIC. Species' HEDGEHOG. Attitude's IN-YOUR-FACE TEEN. Profession's FREEDOM FIGHTER. Fast Freedom Fighter. Actual speed? Some call it Ultra-Sonic. Others call it Super-Sonic, Trans-Sonic, Hyper-Sonic, and break-neckin', ear-splittin', trail-blazin', smoke-spittin', mind-trippin', one-of-a-kind, buttnik-kickin Warp-Sonic! When I'm WARPIN', I can open the refrigerator door and raid it for chili-dog makings before the light goes on. What can I say? I'm fast.

The bible for Adventures acknowledges the other series. Sonic describes it as follows:

“Some of my old friends and fellow Freedom Fighters are hidin' out in a place called Knothole in the Great Forest area that would be like your New Jersey. But that's a whole 'nother story. (one that may be seen on Saturday mornings -- and Saturday mornings only.) In this show, Tails and me never go to Robotropolis or Knothole. We're too busy runnin' for our lives over the rest of the continent.”

How these production bibles brought hedgehogs and chili dogs together requires one more Super-Sonic leap of faith.

When Sega developed Sonic, it was looking for a mascot to rival Mario and emphasize the lighting-fast capabilities of the Genesis. Through designs collected in an internal contest, the star of this new game began as a rabbit, and even briefly became Dr. Robotnik himself, before the blue Sonic, originally named “Mr. Hedgehog,” won out.

Sega wanted a character who would capture the American imagination, and even polled random passersby in New York’s Central Park in the early ‘90s to finalize his design. For Sonic’s TV debut, this meant materializing a Gen-X, adrenaline-loving slacker who loved noshing as much as they loved torturing their elders. The production bible cites Sonic’s “teenage irreverence” as a superpower alongside their super speed.

“In the early development of characters, I was always looking for ‘signature’ attributes,” says Reed Shelly. “Actions, lines, attitudes — they were signposts for other writers and creatives to riff off, make better, and discover new things that aligned.”

Cartoon characters often have a favorite treat. Scooby has Scooby Snacks. Homer has Duff beer. Popeye needs his spinach. Even Superman likes beef bourguignon, though that’s the kind of thing you’re likely to learn from a pub trivia question no one answers correctly. Before getting to Sonic the Hedgehog, Shelly junior and senior worked together on The Super Mario Super Show in 1989. That cartoon similarly enforced that Mario would do just about anything for pasta. Mario regularly exclaimed it gave him “Pasta Power.”

“I can open the refrigerator door and raid it for chili-dog makings before the light goes on.”

Unlike chili dogs, Pasta Power didn’t stick around long. Maybe fans don’t like thinking too hard about Mario’s deeper Italian-ness, or the prospect of a lonely little nonna sweeping her stoop back in the old Mushroom Kingdom, shedding a single tear while wondering where her boys are. Maybe it just doesn’t vibe with Mario as easily as chili dogs metabolized into Sonic’s lore.

The pilot episode of Sonic’s cartoon opens with him nearly knocking over a chili dog stand with his G-force before gulping down two of them. Sonic didn’t eat chili dogs in his video games for the first half of his career, but in the collective imagination, he was sliding weenies down like Takeru Kobayashi.

Now, no amount of brand control will be able to reverse course. The hedgehog and the chili dog are inseparable. Two dogs in a pod.

This story has been updated to include further details about the Sonic animated show story bibles.