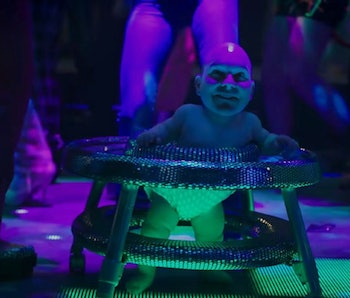 The undead of Staten Island have been reborn. Or, at least energy vampire and corporate cog Colin Robinson (Mark Proksch) has on What We Do in the Shadows. The soul-sucking bore perishes of “natural causes” at the age of 100 in the Season 3 finale, which is the typical expiration date for energy vampires, apparently. What happens to him next as part of an ongoing Season 4 arc is the riskiest thing the show has ever done — and it pays off in spades.

Just before the end of the Season 3 finale, a horrific neonatal version of Colin crawls out of his adult-sized self’s chest cavity — with Proksch’s face poorly superimposed on an infant’s body.

This resurrection gimmick would not work in almost any other show. But FX’s irreverent comedy-fantasy-horror-mockumentary has just enough panache, low-brow hilarity, and consistent cleverness to strike the right balance with Baby Colin. He’s sweet, disgusting, and absurd. He also still resides in a mansion full of old vampires. Shockingly, Baby Colin already feels more important to his housemates’ arc than he ever did as an elderly adult.

What We Do in the Shadows Season 4 begins with the Core Four reuniting after travels abroad — Nadja (Natasia Demetriou) and her talking Nadja clone-doll (also voiced by Demetriou), Nandor (Kayvan Novak), and Laszlo (show creator Jemaine Clement), who has been busy raising Baby Colin to be “interesting” at the manor. Baby Colin’s instruction consists of literature and art deemed worthy and “not boring” by the snobbish dandy, while all other babysitting duties are ignored.

Guillermo (Harvey Guillén), the vampire-slaying bodyguard of Nandor and reluctant henchman of the fanged friends, also makes his way back to the flamboyant home. He is immediately alarmed by Baby Colin’s perilous environment.

However, the gang soon finds that while they are (mostly) immortal, their Staten Island mansion is not. Neglect has made it far too dangerous for the potentially human Baby Colin. Nadja makes her case to the Vampiric Council’s Guide, played by Kristen Schaal, and is approved to transform the space into a nightclub, paying homage to both True Blood and Blade’s memorable takes on vampiric bars.

Baby Colin is integrated seamlessly into the series’ deadly discotheque arc with a surprising Episode 3 twist that delights the show’s characters, and will likely delight its viewers.

But, is Baby Colin really all that different from Adult Colin? Proksch’s comedic chops are utilized better than ever as a convincing youth (who may or may not be harboring an exhausting secret from the rest of his adoptive parents). It helps that the potential ruse is bolstered by Baby Colin’s’ lines, which were clearly written by people who know how to think up realistic kid characters. Baby Colin retains the naïveté and endless fascination of normal toddlers, even with Proksch’s adult uncanny valley face.

De-aging Colin, who isn’t quite as cute as The Mandalorian’s Baby Yoda or Guardians of the Galaxy’s Baby Groot to become an instant fan-favorite, was a huge creative risk, but it pays off. A CGI-plastered visage on a little body gives What We Do in the Shadows a facelift— a touched-up version of the already near-perfect horror sitcom.

While Baby Colin may be a youngster, What We Do in the Shadows’ brand of comedy remains as crass, inappropriate, and devilishly entertaining as always. Characters explore polyamory, polygamy, and even penis enlargement! It’s the same sort of cheeky potty humor established first by the movie of the same name created by Clement and Thor: Love and Thunder director Taika Waititi.

The FX show’s rebirth reminds us that we shouldn’t have to turn off our brains to enjoy content— not even if that content is meant to make you laugh— lest we miss out on the great television and films that make the most of the genre without insulting its audience’s intelligence. Thankfully, What We Do in the Shadows can be depended on to deliver.

What We Do in the Shadows Season 4 premieres July 12 on FX.