“Where we’re going, we won’t need eyes to see.” 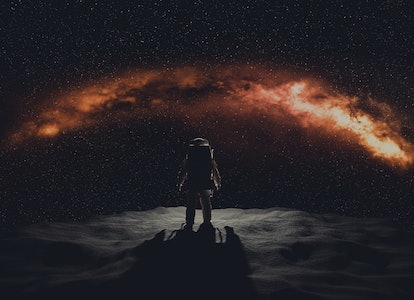 When you think of sci-fi horror films, a few classics inevitably come to mind, and those films played major roles in shaping how people view the genre.

But not all sci-fi horror movies are interested in being atmospheric slow burns like Alien or The Thing, nor do they even have the patience to be. Instead, some sci-fi horror flicks just want to scare you, gross you out, and straight-up make you wonder what it was that you just watched.

Event Horizon, released in 1997, falls squarely into the latter category of sci-fi horror films. It’s an utterly crazed, gonzo sci-fi adventure — a B-movie sci-fi horror flick that remains just as odd and strangely singular today as it was when it was first released over 20 years ago. And the good news? It’s streaming now on HBO Max.

Here’s why you need to add it to your watchlist.

Set in the year 2047, Event Horizon follows the crew of a spaceship called Lewis and Clark that is sent to help recover and explore the remains of an experimental spaceship that disappeared years prior only to reappear in our solar system near Neptune mysteriously. The recovered spaceship (known as the “Event Horizon”) was built with a revolutionary gravity drive that made it so the ship could create its own black holes and jump between two different points in space nearly instantaneously.

However, when the crew of the Lewis and Clark come upon the Event Horizon, they begin to realize that the circumstances surrounding the ship’s disappearance may have been far more distressing than they’d been led to believe. To make matters worse, there are signs that the ship itself may have been altered in some way during its time... adrift.

To say much more would be to spoil Event Horizon’s various twists and turns, of which there are many. Directed by B-movie extraordinaire Paul W. S. Anderson, the film is campy and pulpy in all the best ways — with the director and his collaborators indulging in levels of body horror and gore that are genuinely shocking to witness.

To their credit, many of the film’s cast members rise to meet the deranged quality of its back half. Lawrence Fishburne brings a steady, human heart to the film as its ostensible lead. At the same time, Sam Neill turns in an unforgettably unhinged performance as the man who built the film’s titular ship and who gradually emerges as a mad creator obsessively in love with his creation’s potential. The rest of the film’s cast includes consistent and dependable screen veterans, including Jason Isaacs, Joely Richardson, Richard T. Jones, and Kathleen Quinlan.

Event Horizon wasn’t a success when it was first released in 1997 — critically or financially. The film was generally panned by critics and earned only $42 million at the box office, coming off a $60 million production budget. To make matters worse, the film was subject to some last-minute studio interference on the part of Paramount, which forced Anderson to cut the film down from its original 130-minute cut far more than he wanted to.

Despite its lackluster original reception, the film has gone on to become a bit of a cult classic amongst sci-fi horror fans, and it’s not hard to see why. It’s a deliriously fun and twisted sci-fi horror flick, one that feels handmade and distinctive even after receiving some unnecessary, studio-mandated edits. There really aren’t many films like it, which is about the highest praise we can give Event Horizon.