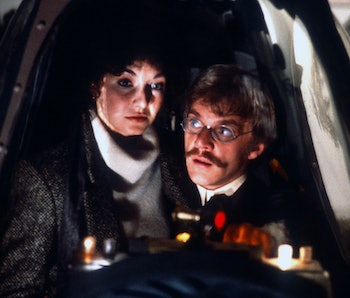 Some movies are hard to pitch to people who haven’t seen them, but not this 1979 sci-fi adventure. As a matter of fact, this movie has one of the most ludicrous but exciting plots of any film that you’ll likely come across.

Based on the novel of the same name by Karl Alexander, the movie follows a famous sci-fi author H.G. Wells as he travels in time to the 1970s searching for Jack the Ripper. The Victorian-era serial murderer used Wells’ time machine to escape justice at the start of the film. Pitting one of the greatest literary minds of all time against one of history’s most notorious (and mysterious) serial murderers, the film offers up a time-bending, cinematic cat-and-mouse game the likes of which you’ve truly never seen before.

To put it simply: Time After Time is one of the most underrated and charming sci-fi films of the 20th century but has, unfortunately, primarily fallen from the public consciousness in recent decades. Thankfully, it’s available to stream now on HBO Max. Here’s why you need to carve out some time for it ASAP.

One of the greatest joys of watching Time After Time is seeing how the film nimbly and (for the most part) successfully manages to mix elements from multiple different genres.

The film’s opening sequence, which shows us one of Jack the Ripper’s murders through the villain’s actual POV, feels like it belongs in a gothic horror or slasher film. Meanwhile, the rest of the first act feels like it was pulled straight from an actual H.G. Wells or Jules Verne novel, as the film’s version of Wells (played by Malcolm McDowell) unveils his newly-built personal time machine to a gathering of his friends.

When the mysterious Jack the Ripper steals Wells’ time machine, both Wells and Jack end up in the 1970s. From there, Time After Time adopts the structure and tone of a fish-out-of-water comedy before attempting to blend all of its different genre elements. Thanks to the presence of Mary Steenburgen’s Amy, a bank teller who takes a liking to McDowell’s Wells, the film even dips its toes into being a romantic comedy.

Tonally, that’s a lot for Time After Time to try and juggle. The fact that the film largely succeeds at doing so is a credit to its performers, all of whom help sell its various moments of darkness, romance, and comedy. Mary Steenburgen, in particular, is as charming as ever here, while David Warner brings a delightful bit of sinister depravity to the film with his memorably hammy turn as Jack the Ripper.

Visually, Time After Time isn’t the most arresting or sophisticated of films, with director Nicholas Meyer (better known for directing Star Trek II: The Wrath of Khan and Star Trek VI: The Undiscovered Country) keeping everything relatively dry and simple. The film’s opening POV sequence lands with that much more of an impact for this very reason, with its stylized construction standing far apart from the straightforward way that the rest of Time After Time is directed.

But what makes Time After Time genuinely shine is its story, with Meyer showing the same acute level of understanding of the sci-fi genre that he later demonstrated again in his Star Trek outings. It’s just as much a fun sci-fi romp as it is a tribute to Wells as both a writer and philosopher while honoring his beliefs and challenging some of them simultaneously.

Time After Time’s charms extend far beyond its memorable central premise. Although, it’s hard to deny how fun it is to see fictional versions of H.G. Wells and Jack the Ripper chase each other around late ‘70s San Francisco. When it comes to winning elevator pitches, it doesn’t get much better than that.

Time After Time is available to stream now on HBO Max.

More like this
Culture
8.9.2022 11:30 AM
You need to watch the grittiest alien invasion movie on Netflix ASAP
By David Grossman
Culture
7.29.2022 11:30 AM
You need to watch Christopher Nolan’s weirdest sci-fi thriller before it leaves HBO Max this week
By Alex Welch
Culture
8.3.2022 9:00 AM
7 amazing sci-fi shows and movies coming to HBO Max in August 2022
By Robin Bea
Related Tags
Share: