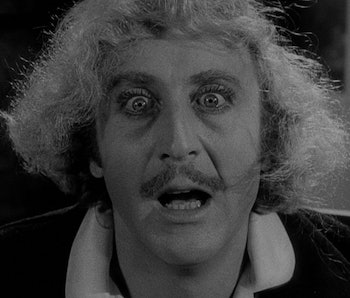 James Whale’s adaptation of Mary Shelley’s Frankenstein is one of the most iconic films of all time.

This 1931 black-and-white screen classic is iconic not only for the central performance by Boris Karloff as the story’s infamous monster, but also for its stunning, theatrical visual style and playful, gothic mood. That Whale went on several years later to make a sequel just as iconic and beloved in 1935’s Bride of Frankenstein is a testament to his skill as a filmmaker — and his enduring influence on those who followed in his footsteps.

All of this is to say that Whale’s interpretation of the monster movie can’t be replicated. You’d have to be mad and exceptionally well-paid to even try to recapture Frankenstein’s magic. Or you could be Mel Brooks.

One of the greatest comedic minds in cinema history, Brooks offered a subversive comedic take on Whale’s 1931 and 1935 gothic masterpieces 40 years later — in the form of Young Frankenstein.

A classic in its own right, this laugh-a-minute masterpiece from 1974 is one of the greatest comedies ever made, and, thankfully, is available to stream now on Amazon Prime. Here’s why you need to carve out some time for it ASAP.

You already know the plot of Young Frankenstein. The film follows the same basic plot beats as those films that inspired it and features many of the same characters. Even visually, it rips off and replicates some of the sequences from its predecessors. But that’s okay.

The joys of Young Frankenstein don’t come from its story, but from the way that it hilariously twists, subverts, and winks at the films it’s paying homage to. As only Brooks could accomplish, the film is simultaneously a parody of the Hollywood monster movies of the 1930s and ‘40s and a massive love letter to them.

That is particularly clear through the film’s visual style. Not only does Young Frankenstein replicate the monochromatic color palettes of the films that came before it, but Brooks — who directed and co-wrote — brings the same level of visual flair and theatricality one would expect from a filmmaker paying tribute to Whale. He leans into the film’s gothic iconography and characters in a way that celebrates the aesthetic rather than mocking it — trusting in his actors and screenplay to bring the necessary laughs.

And bring it they do.

Indeed, Young Frankenstein features some of the greatest comedic performances ever put to film, including turns by Gene Wilder as Dr. Frederick Frankenstein (make sure you say it right!), Peter Boyle as The Monster, and Madeline Kahn as Elizabeth. Together, the film’s cast ensures that Young Frankenstein’s observational, tongue-in-cheek script truly sings.

Wilder and Boyle’s third act performance of “Puttin’ on the Ritz,” in particular, never fails to make this writer laugh, and that’s just one of many, many set pieces in Young Frankenstein capable of eliciting that kind of reaction. It’s one of the funniest movies ever made. The fact that it’s also a loving and accomplished tribute to some of the most iconic films from Hollywood’s golden age is just the cherry on top of its proverbial, Abby Normal cake.

Young Frankenstein is available to stream now on Amazon Prime.