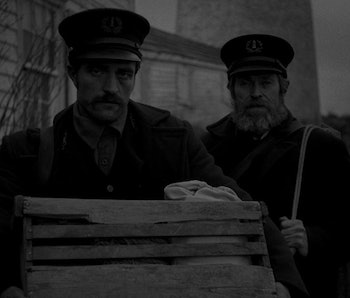 On the surface, Robert Eggers’ 2019 film The Lighthouse is an intimate movie with a simple premise: Robert Pattinson and Willem Dafoe work at a lighthouse in the 1800s. The two spend the movie either talking to each other, working together, or chasing each other. But as the story unravels, the viewer suddenly realizes that they don’t know either character — and the characters know even less. The only thing that remains knowable is the lighthouse, which is as scary as it is compelling.

The set-up of The Lighthouse is simple: Pattinson’s Ephraim Winslow gets a job at a lighthouse in the late 19th century, essentially the second-in-command to Willam Defoe’s Thomas Wake. Wake is a demanding taskmaster, forcing Winslow to take on task after task, but the two still dine together every night.

Initially, The Lighthouse was supposed to be based on an unfinished Edgar Allen Poe story, which sounds spooky enough. But the project stalled and Eggers (The Witch) took it on, losing the Poe-focused parts of the story in favor of an obscure historical moment, an 1801 incident off the shores of Wales referred to as the Smalls Lighthouse Tragedy.

The Smalls Lighthouse Tragedy featured two men who hated each other and manned a lighthouse together in isolation. One died. The other, horrified that he would be blamed for his death, attempted to build a coffin that was torn apart by strong storms. Eventually, he settled on living with a dead body for weeks.

It’s a terrifying story, and one that was turned into a faithful adaptation in 2016 (also called The Lighthouse). But for Eggers, history is more of a jumping-off point to force Pattinson and Defoe against each other over and over again.

Any movie that only features two characters relies heavily on their chemistry, which this pair has in abundance. The two display a relationship of complete hatred and complete love for each other, turning time and again on a dime between the two extremes.

During interviews for the movie, Eggers encouraged viewers to “forget about complexities of human sexuality or their particular inclinations” but also stated that queer undertones were “always there.” Pattinson followed up by saying that the queer relationship between the two men “was pretty explicit in the script.”

On the verge of love and hate for each other, becoming consumed in their own fantasies, the two are lucky to have their language elevated by Eggers. The script for The Lighthouse is practically a character on its own, leaving the viewer eager to see if the next rambling and somewhat threatening monologue given by one character will be one-upped by the rambling and somewhat threatening monologue that follows it. Luckily enough, it always is.

The actors joined the project for different reasons. Dafoe was inspired by The Witch, Eggers’ first movie, wanted to delve deep into a historical project, and reached out to the director saying he wanted to work together. Pattinson also saw The Witch, but turned down roles from Eggers for years, eventually telling the director he wanted something “really, really weird.”

Both got exactly what they wanted. The Lighthouse is one of the most stunning movies of the past decade with a disturbing sci-fi finale straight out of H.P. Lovecraft. Hopefully. it will challenge anyone who watches it to make sense of what is happening on screen.

The Lighthouse is available to watch for free with Amazon Prime in the U.S.

More like this
Culture
8.12.2022 11:30 AM
You need to watch the most awe-inspiring sci-fi epic on HBO Max ASAP
By David Grossman
Science
11 hours ago
The wildest sci-fi thriller on Amazon Prime reveals a real-life threat
By Tara Yarlagadda
Culture
8.6.2022 11:30 AM
20 years ago, Robert Rodriguez made the strangest sci-fi sequel of the early 2000s
By Jon Negroni
Related Tags
Share: