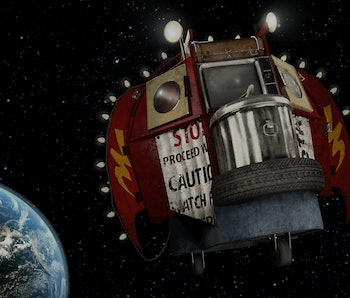 Most kids dream of exploring, and those pre-adolescent feelings of wanderlust have given us some of the greatest science fiction and fantasy stories of all time. From classics like The Goonies, E.T., and The Last Starfighter to Disney’s underrated animated adventure Treasure Planet, movies let us rediscover the joy of being a kid on an adventure.

But few sci-fi epics handle that desire more playfully or whimsically than Explorers. Directed by Joe Dante, this 1985 sci-fi flick is one of the most underrated family-friendly genre films of the ‘80s. Fortunately, Explorers film has taken on cult classic status in the decades following its botched theatrical release.

Explorers is available to stream now on Amazon Prime, but before you get out the popcorn, here’s what you need to know about this classic science fiction movie.

Set in a fictional Maryland suburb, Explorers follows Ben Crandall (Ethan Hawke), a young boy who has been experiencing strange dreams where he soars over cities and landscapes that — from above — look a whole lot like circuit boards. Falling asleep to the sounds of classic sci-fi movies playing from his bedroom TV, Ben begins to think that the things he’s seeing in his sleep may be more than just dreams. It doesn’t take long for him to be proven right.

With the help of his two friends, Wolfgang Müller (River Phoenix) and Darren Woods (Jason Presson), Ben uses the circuit designs from his dreams to create a microchip that allows the three of them to travel over great distances and speeds. Using an abandoned Tilt-A-Whirl car as the body, the three friends assemble a spaceship named “The Thunder Road” (after the Bruce Springsteen song of the same name) and set off to explore the stars.

The adventures that follow are as playful and whimsical as they are childish. They’re also a little weird. No spoilers, but we’ll just say that in the hands of any other director, the narrative leaps that Explorers takes in its second half might have proven to be too much for the film to handle.

But Joe Dante is more capable of blending childlike whimsy with weird and wild sci-fi concepts than perhaps any other filmmaker. Just as he did in Gremlins, Matinee, Innerspace, and Small Soldiers, Dante perfectly rides the line between earnest cheesiness and self-aware humor in Explorers.

The humor of Explorers especially shines through in its eccentric and utterly ludicrous third act, which sees the film’s central group of friends come face-to-face with the source of Ben’s fantastical dreams. It’s the moment in which the film fully embraces the zanier side of science fiction and it’s a part of Explorers that’s just as divisive today as it was back in 1985.

But for as weird and wild as the final act is, Dante and co. also manage to successfully stop it from overwhelming everything that came before. The most impressive thing about Explorers is that it somehow manages to tie even its strangest moments into its overarching love of classic sci-fi movies.

That’s because, in the end, Explorers is as much a film about the power of children’s dreams as it is a love letter to the fantasy and sci-fi tales that came before it — and it’s a whole lot of fun to watch.

Explorers is available to stream now on Amazon Prime.