“Isn’t it easier to go forward when you know you can’t go back?” 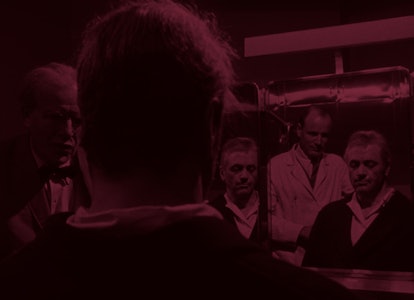 No matter where you go or what you do, you can never outrun yourself. That’s the lesson learned the hard way by middle-aged banker Arthur Hamilton (John Randolph) in John Frankenheimer’s 1966 paranoid sci-fi thriller.

Arthur lives a comfortable life that looks like something out of a ‘60s sitcom. He’s a mid-level executive in line for a promotion, commuting into the city every day from his large suburban home that he shares with his wife.

But underneath it all, he’s deeply dissatisfied and completely alienated from everything theoretically good in his life. He and his wife sleep in separate beds. His grown daughter lives thousands of miles away and barely ever calls. His job provides him no fulfillment. He doesn’t even have any friends.

In Frankenheimer’s Seconds, Arthur gets a chance to start over, only to find that he’s still Arthur Hamilton, even if that’s no longer his name.

Arthur is drawn into the shady world of an organization known only as the Company, when he gets a phone call from a man claiming to be one of his only friends — a man he thought was dead. Arthur’s old buddy tells him about a process offering a new lease on life, at the simple cost of faking his death and walking away from his tired old life.

After accepting the offer, Arthur meets a shady operative who directs him to a cramped dry cleaners and then to a meat-packing plant where he’s blindfolded and taken to the actual Company headquarters. Frankenheimer and screenwriter Lewis John Carlino (working from David Ely’s novel) keep Arthur’s purpose shrouded in mystery at first, and the early scenes of Seconds could be the lead-up to a political thriller like Frankenheimer’s The Manchurian Candidate or Seven Days in May.

It’s only when Arthur finally arrives at the Company’s headquarters, a labyrinthine office straight out of a dystopian nightmare, that the movie reveals what he’s actually been pursuing.

Or maybe it’s the Company that’s pursuing Arthur. He’s far from convinced when he arrives at the office. He’s not even entirely clear what they’re offering him.

But once Arthur steps into their realm, he’s trapped. The company creates blackmail material against him by drugging his tea and filming him in compromising positions with a young woman.

The bureaucrat who pushes him to literally sign his life away frames the decision as the pathway to happiness, but it’s just another kind of existential prison, dictated by forces beyond his control.

“Isn’t it easier to go forward when you know you can’t go back?” asks the bespectacled, bow tie-wearing head of the Company. His folksy demeanor makes the question sound more like a threat.

Frankenheimer and cinematographer James Wong Howe use uncomfortable close-ups and off-kilter angles to emphasize the overwhelming situation Arthur finds himself in. When he gives in and agrees to the procedure, it doesn’t come off as an exciting new start. It seems like a kind of death.

And yet, there’s still a bit of a thrill when he wakes up after the Company’s revolutionary process (documented in excruciating detail, including with some real-life surgical footage) to see himself wearing the face of Rock Hudson. Hudson was 40 at the time, only 11 years younger than Randolph, but he still looks like a vibrant matinee idol. The renamed Tony Wilson undergoes physical training and psychological counseling. He’s given a new identity as a swinging bachelor, an artist living in the hip enclave of Malibu, California.

While Randolph plays the character with resigned weariness, Hudson embodies more complex emotions. As Tony, he’s torn between the potential allure of his new life (which includes a fetching neighbor played by Salome Jens who practically throws herself at him) and grief for what he’s left behind. Just because he looks younger doesn’t mean that Tony actually is younger, and the second half of the movie plays like a referendum on the youth counterculture of the time.

Jens’ Nora drags the supposedly bohemian Tony to hippie gatherings where he feels as out of place as, well, an old man. Frankenheimer and Howe stage a freewheeling hippie party in Santa Barbara like something out of a horror movie, shooting from vertiginous angles as Tony is overwhelmed by the sight of naked flesh and free love. The nude revelers throw themselves into vats of grapes to stomp on for winemaking, and when Tony finally joins them, he looks more like a hostage than a willing participant.

Tony’s ostensibly liberated new life only becomes more of a cage, as the Company monitors his every move, and his paranoia turns out to be entirely justified. Hudson brings pathos to Tony’s increasing desperation, as he longs to escape his “reborn” existence with far greater urgency than he ever resented his previous dull life. It’s hard not to think of Hudson’s own life as a closeted gay man when watching Tony struggle with expressing his true identity to the people around him.

The filmmakers commit to the harsh bargain that Arthur made, and Seconds grows darker as Tony further challenges his benefactors/captors. This isn’t It’s a Wonderful Life, with a smiling protagonist returning to the life he left behind, newly appreciative of everything he took for granted. Arthur has made a deal with a calculating, evil cabal, and he has to accept the consequences, through to the bitter end.

Seconds is streaming for free on Kanopy in the U.S.