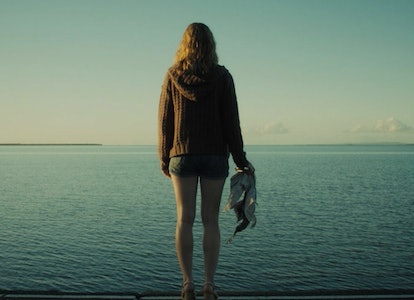 Jess doesn’t get to wake up with the chance to live the same day anew, discovering the secret to appreciating life. She’s stuck in a constant cycle of violence without any respite, as soon as she heads out on an ill-fated sailing trip with a group of friends.

Smith establishes a sense of unease and dread from the beginning as a clearly distraught Jess rushes around her house, getting ready for the trip and tending to her young autistic son Tommy (Joshua McIvor). Quickly, things get weird.

The doorbell rings, but nobody’s outside. Jess finds Tommy’s toy boat half-sunk in the kiddie pool. Driving to the marina, she passes a sign that reads “Goodbye Please Return.” As she greets her friend Greg (Michael Dorman) and his sailing companions, Jess doesn’t seem excited for a fun day on the water. Greg’s deckhand Victor (Liam Hemsworth) senses something’s off when she seemingly can’t remember where she left her son.

Jess is the odd one out in Greg’s friend group, possible strange phenomena aside. She’s a waitress at the diner that Greg frequents, and she doesn’t fit in with this upper-class crowd. She’s not the type of person who owns a yacht.

Greg’s friends Downey (Henry Nixon) and Sally (Rachel Carpani) bring along someone to set him up with, in part because they seem appalled at the idea that he could end up dating Jess. Smith establishes this interpersonal tension with just a few hostile glances and condescending remarks, some at the expense of Jess’ parenting and her son’s disability.

Everyone soon has more pressing concerns when the boat encounters a freak storm and capsizes, with Greg’s potential blind date Heather (Emma Lung) thrown overboard and presumed drowned. A large ship looms on the horizon, offering potential rescue, but when the survivors board it, they find it abandoned.

The ghost ship is a familiar presence in horror movies, and Smith initially plays up the idea that this vessel may be haunted, especially in the ways he references Stanley Kubrick’s The Shining. The characters come across a vintage photo of the same ship from 1932, and they stumble into an old-fashioned ballroom with a full buffet spread. Later, when Greg and Jess hear running water from one of the cabins, they walk into room 237 to discover a message scrawled in blood on the mirror. Jess returns to the ballroom to find all the food rotten.

But the mysterious masked figure who starts attacking the characters isn’t a ghost, and the twist of that assailant’s identity isn’t difficult to figure out, especially once Jess survives the attack only to look over the side of the ship and see Greg’s capsized yacht, with herself and her companions onboard, waiting to be rescued.

Time has looped around, but Jess is still present, both a witness to and a participant in the same cycle of violence. She’s motivated by maternal instinct, determined to return to her son at whatever cost. That cost is the same in every iteration, but Jess’ understanding of it changes as she finds messages she left for herself and various discarded artifacts (some horrifically gruesome) that point to the loop having repeated itself dozens of times.

“I feel like I know this place,” Jess says to Greg as they explore the ship for the first (or perhaps hundredth) time. As Triangle goes on, it starts to feel like the ship may be the manifestation of Jess’ tortured psyche.

Smith fills the movie with mirrors and reflections, sometimes simply doubling the characters, sometimes fracturing them into multiple distorted pieces. George gives Jess a dazed, haunted demeanor throughout the movie, always one step behind her own future/past actions. It’s only in the movie’s final moments that it becomes clear the level of guilt and shame that she’s carrying, that she brings with her on the trip.

Triangle is a journey into Jess’ troubled mind, but it’s also an intricately constructed science fiction story, the kind of movie that can inspire multiple viewings and one of those meticulous charts attempting to untangle the timeline. Movies with that kind of structure can become emotionally detached, more like math problems than narratives, but Smith maintains the grounding in Jess’s mental state even as he carefully deploys puzzle pieces that will pay off later.

It’s satisfying to see an early moment come back around in another context as the loop repeats, but what makes Triangle stand out is that those moments also take on new emotional resonance each time they return.

Triangle is free to watch in the U.S. on IMDb TV, Vudu, Tubi, YouTube, and Pluto TV.

More like this
Culture
8.12.2022 11:30 AM
You need to watch the most awe-inspiring sci-fi epic on HBO Max ASAP
By David Grossman
Entertainment
8.6.2022 3:00 PM
'Nope' editor Nick Monsour reveals the secrets behind Jordan Peele’s sci-fi monster
By Jeff Spry
Culture
8.6.2022 11:30 AM
20 years ago, Robert Rodriguez made the strangest sci-fi sequel of the early 2000s
By Jon Negroni
Related Tags
Share: