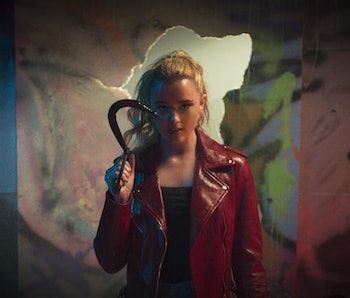 Master horror producers Jason Blum and James Wan are making a monster of their own.

On November 16, The New York Times published interviews with Blum, the prolific horror producer, and Wan, the director and screenwriter responsible for a slew of hits, about an impending merger of their companies: Blum’s Blumhouse and Wan’s Atomic Monster.

The companies have shaped mainstream and indie horror cinema over the last 20 years, and a merger could further decide the genre's future. While the outcomes of the Blumhouse-Atomic Monster merger aren’t immediately apparent, it could be a moment fans will look back on as a turning point.

Blum and Wan didn’t give details to the Times, but other outlets like Deadline and The Hollywood Reporter report that the production companies will operate autonomously while entering agreements as a single entity. After the merger, it’s expected that Atomic Monster will piggyback onto Blumhouse’s first-look deal with Universal Pictures, set to expire in Summer 2024. Atomic Monster’s previous deal with Warner Bros. ended earlier this year.

In their chat with the Times, Wan and Blum say their contrasting skills will make their partnership potent. “James is probably 70 to 80 percent artist and 30 to 20 percent business person, and I am the reverse,” Blum said. “I don’t have one idea to turn into a horror movie ... Not one. I built a business by recognizing great ideas from other people.”

While mergers can mean job losses and shrinking media ownership, the particulars of this merger might mean good things for horror fans.

There are few bigger names in horror than Blum and Wan. Yes, even Blumhouse and Atomic Monster have their share of misses: Blumhouse’s recent Stephen King adaptation, Firestarter, couldn’t light dry tinder, and Atomic Monster’s TV projects like Archive 81 and I Know What You Did Last Summer were both canceled after one season.

But horror is still one of the most reliable genres at the box office, and these are the genre’s most reliable creators. In addition to directing hits like Saw and Insidious, Wan is one of the chief architects behind the juggernaut Conjuring franchise, which boasts a total gross of $2.1 billion. Atomic Monster has produced sequels in that franchise, as well as 2021’s Mortal Kombat and Malignant. Next year’s Aquaman and the Lost Kingdom will also fall under its purview, as will a new adaptation of Stephen King’s 1975 novel Salem’s Lot.

Since its founding in 2000, Blumhouse has cemented itself as a powerhouse, with franchises like The Purge, Paranormal Activity, Happy Death Day, and the recent Halloween sequel trilogy. It also has standalone hits like Split, Truth or Dare, and The Invisible Man. Some of Blumhouse’s biggest hits, like the original Paranormal Activity and Get Out, proved that low-budget horror with a killer hook can result in stunning financial windfalls.

The upcoming sci-fi horror M3GAN, set to open in January 2023, is a collaboration between Blum and Wan. Its viral notoriety, prominent enough that it’s already encouraged talks of a sequel, is perhaps a preview of what can happen when the two combine their strengths. Horror has no shortage of new ideas, but Wan and Blum could usher in a proper renaissance that the genre hasn’t seen in a while.

Horror has survived trends and launched superstar careers, and its nature as a communal space to scream and holler fosters cinema’s most essential appeal in a way few other genres do. It’s little wonder it continues to make money while dramas, comedies, and family films are being kept afloat on the streaming life raft. As another major moneymaker—superhero movies—starts to feel directionless, horror could take a big step forward.

The partnership between Wan and Blum also arrives as the two are revealing their ambitions to enter other mediums; the ink is freshly dry on a deal between Universal and Meta, which will undoubtedly be a boon. But the producers have shown commitment to movies as an art form and an attraction of its own. What they’ll create as mad geniuses in the same laboratory could be chilling — and thrilling.