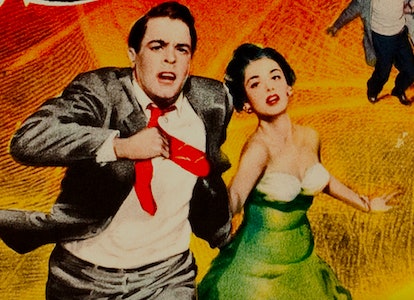 A psychiatrist is called late at night to a nearby hospital. He’s there to see a man in a dirty suit, picked up by the authorities for screaming his head off in the street.

Still screaming by the time the doctor arrives, the man warns of a threat he believes is capable of destroying all of humanity. At first glance, it’d be easy to write him off as nothing more than a total loon.

But he’s not crazy. In fact, he might be the only sane man left on Earth.

Such is the basic premise of 1956’s Invasion of the Body Snatchers, a film so influential you can still measure its impact on contemporary sci-fi films like Edgar Wright’s The World’s End. It’s also a must-see sci-fi classic that, thankfully, is now available to stream on Amazon Prime. Here’s what you need to know before diving into this alien invasion masterpiece.

Based on a 1954 novel by Jack Finney, Invasion of the Body Snatchers follows a small-town doctor (played by Kevin McCarthy), who returns to Santa Mira, California from a business trip, only to discover an increasing number of odd things happening in town. After rushing back due to urgent demand, he finds that all the people who’d requested appointments with him have since canceled. To make matters even stranger, certain members of the community, including a terrified little boy, are claiming that some of their family members have been replaced with identical impostors.

Things only get weirder, and worse, from there. Lifeless duplicates of different citizens begin to show up in their houses, backyards, and basements, while an increasing number of strange seed pods are seen sprouting up throughout the town. Thanks to the film’s title, it’s clear where things are heading, but that doesn’t make watching Invasion of the Body Snatchers any less engrossing.

Indeed, the film utilizes paranoia in a way that feels strikingly similar to many future sci-fi classics, like John Carpenter’s The Thing and even The Stepford Wives. As McCarthy’s unsuspecting doctor grows increasingly suspicious, the film’s picturesque, all-American town begins to feel properly nightmarish.

The success of Invasion of the Body Snatchers can largely be attributed to what Don Siegel brought to it as a director. Siegel’s primarily known nowadays for his famous creative partnership with Clint Eastwood, which resulted in films like Dirty Harry, Escape from Alcatraz, and The Beguiled. His prowess as a filmmaker is on full display in Invasion of the Body Snatchers.

The director borrows heavily from the film noir playbook, incorporating elements of extreme cynicism and paranoia while employing voice-over narration that feels like classic noir. Siegel doesn’t over-stylize the film, instead choosing his moments of visual disruption carefully. That’s especially clear in how and when he employs Dutch angles throughout the film, turning the camera to an off-kilter angle only when it can serve to further punctuate moments of confusion and horror. That technique is used particularly effectively in the film’s iconic greenhouse sequence.

The result is a disorienting and engrossing cinematic experience that’s hard to forget, as evidenced by Invasion of the Body Snatchers’ enduring legacy and reputation. It’s one of the most influential sci-fi horror films ever made, and its unique take on the traditional alien invasion narrative continues to be replicated by filmmakers to this day.

Invasion of the Body Snatchers is available to stream now on Amazon Prime.