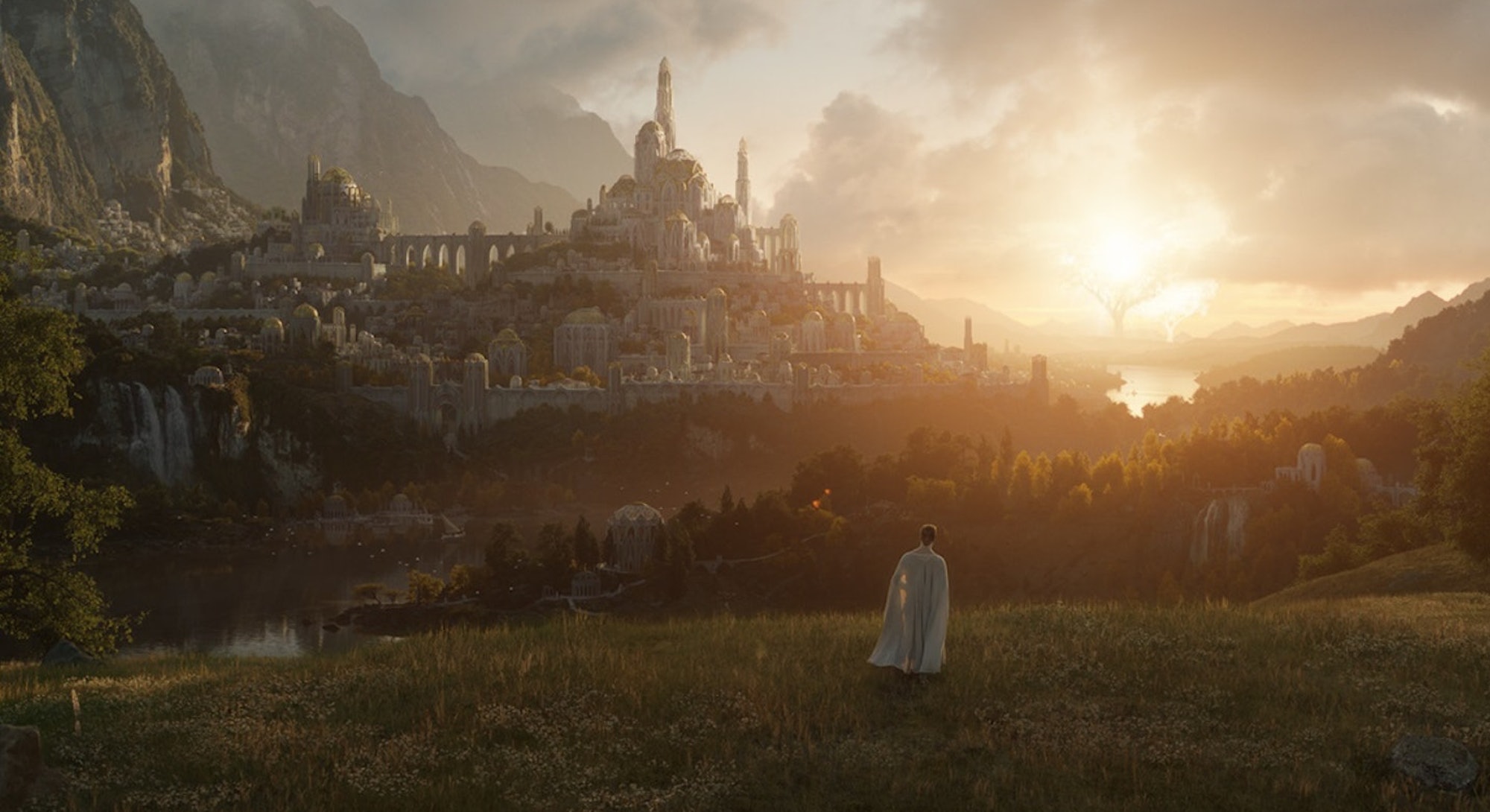 Even among diehard Lord of the Rings obsessives, Leith McPherson is a special kind of fan.

“Every moment I can, I go back to my favorite place, the appendices of The Lord of the Rings,” McPherson tells Inverse. “The appendices feel like Tolkien is speaking to me, directly.”

McPherson brings up Appendix E, where the author unpacks Elvish and “lays down the phonetic description of the sounds.” “That’s my template. That’s my touchstone. That’s my home,” she says. “I try to be an ambassador for his work as much as I can.”

“Tolkien was terraforming with language.”

A decade ago, the UK-born, Australia-based dialect coach worked with the actors of Peter Jackson’s Hobbit trilogy, teaching them both the fictional languages of J.R.R. Tolkien’s Middle-earth — namely Elvish, Dwarvish, and Orcish — and unearthing accents for characters who speak the “common” (English) tongue.

Now McPherson has reembarked on her unexpected journey. She’s once again the on-set dialect coach, this time for Amazon’s upcoming prequel series The Lord of the Rings: The Rings of Power. With the sun rising from her apartment window in Sydney, McPherson lectures me on her expertise — for example, she details the intricacies of Quenya, a “dialect” of elves that is like “Elvish Latin” in the Third Age but commonplace in the Second Age, when The Rings of Power takes place.

“You can, as many do, spend your entire scholastic and professional life focusing on one form of Elvish,” McPherson tells Inverse. “It has potency and power. It’s spoken with care.”

In her words, Elvish is beautiful and lyrical, Quenya in particular, as the elves use it for spellcasting. It stands in contrast with Orcish, which McPherson describes as an “affront” to the listener. “It should feel awful to speak and to hear,” she says. “It’s guttural. It’s harsh. It’s full of rough consonants. All language is a physical act upon the listener. Elvish is a beautiful experience. Orcish is awful.”

The dwarf language of Dwarvish, meanwhile, strikes a balance of both with a uniquely hearty quality. “These are people connected to the Earth, to stone in particular. It evokes their very solid present. It’s beautiful but there is a rougher quality, a feeling of weight.”

Such attention to detail for imagined things is how J.R.R. Tolkien forged his famous saga. It’s also apt to describe McPherson’s work behind the scenes for the buzzy Amazon series.

True to The Rings of Power’s promise of adventure in a story set across all corners of the Second Age (thousands of years before Bilbo ventured outside the Shire), McPherson is similarly a pathfinder, eking out the farthest reaches of Tolkien’s imagination. She’s doing it not with her eyes, but with her ears.

“You want the sense we are taking the audience on a journey,” McPherson tells Inverse. “We have extraordinary artists placing you in a different world each time we move between cultures. We want that individuality acoustically, too. Hundreds are focused on the visual [elements], but here is this little team focused on making the auditory experience rich and varied, a kind of signpost as we move from place to place.”

“There are pathways, descriptions for sounds Tolkien set. We are honoring his work.”

Trained as a singer, McPherson honed her skills over 12 years in London theater. She “stumbled into Middle-earth” through the Hobbit films after writing a letter advertising her skills to the production staff, who were in need of dialect coaches. Now, for The Rings of Power, McPherson isn’t simply recycling her work. Given its place in the timeline and the corners of Middle-earth audiences will see for the first time, languages play a key role in the broader theme of discovery.

This meant McPherson had to do some discovery herself. “There are pathways, descriptions for sounds Tolkien set. We are honoring his work,” she says. “We’re not venturing so far off the map that Tolkien himself hasn’t given scope for it. At the same time, we have flexibility to create, to be creative with the aural.”

McPherson’s job is primarily coaching the show’s actors into inhabiting the voices of their characters, be it a new accent or learning lines in Dwarvish. That’s easier said than done when these same actors have a realm to save. “Everybody had that moment of, ‘I have to throw a knife or fire an arrow, or some extraordinary stunt, and I have to be fluent in Elvish?’”

She describes her work like being a music teacher. “You’re helping people find the notes. You are trying to train the ear and mouth to embody sounds it hasn’t done before,” she says. “It’s a very individual process.”

But McPherson’s job also has attributes of an archaeologist and an anthropologist. In concert with the Tolkien estate, she is preserving what Tolkien left behind and building upon what he didn’t. After all, this is the Second Age. Like the rest of The Rings of Power, McPherson had to imagine how Middle-earth sounded a thousand years prior to Peter Jackson’s movies.

“This is a different landscape. Cultures have changed, some not very much. Some of which are completely new,” she says.

Tolkien didn’t make it easy, she adds. “Tolkien never really opened all of the doors and cupboards in the house. He himself, dare I say, was inconsistent. He would revise a word, it would have a meaning here and have a different meaning there. Even the most developed forms of his work are not complete. It eludes in ways. I was talking about this with the showrunners at one point, it’s like Tolkien was terraforming with language.”

“This is a different landscape. Cultures have changed.”

But what The Rings of Power has “discovered” through McPherson’s work is plenty revealing on the power of language in Tolkien’s world. Unlike our real world where dialects and accents tend to form around regions, here it is dictated by culture.

“Your language and your use of language is a form of cultural identification, not regional,” McPherson says. “That has power when, for example, a human speaks Elvish, or an elf speaks in Quenya. You are connecting as you do when you code switch and speak with somebody in their dialect. That sense of cultural connection and validation. That kind of thing has power.”

In the first of five planned seasons for The Rings of Power, the show makes heavy use of Elvish, Dwarvish, and Orcish, in addition to English flavored with British and Irish palettes. However, foreign dubs of the show will not feature any of the fantasy languages; only the native “English” track of the show will allow viewers to hear the acoustics of Tolkien.

But even the English in The Rings of Power won’t have accents familiar to audiences. While the use of English is a choice for accessibility, McPherson and the team are also striving to “make sure an accent doesn’t take [audiences] to their nana’s down the road.” For example: The Harfoots, ancestors to the Hobbits, appear in The Rings of Power with “an Irish base to their accent,” but they do not speak as though they’ve walked out of a “particular cross street in Dublin.”

“It’s familiar, but different,” she says. “It’s not like an entirely new dialect never heard on Earth before, but it is intended to have an otherness.”

“It’s hugely important because that was his greatest passion.”

Much like how The Rings of Power is expanding Tolkien’s worlds like never before, so is McPherson widening the auditory universe of literature’s greatest fantasy epic. Tolkien started his work on The Lord of the Rings with language, after all. So it’s critical for The Rings of Power to have someone like McPherson guiding the way.

“It’s hugely important because that was his greatest passion,” waxes McPherson on Tolkien’s languages. “I started writing on the top of my call sheets [for The Hobbit] years ago, ‘The languages came first.’ He created the languages and then the world to put them in. Even in The Silmarillion, he talks about the fact the world was created through song. Song came first.”

As for McPherson, The Rings of Power is like finding a new world in her own home.

“It’s coming home to landscapes we haven’t explored before,” she says. “We’re on parts of the map we’ve never seen that Tolkien himself presents as an interpreter. His traveler didn’t necessarily go to all these places. For us to be in undiscovered country is a thrill for anyone who has a sense of exploration in them.”

And perhaps if we’re lucky, The Rings of Power will reveal the greatest mystery in Tolkien’s saga: how orcs know about restaurant menus. (“Looks like meat’s back on the menu, boys!”)

With a laugh, McPherson says: “​​As I said, there are parts of this world we are yet to explore. There are caverns deep, way below these soaring mountains. Who knows what’s down there? And what their dress code might be?”

The Lord of the Rings: The Rings of Power premieres Sept. 2 on Amazon Prime Video.