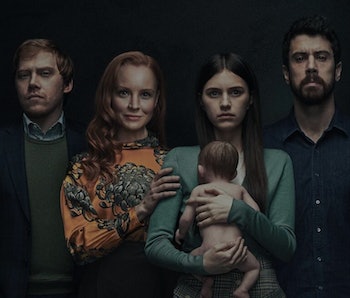 This article about Season 1 of the drama Servant was originally published on March 25, 2019 and updated on May 4, 2021 following the release of the season on Apple TV+. Read on for the original article, with some new changes to reflect the latest updates on this topic.

One of the world’s biggest tech giants is banking on a master of suspense. M. Night Shyamalan, best known for thrillers like The Sixth Sense, Signs, and his Unbreakable superhero trilogy, is working on a new original series for Apple and its forthcoming streaming service Apple TV+.

Here’s everything we know so far about Servant, Shyamalan’s newest series. Admittedly, we know very little as of now. But bookmark this page and check back frequently as we’ll include more details, including first-look preview images and trailers when they’re made available.

When was Servant announced?

The Hollywood Reporter first reported Shyamalan was working on a new, original ten-episode “psychological thriller” for Apple back in February 2019.

When was the Servant Season 1 release date?

Servant Season 1 premiered on November 28, 2019, on Apple TV+. It dropped its first three episodes all at once, airing the remaining episodes of Season 1 weekly.

Is there a trailer for Servant Season 1?

Yes! Apple TV dropped a trailer for Servant Season 1 in early November, a few weeks before the series premiered.

What is the plot of Servant Season 1?

A wealthy Philadelphia couple Dorothy (Lauren Ambrose) and Sean (Toby Kebbell) Turner experience a fracture in their marriage after the death of their thirteen-week-old son, Jericho. The couple undergoes transitory object therapy using a lifelike reborn doll after Dorothy experiences a full psychotic break. The doll, which Dorothy believes is her real child, was the only thing that brought her out of a catatonic state following Jericho's death. Six weeks after the death they hire a young nanny, Leanne (Nell Tiger Free), to move in and take care of Jericho, the reborn doll, opening their home to a "mysterious force".

Who was in the cast of Servant Season 1?

Who else is working on Servant Season 1?

Blinding Edge Pictures are producing the series. Some of the show’s executive staff include Taylor Lathan (LOL), Ashin Wajan (Split), producer Jason Blumenthal (The Equalizer), Todd Black, and Steve Tisch. Black is an Oscar nominee for the 2016 film Fences, while Tisch won an Oscar for Forrest Gump.

Tony Basgallop, a BAFTA-nominated director, wrote the series with Shyamalan and directed the series’ first episode.

Servant is not Shyamalan’s first foray into television. In 2015, Shyamalan co-produced Wayward Pines, a live-action adaptation of the horror/mystery novels written by Blake Crouch. He also directed the show’s first episode, which critics called “a return to form” for Shyamalan.

Was Servant renewed for Season 2?

Yes! Ahead of its Season 1 premiere, Apple renewed Servant for a second season on November 22, 2019. The season premiered on January 15, 2021, and prompted yet another renewal from the company.

This article was originally published on March 25, 2019