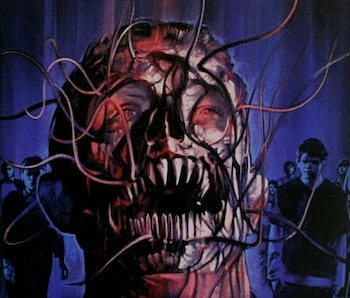 “Think your teachers are aliens? You could be right.” “The students of Herrington High always suspected their teachers were from another planet.” A bit puzzling, I thought, as I had never heard any high school student (as an adult or as a student) refer to their teachers, as “aliens.” Jerks, yes, but never extraterrestrials.

These are just a few of the promotional taglines for the cult classic 1998 sci-fi thriller, The Faculty, starring Elijah Wood, Josh Hartnett, Clea DuVall, Jordana Brewster, and Usher. (And that’s just who’s paying the students.) Directed by Robert Rodriguez, The Faculty is an underrated gem of the horror genre. It’s streaming right now on HBO Max. Here’s why you should watch it, and what you need to know before you do.

The Faculty takes place in what is definitely a very underfunded high school in a small American town. (Props where it’s due: this does look like a typical rural American high school and not a Hollywood producer’s fantasy of high school). It seems like the average ‘90s high school until the school’s staff members start behaving... oddly.

Before long, it’s obvious these teachers have been infected (or perhaps body snatched) by alien parasites. The Faculty is essentially Invasion of the Body Snatchers meets The Thing meets The Breakfast Club. There’s an alien invasion in the works where the aliens can mimic anyone. That means no one can fully trust anyone else.

It’s up to a group of student stereotypes to stop the faculty’s nefarious plot to spread the alien infection to the student body, the town, and ultimately, the world. Our heroes are a group of ‘90s high school clichés: the geek, the jock, the popular cheerleader, the loner girl, the innocent new girl, and the local delinquent who should have graduated a long time ago.

This was my first time seeing The Faculty, and I was amazed at how many major stars were in this movie. Besides the student actors, the faculty actors include Salma Hayek, Famke Janssen, and Piper Laurie. Even Jon Stewart is in this movie. Seriously, I don’t know if I’ll ever be able to look at Jon Stewart the same way after seeing him with a slimy alien tongue and getting stabbed in the eyeball with a syringe.

The film’s characters make frequent mention of Invasion of the Body Snatchers and The Puppet Masters, but I would say the movie draws more on The Thing. Both horror flicks try to create a sense of paranoia with nobody knowing who’s still human and who’s an alien parasite in disguise. Each movie also features an alien-detection test that can identify an infected person. Heck, both movies even have a walking head with alien legs.

When I first watched The Faculty, I was laughing quite a lot. I truly thought this was supposed to be a horror-comedy, and it seems to have been received this way. But I’m not sure if this was the original intention. Based on the original trailer and the marketing (plus, Robert Rodriguez’s interview where he clearly identifies the film as sci-fi), there’s very little indication that The Faculty was meant to have a distinct comedic element.

For movies like Shaun of the Dead, the trailer alone lets you know right away that there’s going to be comedy alongside your monsters. Even Scream (a movie that The Faculty’s cast and crew thought they were drawing upon, according to a Collider interview with Jordana Brewster) uses its trailer to make it clear it’s a self-aware meta-horror comedy.

The Faculty doesn’t quite make that cut. The characters may constantly be referencing other sci-fi books and movies, like the horror nerds in Scream, but the overall tone is nowhere near as self-aware as it probably should be.

To be fair, it’s a bit harder to pull off that level of self-awareness in an alien-invasion movie. Slashers like Halloween are so clearly defined by topes and rules (from the final girl to never saying “I’ll be right back”) that it’s easy to poke fun at them because everyone instantly is in on the joke. By comparison, most alien invasion movies are different enough that you can’t just follow the same old formula.

The Faculty does seem to be trying to create that tense atmosphere in the same vein as The Thing, but the general mood is just too goofy to maintain suspense. There are a lot of silly lines that border on corny (with equally silly delivery) and eliminate that sinister element the movie appears to be going for. And unlike The Thing, the special effects are very obvious. You can easily tell that the aliens and the infected individuals are so computer-generated that they look ridiculous. This was the late ‘90s, so it was a very awkward time for special effects as film studios were transitioning more to CGI — often with laughable and mockable results (see, Steele).

The Faculty is no horror cinematic masterpiece, but it does have a certain campy appeal. It makes for a fun Halloween viewing if you want to watch something creepy and have a few laughs, but don’t like extreme gore. As someone who is a self-proclaimed weenie when it comes to certain horror movies, I can assure you that this movie is not scary enough to give you nightmares or keep you up at night (but The Thing definitely will).

The Faculty is streaming now on HBO Max.