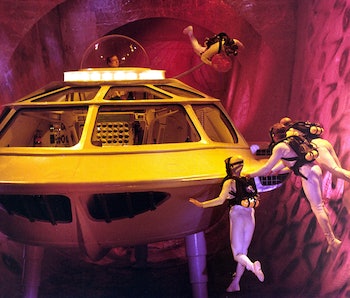 In America of the 1950s and early ‘60s, there was a wondrous optimism about the technological possibilities of the future. People truly believed that the great mysteries of the world could be conquered and that, out of the terrible atomic destruction of the era, a new world of scientific bliss would emerge.

Cultural sensations like Disneyland’s Tomorrowland fueled and played into such notions. When the attraction opened in 1955, Walt Disney declared that the themed area would offer “new frontiers in science, adventure, and ideals: the Atomic Age, the challenge of outer space, and the hope for a peaceful and unified world.”

But Disney couldn’t find enough corporate sponsors to fill Tomorrowland with futuristic technologies, so it offered up a behind-the-scenes exhibit on one of its latest movies: 20,000 Leagues Under The Sea. Attendees could learn about the modern themes Disney added to an old story, as well as garner insight into the special effects technology that went into making the picture.

11 years later, 20th Century Fox tried to capture the same sense of wonder. And if the studio couldn’t get Walt himself, it would get the next closest thing: director Richard Fleischer, who had helmed Disney’s 20,000 Leagues. For Fox, he would be back to working with giant submarines. This time, he wouldn’t be exploring any oceans. Instead, he would be taking a Fantastic Voyage.

The Fantastic Voyage story has been adapted so many times it’s easy to forget it was once an original idea. The 1966 science fiction-adventure film follows a submarine crew as they shrink to microscopic levels in order to navigate within and repair damage to the body of an injured scientist. From a modern perspective, it sounds more like the plot of an episode of The Magic School Bus or Rick and Morty than a cinematic tentpole of technical wonder. But more than 50 years ago, Fleischer managed to make a proto-blockbuster that still looks astonishing today.

The actual plot of Fantastic Voyage starts with a stylish, nearly wordless sequence. A man is severely injured in a car crash and rushed away by soldiers. The man is Dr. Jan Benes (Jean Del Val) and he’s been working on a top-secret military technology project so secret that CIA agent Charles Grant (Stephen Boyd) is pulled out of bed to save him.

Grant is ushered to a secret location, where General Alan Carter (Edmund O’Brien) briefs him. What he discovers, shocks him: both the United States and “the other side” have developed the ability to shrink down anything and anyone. Entire armies could fit in a soda bottle! The only problem is keeping things (or humans) in their shrunken form. In previous experiments, anything or anyone shrunk down would only stay that way for an hour, but Dr. Benes has figured out a way to elongate that time. The car crash — in actuality, an assassination attempt — puts that knowledge at risk.

So the military wants Grant to protect Benes while surgeons operate, right? Wrong. Grant has walked into the Combined Miniature Deterrent Forces (CMDF), and the doctors are going to shrink themselves and bring Grant along for protection. While Grant doesn’t know the first thing about the human body, he will travel within one aboard the nuclear-powered submarine Proteus, alongside Navy pilot Captain Bill Owens (William Redfield), circulatory specialist Dr. Michaels (Donald Pleasence), surgeon Dr. Peter Duval (Arthur Kennedy), and his assistant Cora Peterson (Raquel Welch in her breakthrough role).

Much of Fantastic Voyage features the Proteus crew staring in awe at the world inside of Dr. Benes. They witness the miracle of oxygenation, get lost in the powerful currents of a fistula, and gaze in wonder at the lungs. Poetry is recited, as are philosophical ruminations about the concept of man as the center of the universe. The characters are covered in a variety of bright lights furthering the sense of wonder.

Fantastic Voyage is not an educational movie. It is a spectacle. Characters will announce that they are going to explore something or other, and then viewers will follow them as they travel through a brightly colored world filled with strange, intriguing, and sometimes dangerous objects.

Grant stands in for the audience, regularly asking “What’s that?” or “Where are we?” The rest of the crew is mostly interchangeable, save for Cora, the crew’s only woman. At one moment early in the film, the military is furious that doctors would want a woman to get small. Only men should be allowed to get small! Cora is also the only character not given an undershirt.

Fantastic Voyage is an incredible technical achievement. Even if you’ve never seen it, you’ve probably seen something based on it. The reason it’s stuck around so long as a reference point is because there’s not a shred of cynicism within the entire movie. It looks at a ridiculous concept with great sincerity, including an opening title card announcing that the movie will soon be real life. While Fantastic Voyage’s ideas have lived on in the cinematic form, the initial spirit driving the movie is what makes it truly worth revisiting.

More like this
Culture
Sep. 18, 2022
You need to watch the sexiest sci-fi thriller of all time on Amazon Prime ASAP
By Andy Crump
Culture
Sep. 25, 2022
35 years ago, the most obscure sci-fi movie tried (and failed) to redefine alien cinema
By Jon O'Brien
Culture
Sep. 29, 2022
10 years ago, we got a perfect time travel movie — with one big plot hole
By Ryan Britt
Related Tags
Share: