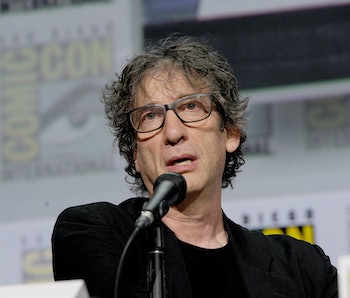 Neil Gaiman isn’t paying much attention to The Sandman’s haters. The Netflix series debuted in August 2022 and quickly climbed the streaming charts. And in case there was any doubt, the show was finally renewed for a second season in November.

But Gaiman still gets plenty of criticism for The Sandman’s diverse cast. He tells Inverse those conversations usually go something like this:

“Occasionally, we’d get people shouting at us for having made up all of these gay characters who weren’t in the comics, and then we’d go ‘Have you read the comics?’ And they’d go ‘No.’ And we’d go, ‘They were gay in the comics.’ And they’d go ‘You’re just woke and nobody is going to watch your horrible show!”

He adds, “And then we went Number 1 in the world for four weeks.”

Inverse chatted with Gaiman and executive producer Allen Heinberg about what made The Sandman’s final cut, what they weren’t able to do on Netflix, and why they haven’t let the haters get them down.

Inverse: What could you not bring from the comics into the TV series that you wish you could have?

That's the one thing that I look at, and just go, ‘I wish we could bring some of that kind of look.’ But, you can't because these are real people, and this is really being shot on film. And it’s also kind of necessary that one episode looks at least more or less like another episode.

Allan Heinberg: I think Neil’s answer is the perfect answer, but for me, it makes the books even more of an essential component of the whole Sandman experience. So if you do watch the show and you haven’t read the books, I love that the books are there for you to see this world in this glorious way that we can’t provide for you.

As a longtime DC Comics geek, part of me would have loved to have done the 1989 DC Comics continuity. I was a huge Infinity, Inc. fan, and I don't mind telling you that. But we got as many sideways nods into the DC Universe as we possibly could. And we stuck in little tributes like the care home where Unity is living is the Karen Berger Care Home, for example. So we got to play with the DCEU in that way but understood why we had to leave it behind. But it would have been fun to do more of that.

Gaiman: The truth is nothing much has been very controversial. Death’s casting (Kirby Howell-Baptise) wasn't controversial with Sandman fans, because Sandman fans know that The Endless are supposed to look like what the people looking at them think they look like.

So the people that were getting all upset that this, when you talked to them, they weren’t Sandman fans. The people that were getting all upset about Lucifer’s casting (Gwendoline Christie) and were up in arms about the ‘gender swap,’ again, weren’t Sandman fans because then they’d know that Lucifer looked kind of like an androgynous David Bowie and doesn’t have any genitalia because they’re an angel.

Other grumpy people tended to be Tom Ellis fans, who were like, ‘I love Tom Ellis! Lucifer is based on him, why didn’t you cast him?’ And honestly, he’s not. He’s a lovable rogue. He wouldn’t work in Sandman because we have to get someone that makes people scared.

And the other one was Lady Johanna Constantine (Jenna Coleman). Again, people were like, why did you gender-swap John Constantine and why did you replace him with this imaginary character that we’ve never seen in the comics before? But Sandman fans know that she was a character introduced in Sandman No. 13 in 1989 and that she goes off and has several more adventures in the Sandman storyline. So it was much more economical for us to get her and to have Jenna play her.

Those are the three most controversial castings. Oh, and occasionally, you get people shouting at us for having made up all of these gay characters who weren’t in the comics, and then we’d go ‘Have you read the comics?’ And they’d go ‘No.’ And we’d go, ‘They were gay in the comics.’ And they’d go ‘You’re just woke and nobody is going to watch your horrible show.’ And then we went Number 1 in the world for four weeks. And they went ‘It’s all bots! We hate you. You’re woke.’

Would you have cast David Bowie as Lucifer if you would have had the chance?

Gaiman: I wouldn’t have cast David Bowie as he was before he died, because the whole idea was that Lucifer is meant to look like a beautiful angel. I absolutely would have cast David Bowie if we had a time machine and a cloning device and we could have had David at any time between his 20th birthday and let’s say his 50th birthday, and I would have done the casting then. But, I suspect that David might well have been keen seeing Gwendoline play the part because he was somebody who was asked who he’d like to portray him in a biopic and his answer was Tilda Swinton. So he probably would have loved to have seen Gwendoline.

What is your favorite scene from the entire season?

Gaiman: Mine actually changes, which I find interesting. It’s not as static as one would expect. It’s moved through Episode 5 to Episode 6 to Episode 4 a couple of times. I think the last time I answered this question I said it was Stephen Fry’s final scene in Episode 10. There’s something incredibly moving and heartbreaking and just gentle, and you also realize what an astonishing actor Stephen Fry is. And you get our VFX team to do magic, and you get Tom Sturridge. The whole end of Episode 10 might be my favorite, at least right now.

Heinberg: I really love the scene at the end of Episode 8, where Dream condemns Gault (Ann Ogbomo) and vanishes Gault. And then there’s a moment between Dream and Lucienne (Vivienne Acheampong) that I really like. I think the actress that plays Gault is amazing, and Tom is incredible, and well everybody in that scene. I think we were all surprised by the power of that scene by being in the room together. Every time that I watch it makes me scared of Dream, and it makes me so admire Ann for her performance. So it’s probably that scene.

The Sandman is streaming now on Netflix.