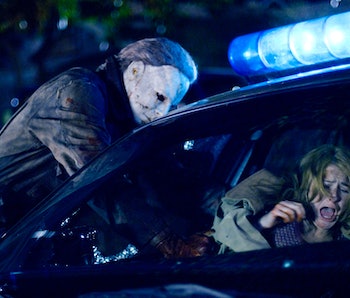 Remaking a classic movie almost never works. Just ask any of the filmmakers who directed new versions of iconic slashers during the remake boom of the late ’00s and early ’10s, when updates of movies like Friday the 13th, A Nightmare on Elm Street, and The Texas Chainsaw Massacre hit theaters. None of those movies came close to the enduring acclaim or popularity of their source material, nor did they establish any of their directors as important voices in horror.

One exception stands out, though, even if it was mostly lumped in with other remakes at the time and subjected to the same dismissal from critics and fans. In the 15 years since Rob Zombie released his updated take on John Carpenter’s 1978 classic Halloween (released on October 31, 2007), Zombie has cemented his position as a major horror filmmaker, and his movie has aged remarkably well, standing as one of the best installments in the uneven, unwieldy franchise.

A major reason Zombie’s film succeeds is that he puts a distinctive stamp on it, something most horror remake filmmakers of the time didn’t bother to do. That makes the movie itself a little lopsided since Zombie retells Carpenter’s original story alongside an extended backstory for Michael Myers. However, even when going through the beats established by Carpenter and his co-writer Debra Hill, Zombie fits them into his own sensibility, so much so that the occasional direct quote or homage from the original movie often feels out of place.

Before getting to Michael’s Halloween-night murder spree, Zombie’s film brings us to a Halloween in Haddonfield, Illinois 15 years earlier, where we spend time with 10-year-old Michael (Daeg Faerch) and his family. Nearly half the movie is devoted to Michael’s development, and Zombie humanizes him without excusing any of his deviant behavior. Michael has a volatile home life, suffering verbal abuse from his mother’s boyfriend, Ronnie (William Forsythe). He’s also bullied at school. Yet his rampage isn’t necessarily framed as revenge, though both Ronnie and the school bully seem to have it coming.

This Michael, who’s introduced wearing a version of the clown mask that the child Michael wears in Carpenter’s film, is more of a sad, almost weary figure as he gives in to his murderous impulses. After taking on his bully, Michael returns home for his older sister Judith (Hanna Hall) and her boyfriend in an almost rote manner. When he’s arrested and taken to Smith’s Grove asylum, he tells psychiatrist Dr. Samuel Loomis (Malcolm McDowell) that he has no memory of the killings. Michael continues to be affectionate with his mother Deborah (Sheri Moon Zombie) and seems to establish mutual respect with custodian Ismael (Danny Trejo).

A sense of sad inevitability and genuine anguish permeates the film, and Zombie infuses many of the acts of bloodshed with melancholy and regret. After young Michael once again gives in to his impulses and murders a nurse, Deborah can’t take the pressure anymore; her offscreen suicide is a somber, heartbreaking moment.

Years later, when the now hulking, mute adult Michael (Tyler Mane) escapes from Smith’s Grove in a bloody massacre, he doesn’t hesitate to take out Ismael on his way. “I was good to you, Mikey,” Ismael pleads. That counts for nothing.

Zombie embraces the idea, initially introduced in 1981’s Halloween II, that Laurie Strode (Scout Taylor-Compton) is Michael’s sister who was just a baby when he committed his first murders. That adds to the movie’s sense of grim fate. Laurie is living a sunny, oblivious teenage life with her adoptive parents (Pat Skipper and Dee Wallace), unaware of the dark secret of her biological family. The movie takes 50 minutes to get around to introducing teenage Laurie, but Taylor-Compton makes an immediate impression, giving Laurie a slightly nasty edge even as her friends call her “angel,” an unwitting reference to her birth name.

Parts of the movie’s second half feel dutiful, as Zombie introduces the teenagers who will become Michael’s victims while Dr. Loomis frantically tries to get anyone to believe him that Michael is headed back to Haddonfield. McDowell’s Loomis is less of a noble doomsayer here, abandoning his treatment of Michael to seek fame as an author and lecturer. He cares about Michael, but he also knows that there’s a limit to that caring — and that some people are beyond saving.

All that’s left for Michael is confusion and rage, embodied in Faerch’s expression that Zombie holds in a freeze frame as the movie transitions from young Michael to adult. Michael’s efforts at tenderness toward Laurie involve killing her friends and then kidnapping her, trapping her in the crumbling, abandoned Myers home.

Zombie carries over the grime and the classic rock of his first two movies, House of 1000 Corpses and The Devil’s Rejects, but he also incorporates the vicious cycle of family trauma, which his wife and muse Sheri Moon Zombie captures hauntingly in her portrayal of Deborah.

Michael’s killings and his treatment of Laurie are all about passing on that trauma (whether he understands it or not), and Taylor-Compton conveys how that builds over time as Laurie is tormented and then ultimately fights back. Zombie put even more of his personal stamp on his follow-up, 2009’s Halloween II, which is a brilliant exploration of PTSD and what it means to be a horror-movie final girl, and he lays all the groundwork here. It may be a remake of a John Carpenter movie, but it’s undeniably a Rob Zombie vision.