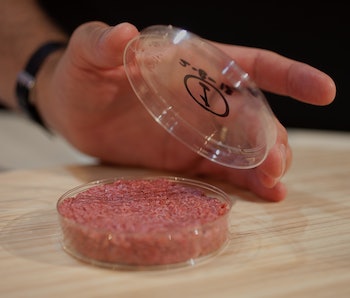 Lab-grown meat: techno-wizardry, societal savior, or an impressive imitation of the real thing? As it turns out, which of those three phrases you use to describe lab-grown meat may make a big difference as to encouraging people to actually eat it.

This is according to researchers at two universities who recently looked at how framing changes people’s perceptions of meat grown in a lab. The groundbreaking technology, which hit the headlines when Mark Post first ate a burger in 2013, could save animals and reduce the consumption of agricultural resources.

The eco-friendly meat could hit shelves by 2025. But the results suggest that cost and accessibility won’t be enough to convince people to actually eat it. The paper, “The Impact of Framing on Acceptance of Cultured Meat,” published Wednesday in the journal Frontiers in Nutrition, suggests that lab-grown meat will also have to solve its branding problems in order to enter the mainstream.

“As most people have so far heard little or nothing of cultured meat, this is a crucial time to assess how the framing of this innovation can impact consumer perceptions,” lead author Christopher Bryant of the University of Bath said in a statement.

The team spoke to 480 American adults, and pitched the cultured meat to them under three frames: “societal benefits,” “high tech,” and “same meat.” Overall, 65 percent said they were willing to try the meat, and 49 percent were willing to eat it regularly. However, those that were told about the product as being “high tech” had a notably worse attitude toward the product. They were also less likely to believe that it was safe, healthy, and good for the environment.

“Worryingly, cultured meat as a ‘high-tech’ development has been a very dominant frame in early media coverage, which frequently features ‘science-themed’ photos such as meat in a petri dish in a lab,” Bryant said in a statement. “This may be causing consumers to develop more negative attitudes towards cultured meat than they otherwise might.”

Some cultured meat firms have shied away from these associations, like Memphis Meats:

The research also found that vegetarians and vegans were less likely to try cultured meat, especially when compared to plant-based alternatives like the Impossible Burger. While these emerging products have found their way into Burger King, research suggests they could be overtaken by cultured meat as early as 2040.

Campaigners like the Good Food Institute have witnessed the industry explode in size over the past few years, with capital investment expanding to $50 million in 2018. Over that time, the price of one burger has dropped from $325,000 in 2013 to $8.15 by 2015. Cultured meat is virtually unknown by the general public at this stage, and its backers are going to want to make a good first impression.

Read the abstract below:

Cultured meat can be produced from growing animal cells in-vitro rather than as part of a living animal. This technology has the potential to address several of the major ethical, environmental, and public health concerns associated with conventional meat production. However, research has highlighted some consumer uncertainty regarding the concept. Although several studies have examined the media coverage of this new food technology, research linking different frames to differences in consumer attitudes is lacking. In an experimental study, we expose U.S. adults (n = 480) to one of three different frames on cultured meat: “societal benefits,” “high tech,” and “same meat.” We demonstrate that those who encounter cultured meat through the “high tech” frame have significantly more negative attitudes toward the concept, and are significantly less likely to consume it. Worryingly, this has been a very dominant frame in early media coverage of cultured meat. Whilst this is arguably inevitable, since its technologically advanced nature is what makes it newsworthy, we argue that this high tech framing may be causing consumers to develop more negative attitudes toward cultured meat than they otherwise might. Implications for producers and researchers are discussed.

More like this
Science
7.30.2022 7:00 PM
The latest deadly threat to polar bears? Your trash
By Thomas Scott Smith and The Conversation
Science
23 hours ago
Watch sea sponges sneeze out stringy mucus in slow motion
By Jennifer Walter
Science
7.28.2022 6:00 PM
Meet the tiny critter that pollenates seaweed like a bee
By Jennifer Walter
Related Tags
Share: