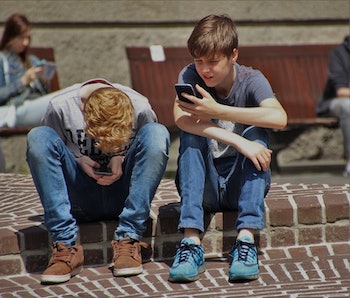 Whether it’s to fight FOMO or play Fortnite, teens are tethered to their phones. Smartphone addiction has become so bad that even smartphone creators want to help people get off their devices, and recent surveys show that half of American teens “feel addicted” to their mobile devices and 78 percent of them check their devices hourly. These habits, write researchers in a new JAMA study on teens, are linked to the development of the classic symptoms of attention-deficit/hyperactivity disorder.

The paper is an analysis of the social media habits and mental health of 2,587 teenagers who, crucially, did not have preexisting ADHD symptoms at the beginning of the study. Those who frequently used digital media platforms over the course of the two-year study, the researchers show, began to display ADHD symptoms, including inattention, hyperactivity, and impulsivity. It’s too early to define the nature of the link, the researchers warn, but it’s a good place to start.

“We can’t confirm the causation from the study, but this was a statically significant association,” co-author and University of Southern California professor of preventative medicine and psychology Adam Leventhal, Ph.D. explains. “We can say with confidence that teens who were exposed to higher levels of digital media were significantly more likely to develop ADHD symptoms in the future.”

The study participants, who were between 15 and 16 years old, represented various demographic and socioeconomic statuses and were enrolled in public high schools in Los Angeles County. Every six months between 2014 and 2016, the researchers asked the teens how often they accessed 14 popular digital media platforms on their smartphones and examined them for symptoms of ADHD. Mobile technologies, Leventhal explains, “can provide fast, high-intensity stimulation accessible all day, which has increased digital media exposure far beyond what’s been studied before.” In the past, studies on the link between exposure to technology and mental health focused only on the effects of TV or video games.

This study “raises concern” about the ADHD risk that digital media technology poses for teens, but Leventhal emphasizes that there’s no evidence of causation and that further study is needed. Scientists know that ADHD manifests as physical differences in the brain, but they’re still not sure what causes it. There are multiple non-exclusive theories, which include the genes of the individual, a low birth weight, and exposure to toxins like cigarettes when in the womb.

Conversely, smartphone use has been linked to changes in the brain as well, but none that have been associated with ADHD. More studies are needed to know whether frequent use of digital platforms is linked to ADHD or whether it underlies a completely different disorder that shares similar symptoms.