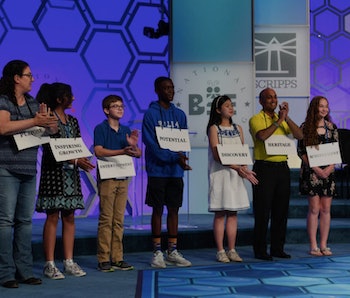 Called “the Hunger Games of the mind,” by John Oliver, the 2018 Scripps National Spelling Bee kicks off Tuesday, with finals happening later this week.

If you’ve never watched the Spelling Bee, given the consistently depressing state of current affairs, this might be a perfect time to start. It’s just cute, earnest kids between the ages of 8 and 15 spelling their little hearts out — and they get showered in confetti when they win. The first place winner also receives a $40,000 cash prize, meaning spelling is nothing to scoff at.

This year’s bee — called Bee Week — is taking place at the Gaylord National Resort and Convention Center in Oxon Hill, Maryland. It features a record number of spellers at 516 competitors, and there are a full three days of coverage to get us to the winning kid. The preliminary competition began at 9:15 a.m. Eastern on Tuesday, and the final competition will get going by 8:30 p.m. Thursday.

You can watch the events on cable, or they can be streamed online with a cable provider via Watch ESPN, as well as the ESPN app. The National Spelling Bee Twitter account is also live-tweeting the competition.

Scripps and ESPN have collaborated on a website that will let you play along with the competition as it happens. You can sign in online here.

What’s in a Word?