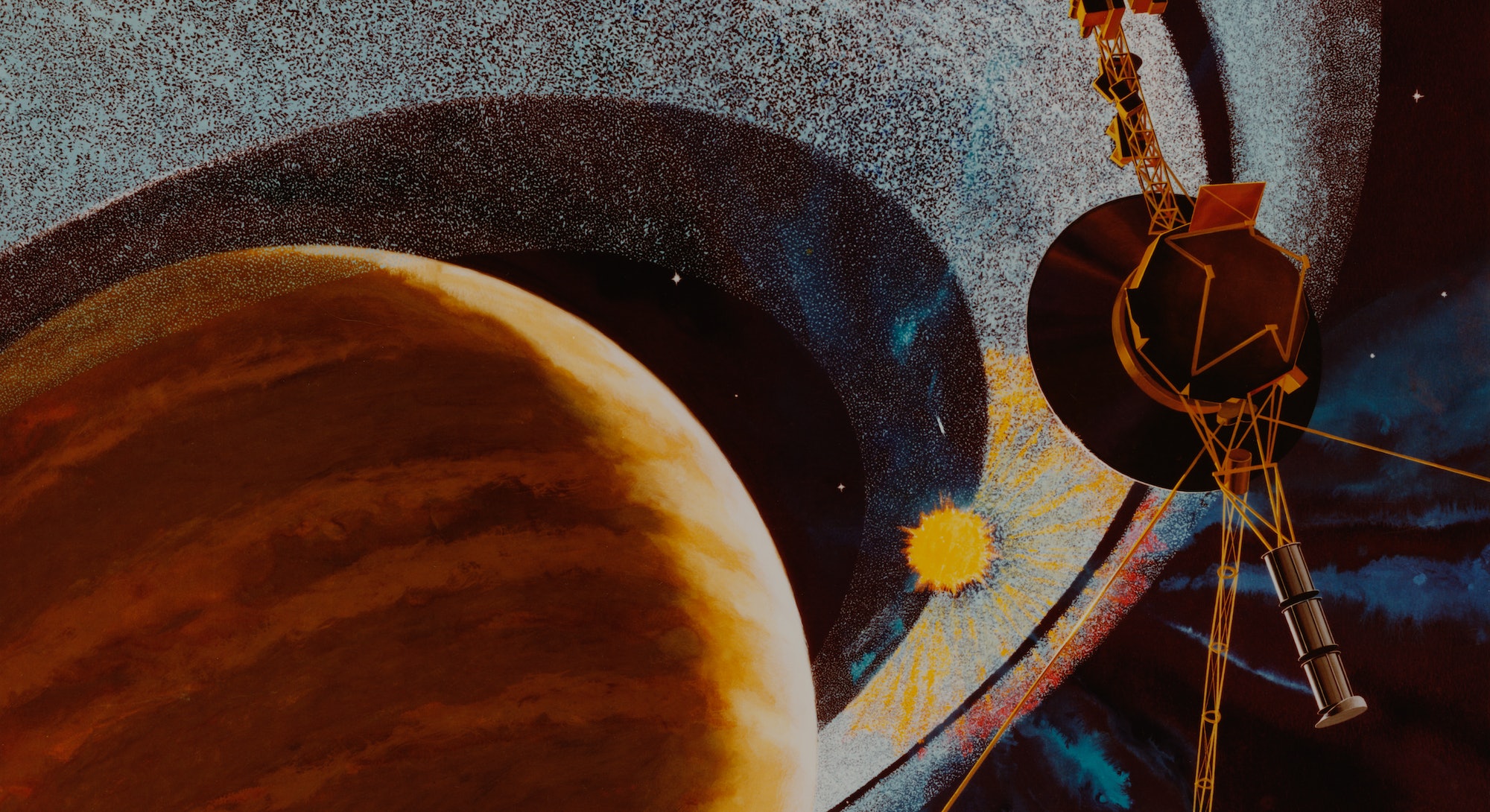 NASA’s iconic Voyager 1 space probe blasted off from Cape Canaveral Air Force Base on September 5, 1977, with a mission to study and explore the outer Solar System and points beyond. Today, it is the most distant spacecraft from Earth at a distance of about 14.6 billion miles away from Earth and continues to speed away at about 38,000 mph in the direction of the constellation Ophiuchus.

Voyager 1 was dreamed up as a part of NASA’s Grand Tour of the outer Solar System that would visit all of the outer planets including then-planet Pluto. Two ships heralded what became the Grand Tour, when Pioneer 10 was sent to Jupiter and Pioneer 11 was sent to Jupiter and Saturn. The exorbitant costs of each of these unique spacecraft made NASA reconsider the Grand Tour and instead came up with Mariner Jupiter-Saturn, later renamed to Voyager.

William Kurth, a research scientist at the University of Iowa’s Department of Physics who was a principal investigator on the Voyager program, tells Inverse, “back then, launching two spacecraft (Voyager 1 and Voyager 2) was more of a risk mitigation because if one failed, you still had mission.”

Voyager 2 was actually launched before Voyager 1. It left Earth on August 20, 1977, while Voyager 1 launched on September 5. Because the two spacecraft had different trajectories, Voyager 2 needed to go first to align just right for each target (though Uranus and Neptune weren’t officially part of the trajectory yet) while Voyager 1 needed to launch faster to get to Jupiter first.

The prime missions for both Voyagers were to visit Jupiter and Saturn, but Kurth says that the engineering team designed the Voyagers such that the trajectory would not preclude them from going on to Uranus and Neptune. In planning for the missions, Carl Sagan convinced the team it was important to do a close flyby of Titan, Saturn’s largest moon. Titan has a thick largely nitrogen atmosphere, and the atmospheric pressure is 50 percent greater than it is here on Earth.

“It turns out in order to do the Titan flyby, you can no longer arrange your trajectory at Saturn to kick you out to torque in the direction of Uranus,” explained Kurth. “So the decision was made that Voyager 1 would go to Jupiter, and Saturn with Titan. And that would be its final planetary encounter.”

If Voyager 1 was successful at Titan, then Voyager 2 would skip Titan and go to Uranus, and eventually to Neptune. And so, after all the planetary encounters with a close flyby of Neptune with Voyager 2, NASA renamed the mission to the Voyager interstellar mission. Kurth said that NASA’s interest then shifted to see how far out the spacecraft could go and what kind of data they could collect.

Before Voyager 1 could even arrive in interstellar space, scientists needed to determine what that actually meant. Around the same time that NASA launched the Voyagers, the scientific community began to identify the location of the boundary between the Sun’s energy halo (the heliosphere) and interstellar space. Kurth says it was determined that this interface existed at about 120 astronomical units — an astronomical unit representing the distance between the Sun and Earth, about 93 million miles.

Voyager 1: The most famous photo and the Golden Record

In addition to its study of Titan, which paved the way for the departed Cassini/Huygens mission and the upcoming Titan Dragonfly mission, Voyager 1 made history on February 14, 1990, when it turned back towards its trajectory and took one last photo: The Pale Blue Dot. That tiny dot against the backdrop of space was taken at a record distance of 6 billion kilometers, or 40.5 astronomical units. It was one of the photos in Voyager 1’s Family Portrait, featuring a mosaic of 60 frames and frames of six planets that ultimately reveal their relative locations.

In the renown Pale Blue Dot photo, Earth is smaller than a single pixel. Carl Sagan gave the photo its namesake and also used it as the title for his book published in 1994:

Look again at that dot. That's here. That's home. That's us. On it everyone you love, everyone you know, everyone you ever heard of, every human being who ever was, lived out their lives. The aggregate of our joy and suffering, thousands of confident religions, ideologies, and economic doctrines, every hunter and forager, every hero and coward, every creator and destroyer of civilization, every king and peasant, every young couple in love, every mother and father, hopeful child, inventor and explorer, every teacher of morals, every corrupt politician, every "superstar," every "supreme leader," every saint and sinner in the history of our species lived there-on a mote of dust suspended in a sunbeam.

Carl Sagan’s involvement in the Voyager program brought a lot of mystique. In addition to a radio communication system, computers, three thermoelectric generators, and a host of scientific instruments, each Voyager spacecraft carried with it a gold-plated audio-visual disc in the event that it would be discovered by extraterrestrial life. Each record contains photos of human life, greetings in 55 different languages, sounds of whales, the ocean, and a selection of music from Mozart to Chuck Berry.

After Voyager 1 shut off its camera, it wouldn’t be until February 2003 that scientists began to question if Voyager 1 was approaching the edge of the Sun’s energetic influence.

Scientists began to question if spacecraft reached the point in the Solar System where solar winds reach subsonic speeds, a zone called the termination shock that is encountered just before an object officially enters interstellar space. This was difficult to confirm, however, since the solar wind detector had been non-operational since 1990.

Where does interstellar space begin?

Voyager 1 helped determine that the heliosheath was not smooth, but actually contained massive bubbles as large as a single astronomical unit that are thought to be formed by the interaction between solar wind and the interstellar medium. In December 2010, Voyager 1 passed the region where solar wind was capable of going because it was pushed sideways by interstellar wind. Since then, there has been no detection of solar wind, which helps hold this hypothesis.

In December 2011, at a distance of about 11 billion miles from Earth, Voyager 1 entered “cosmic purgatory,” or the outermost layer of the bubble around our Solar System. Charged particles that come from the Sun are less intense, the Sun’s magnetic field is more compressed, and there is leakage of high energy particles from inside the Solar System to interstellar space. At this point, the interaction between interstellar space and the Sun’s energy fields more tangible.

Debate amongst scientists continued to rage over whether or not Voyager 1 had entered interstellar space. Voyager 1’s instruments had been quiet. Kurth explains what put the nail in the coffin was the detection of plasma.

One of the instruments on Voyager 1 was meant to detect plasma waves. The higher the frequency of these waves, the denser the plasma. For nine years, there had been no plasma as Voyager 1 traveled through the bubble of the heliosphere — they were insulated from the plasma, but finally there was a plasma detection that was colder and indicated entering the interstellar medium, entering interstellar space in August 2012.

Editor’s note — This post was updated on September 9, 2022. It was changed to reflect that the Pioneer program was not part of the Grand Tour, to correct that William Kurth was a primary investigator rather than co-investigator, the reason for the launch order, and to clarify the plasma wave detections.