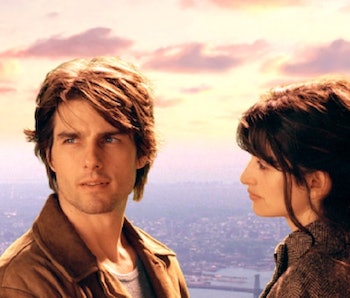 While many of the 2001 movie’s plot points haven’t aged well in 2022, there’s one central conceit that has perhaps become even more relevant since the film’s release: the quest for eternal life. Warning: spoilers ahead for Vanilla Sky.

The story centers on David, a handsome rich heir who is, frankly, a selfish jerk. He has only one friend who cares about him — that is, until he meets the mysterious and beautiful Sofia, who sweeps him off his feet. But when a car accident causes severe damage to his face, the now-insecure David grows even more desperate in his attempts to woo Sofia.

At the end of the movie, we find that the main character, David, isn’t actually in a relationship with his girlfriend, Sofia, but, rather, that he died and his body is being frozen by a company known as Life Extension, which will revive his body at a future date.

At first glance, this plot twist seems like a ludicrous Hollywood concoction, but as it turns out, there are real-life companies that offer the ability to freeze clients’ bodies for a price, with the hope that they can be brought back to life at a future date when technology makes it viable — a concept known as “cryonics.” Inverse spoke with cryonics experts to unpack whether Vanilla Sky will ever be possible in real life. The answer: it depends on whom you ask.

“The prospect of bodily resurrection following freezing is fanciful,” Clive Coen, a professor of neuroscience at King’s College London who has written about cryonics, tells Inverse.

Is Vanilla Sky a realistic depiction of cryonics?

Cryonics is the process of freezing a human body upon death with the intent of later thawing and bringing that person back to life. It is not the same as cryogenics, which simply means the science of freezing things at very low temperatures.

Cryonics companies use various cryopreservation techniques to freeze and preserve tissues or even a whole living organism in liquid nitrogen at 196 degrees Celsius below zero (-320 degrees Fahrenheit). In effect, by deep freezing and preventing the body’s cells from decaying, scientists put the body into a form of stasis known as “suspended hibernation.”

So, it might seem like Vanilla Sky’s description of the cryonics process — narrated by an unflappable Tilda Swinton — is fairly accurate:

Chryonization: the journey of the human body after awakening after preservation in extremely low temperatures. Within one hour after your passing, your body will be transferred to a vessel and frozen at 196 degrees below zero…. nothing will affect your suspension hibernation.

But Peter Tsolakides, founder and director of Southern Cryonics — the first cryonics facility in the Southern Hemisphere — says while this characterization of cryonics is fairly accurate in the broad strokes, it misses some important details.

“Not far off, but [an] hour is optimistic unless the person passes in the facility or very close to the facility itself,” Tsolakides says.

Tsolakides adds that after passing antifreeze through a human’s body — a process known as perfusion — the patient slowly gets brought to the freezing temperatures in a computer-controlled chamber over three days before being stored long-term in liquid nitrogen.

“The reason is to minimize stresses occurring in the brain — stresses can cause large cracks to form in the brain —which may occur with rapid drops to liquid nitrogen temperatures,” Tsolakides explains.

Additionally, the suspension process cannot be performed on patients while they are still alive — instead, patients must agree to have the procedure performed after their death under the right conditions.

“If they are still alive and you perform a suspension, this is murder. That is why all cryonics processes start after legal death,” Tsolakides says.

But Coen says that suspended hibernation is not possible in humans as the movie depicts. Hibernation, which involves “living at a low temperature that must be above the freezing point,” is possible in some animals that can lower their body’s metabolic needs, but not humans.

“Certain surgical procedures on humans require an induced reduction in the metabolic rate, but this is possible for only a limited amount of time,” Coen says.

He adds that in the movie, “hibernation’ is an entirely inappropriate and ignorant term given the reference to “196 degrees below zero”.

Can we entertain our minds in suspended hibernation?

At the end of the movie, we realize the happy life David has built with Sofia — as well as David’s darker turn as a man jailed for murder — are simply a “lucid dream” fabrication developed by Life Extension to entertain their client in his frozen slumber. As the company representative explains:

Upon resurrection, you will continue in an ageless state. Preserved, living in the present, with a future of your choosing. Your death will be wiped from your memory. Your life will continue as a realistic work of art. Life Extension’s promise to you: Life, Part 2. A living dream.”

No one in cryonics is seriously suggesting this kind of Hollywood sci-fi technology is a possibility now — but perhaps we could achieve this sort of Metaverse after death in the future.

Tsolakides says that with “the potential developments in mind uploading, AI and computers, there is a reasonable chance that your mind may be uploaded to a computer so you can live in a virtual world in say 50 to 100 years' time.”

In that sense, the movie’s ending — which involves letting David choose to transfer his body back to the modern world or stay in the virtual world — isn’t totally farfetched.

But some, like Coen, would frown upon hypothetical cryonics companies selling a fantasy dreamworld scenario to clients since none of it is possible in our present reality.

“These statements amount to a fantasy that’s fueling a shameless attempt to make money,” he says.

Are we closer to achieving cryonics now than when Vanilla Sky came out in 2001?

Cryonics is still very much hypothetical now. The end of the movie, which takes place in a future Earth, suggests it is possible. But in our present, no one has been successfully revived this way.

There are two parts to cryonics: suspension and revival. Tsolakides is very optimistic about successfully doing the former without harming the patient.

“If you act quickly after legal death — legal death is not brain death — there is a good chance that all the brain activity is still intact and will be frozen at that very point,” Tsolakides says.

Coen is less optimistic, stating that freezing a human body is more difficult than simply freezing sperm — as we do for infertility treatments — because the brain will likely suffer an “immense amount” of fracturing damage from the freezing temperature.

“There is no evidence to support the professed faith in the antifreeze treatment,” Coen says

While the second part of cryonics — bringing people back to life — isn't possible now, Tsolakides believes recent and future developments in brain preservation techniques, nanotechnology, AI, and other fields could lead to a more promising future for revival.

If that’s the case, Vanilla Sky — as strange and bizarre a movie as it is — may offer a window into our distant future.

“Imagine where we were in medicine and science 250 years ago and now try to project 250 years in the future. No one saw 250 years ago what developed,” Tsolakides

Vanilla Sky is available for streaming on Amazon Prime with a free EPIX or Paramount Plus trial or subscription.

More like this
Science
Jan. 14, 2023
Did Minority Report predict our current reality?
By Tara Yarlagadda
Science
Jan. 21, 2023
A deadly fungal plague swept the world of The Last of Us — is it realistic?
By Tara Yarlagadda
Entertainment
19 hours ago
Attack the Block sequel will take a page from the two greatest sci-fi sequels, director says
By Eric Francisco
LEARN SOMETHING NEW EVERY DAY.
Related Tags
Share: