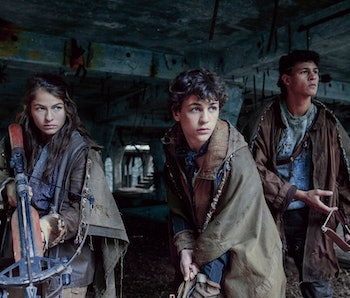 The year is 2074. Several decades prior, a mysterious crisis — known as Black December — plunged the world into a global power blackout, killing off most of humanity.

The surviving humans now live in small, scattered tribes across Europe. They have no memory of the modern conveniences — running water, or even Netflix — that once depended on having a stable electrical grid.

The post-apocalyptic series Tribes of Europa premiered on Netflix in February and is still available for streaming. At first glance, it might seem like the fever-dream nightmare of a doomsday prepper. But is it really so far-fetched?

Daniel Kirschen is a professor of power and energy systems at the University of Washington. He tells Inverse one way we could possibly get close to this nightmarish scenario is a series of global cyberattacks (something Tribes also hints at). This means one country hacking into another country’s electric grid, taking control, and creating a blackout. Think of a nuclear arms race, but on a cyber level.

“You could imagine one country attacking another and the other one retaliating, and so on,” Kirschen says.

In the aftermath, it would probably take a few days to put the grid back together and retake control of the grid, Kirschen says. But if heavy equipment damage occurs, then it would likely take much longer — leaving people without power for prolonged periods.

This scenario is already on the minds of some experts. In 2015, former CIA director R. James Woolsey — yes, the same CIA director who later became a key witness in special counsel Robert Mueller’s Trump investigation — testified before Congress about an eerily similar possibility.

Woolsey testified that a powerful geomagnetic storm or an electromagnetic pulse (EMP) attack from an adversarial entity — ranging from small battery-powered devices to nuclear warheads — could wipe out the U.S. electrical grid for up to two years.

When asked by Senator Ron Johnson what would happen to society if the grid was down for that long, Woolsey made a grim prediction.

“There are essentially two estimates on how many people would die from hunger, from starvation, from lack of water, and from social disruption,” he replied.

Woolsey’s projection might seem like hyperbole, but the U.S. government is taking it very seriously. In 2017, the Department of Homeland Security (DHS) compiled a 147-page report on how to deal with the cascading, damaging effects of a long-term power outage. A subsequent 2020 DHS report found that “EMP presents a strategic threat to the nation.”

This threat is, for now, simply a scenario: something that mirrors the plot of sci-fi shows like Tribes of Europa; an abstract threat. But this isn’t to say that we’re not already experiencing an energy crisis with at-times deadly and far-reaching implications

In February, a surprise winter storm plunged Texas’s electrical grid into darkness. It left millions of Texans without power in freezing temperatures and killed 86 people in the Austin area alone. Texas Monthly reported the state was “seconds and minutes away” from a months-long blackout.

Both the recent energy crisis in Texas and the scenario played out in Tribes of Europa highlight the very real need for energy resilience. This is the ability to provide a stable power supply during events that could result in a power failure, such as natural disasters, extreme weather, accidents, equipment failure, or even cybersecurity attacks.

It’s something the U.S. military is thinking about. It conducts energy resilience tests on its bases to see how the military could maintain vital operations in the event of a prolonged power outage. As extreme weather events become more frequent across the country, in part due to climate change, our country’s energy resilience will be increasingly tested.

Between 2012 and 2016, roughly 95 percent of electricity disturbances occurred primarily due to severe weather, with 31 percent of the outages occurring due to Superstorm Sandy alone.

But are we actually on our way to building true energy resilience? How can we avoid a catastrophic energy crisis and modernize our electrical infrastructure for the 21st century?

In order to answer these concerns, experts tell Inverse we need to back up and answer three basic questions about power systems, drawing upon lessons learned from Texas and abroad.

How does the U.S electric grid work?

The North American grid is broken down into four parts, covering the U.S. and Canada:

Why is Texas separate from the rest of the U.S.?

This lack of interconnected power was a big problem during the recent winter storm. Texas’s own grid, ERCOT, had a harder time getting support from other regions when it was experiencing power outages. ERCOT, in turn, had to deploy rolling blackouts in order to prevent the grid from shutting down, Kirschner explains.

“Demand kept going up quickly because it was getting very cold,” Kirschen says. “On the other hand, the generators start failing because they had not been properly weatherized, meaning that when it got cold, it stopped working.”

How vulnerable are power systems in the U.S?

The electric grid in the U.S. faces a number of threats to its power systems, but two of the most concerning are extreme weather events and natural disasters, and cybersecurity attacks. These were the factors underlying Woosley’s testimony.

Modernizing our grids would better prepare the U.S. for extreme weather events, says Kirschen. But in order to modernize the grid, you have to first get past the Regional Transmission Organizations (RTO) or Independent System Operators (ISO). RTOs were set up in the 1990s to run electricity networks in the U.S.

“Essentially, what you have is a number of generating companies who own generating plants that produce power that compete in the market — to produce the power that you and I and everybody else consume,” Kirschen says.

Basically, RTOs are “worrying all the time” that bad things could happen which would make energy systems less reliable. Their job is to provide a cushion or margin of error so we continue to have power in case bad things happen.

“They should be spending money on making the grid more resilient to these natural disasters.”

But the utility business is also conservative by nature, Kirschen says. They’re slow to change and deeply bureaucratic. And, in order to modernize grids, utility regulators have to spend money. They can only do that if they get the approval of the local public utility commission.

“And so they have to convince the regulator that they should be spending money on making the grid more resilient to these natural disasters,” Kirschen says.

Regulators are often hesitant to take on the costly effort of modernizing grids, since these extreme weather events and natural disasters seem to be rare — although, climate change is likely to exacerbate the severity and frequency of these events. A combination of pressure from elected officials and the general public would help persuade regulators to spend the money needed to modernize our grids, Kirschen says.

How do renewable energy sources play a role in a modernized electrical grid?

Nick Hughes is a senior research fellow at the Institute for Sustainable Resources at University College London. His Ph.D. research focused on renewables in the UK electricity system, particularly when it came to adapting to growing energy demand in the future.

Hughes tells Inverse that renewable energy is crucial to ensuring energy resilience and modernized power systems in the coming decades.

“Renewables have to fit in [to a modernized grid], in order to displace electricity produced by fossil fuels,” Hughes says. “We have to reduce the greenhouse gas emissions associated with everything we do, including our energy production.”

He notes wind and solar are particularly attractive options since the cost of energy production from these two sources has significantly dropped in the last two decades. This makes them “extremely competitive” with fossil fuels, Hughes says.

Renewable energy sources come with their own unique set of challenges, which could be a problem when it comes to transitioning grids based on fossil fuels to renewables. We’ve developed power grids that rely on the storage of fossil fuels, “which means that your power station can turn up and turn down relatively easily in response to demand,” Hughes says.

But we really can’t store wind and solar power in the same way as fossil fuels. This poses “a big problem for our grids” according to Hughes.

Hughes says there are still a few ways that most countries can achieve energy resilience, even as we transition to renewable energy.

One option could be a combination of wind and solar and another more flexible energy source we could rely upon if the wind or solar goes down. Another is to better integrate the power systems of neighboring areas. For example, if, one region in the European Union has a temporarily low supply of renewable energy, it could draw upon spare power in another region’s power system to help with short-term electric power. In the case of the U.S., that could mean one of the regional power systems pulling from another, Kirschen says.

Interestingly, Hughes also thinks innovative smart technology could help resolve some of the problems with renewable energy. He imagines smart appliances could communicate with the electric grids, and in turn use power when there’s the most renewable energy available — messages like “it’s windy now, so it’s time to charge your car.”

This “smart communication” would help consumers save costs on electric bills, too, while maximizing convenience and preventing overwhelming the power system with too-high demand.

Ultimately, Hughes believes that it is possible to safely transition from our largely fossil-fuel-based power systems to more renewable electrical grids in the near future. We can probably avoid a Tribes of Europa-style collapse. But that involves achieving energy resilience — and fast.

Tribes of Europa is streaming on Netflix now.