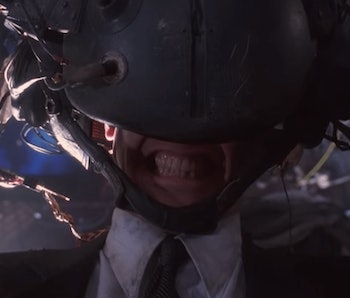 More than 20 years ago, Keanu Reeves starred in a fast-paced sci-fi action movie where he unlocked the secrets stored in his mind. No, not The Matrix.

Instead, I’m referring to the 1995 sci-fi sleeper hit, Johnny Mnemonic, which features Keanu’s character, the titular Johnny, as a “mnemonic” courier in a futuristic cyberpunk world, whom clients hire to upload vast quantities of information into his mind through brain implants. Oh, and did I mention a super-intelligent dolphin also makes an appearance in the story?

It’s equal parts thrilling and silly, but this 1995 movie also was surprisingly prescient: in an era before the Cloud, it predicted how safely storing digital data would become a coveted ability in a globalized world susceptible to hackers of all kinds. It also foresaw the rising scientific interest in brain-computer interfaces (BCI) — devices that enable electrical signals between the brain and machines — which entrepreneurs like Elon Musk are now using to achieve lofty goals of achieving “symbiosis” with artificial intelligence.

But can people really store information in a digital brain the way they do in the movie?

“Using the brain to store files, that then have to be retrieved, is implausible and sounds ineffective to me,” Michael Graziano, a professor of psychology and neuroscience and head of the Graziano Lab at Princeton University, tells Inverse .

Where do we store information in the brain?

To understand the wacky “science” behind Johnny Mnemonic, you must understand how the human mind works. As a mnemonic courier, Johnny typically uploads information like data and facts into his mind.

According to Graziano, this kind of general knowledge is known as “semantic memory,” which is different from “episodic memory” which includes memories of personal events that happened to us.

“Semantic memory is probably stored in the patterns of connectivity among networks that span the entire cerebral cortex,” Graziano says.

Contrary to popular belief, the hippocampus — a structure embedded deep in the brain dealing with memory and learning — is mostly involved in storing new information, but after the information gets stored in Johnny’s mind, it’s likely the cerebral cortex — the outer layer of the brain associated with higher-level brain functions like consciousness — that takes on a central role.

“You might say, if information is stored in the book of the cerebral cortex, then the hippocampus is the printer that prints information into the book,” Graziano adds.

Can we really upload information to the mind?

The movie’s central premise hinges on Johnny’s ability to upload information from his mind — and subsequently, download it — using some type of clunky brain-computer interface known as “wet-wired brain implants” in the movie. But can we really upload information to the brain like a USB file plugged into a computer? Some experts say yes — with a big caveat.

According to Garrett Mindt, assistant professor at Florida Atlantic University and Program Director at the Center for the Future Mind, uploading information to the brain through external or internal brain-computer-interfaces requires first understanding the “organization and structure of the brain areas responsible for this kind of information storage in the brain.” Second, we must design systems “which can allow for ‘talk’ between our neural systems and this hypothetical storage medium.”

But other experts there is likely no way we can design such a hypothetical system in the first place, “because the brain has no mechanism for receiving digital files, or for storing digital files, and the brain doesn’t even use digital codes like those of digital computers,” Gualtiero Piccinini, associate director of the Center for Neurodynamics at the University of Missouri-St. Louis, tells Inverse.

Graziano agrees, stating that brains don’t store information digitally but instead by subtly adjusting the synaptic weights between neurons.

“We already have computers that work in that manner — artificial neural networks — and they do not resemble digital memory,” Graziano says, adding that trying to reconfigure digital information into neural network patterns is “so difficult as to be essentially impossible.”

Mindt says that although the idea of the brain as a computer has become a common metaphor nowadays, certain theories of consciousness, such as Integrated Information Theory (IIT) claim the straightforward computations of computers are “qualitatively different” from the structures in the brain responsible for consciousness.

“The nature of the computations themselves or the kind of information structures that our brains utilize is still a question that needs answering before the kind of sci-fi upload or augmentation questions could become a reality,” Mindt says.

Can people learn information without knowing it?

In the movie, Johnny uploads information into his mind, but he’s unaware of the contents, which can only be unlocked upon downloading it into a device using a three-part code. As it turns out, this part of the movie is actually somewhat plausible.

Piccini says a good example of people who learn information without consciously knowing it are savants — people who “develop or start expressing special abilities without knowing how they acquired them.” Another good example is people who start speaking new languages after head injuries, despite not previously understanding the language.

“And there you go: secret files implanted in a person”

“Most of what the brain ‘knows’ is not verbally or consciously accessible. So, yes, in principle. But I have to say, it’s all far-fetched,” Graziano says.

Graziano explains that a better way to upload digital information — rather than strapping on a brain-zapping device like in Johnny Mnemonic — into someone’s mind is to encode the files digitally through DNA. You could inject the DNA into someone’s skin using something like a plastic bead. DNA encoding has been performed before with great success, according to Graziano.

“And there you go: secret files implanted in a person,” Graziano says. “It lasts for tens of thousands of years before it degrades, and you can code the entire Library of Congress in a droplet.”

The Inverse analysis — At the end of the day, Johnny Mnemonic is a ludicrous movie — it’s science fiction more fiction than science — but an entertaining one that provides fodder to discuss how brains and AI may become increasingly intertwined in our future.

“I never did see that movie. I heard the story was kind of dumb. I like The Matrix, though,” Graziano says.

Johnny Mnemonic is streaming now on Netflix, but is leaving soon on October 31.