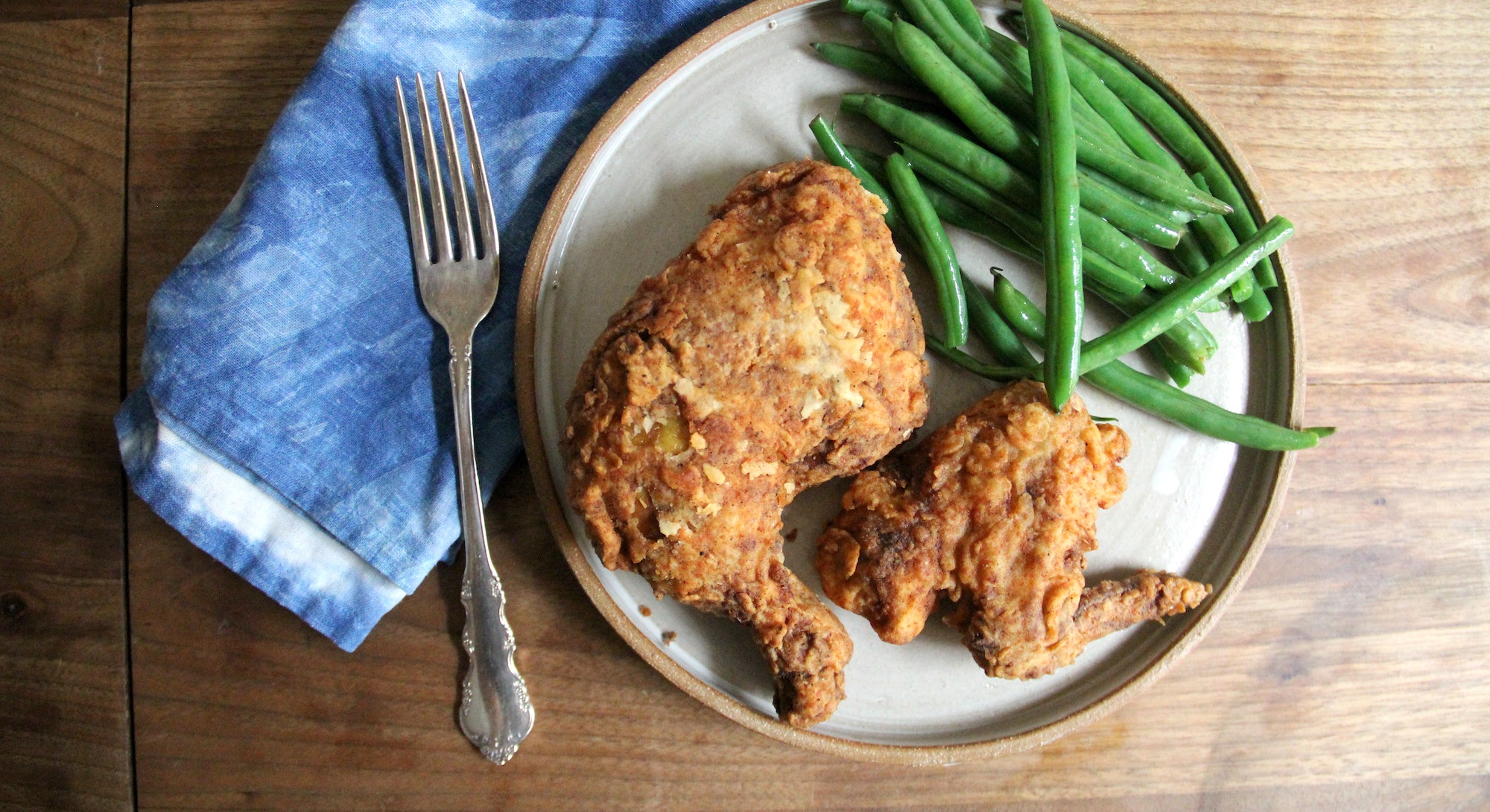 The perfect fried chicken should be a riotous assembly of flavor and texture. The exterior is both crispy and crunchy. The breading is spiked with salt and spices and holds just the right amount of fat. The interior should be well-seasoned and moist. How does something as simple as a pan of hot oil create all of that?

The key to flawless fried chicken is preparation. Before you heat a drop of oil, you should have a plan of action. Know where the tongs are. Have your chicken prepped. Set up a station to place the pieces on as soon as they come out of the oil. If you’re feeling particularly cautious, call up a professor with a Ph.D. in food science and nutrition and ask him how to effectively harness the power of frying to create the best possible dinner.

Dr. Eric Decker is a professor at the University of Massachusetts in Amherst. His work focuses on lipid oxidation and lipid bioavailability. He’s an overqualified fried chicken advisor, to say the least. Luckily, he’s also an avid home cook who was empathetic towards my mission to create a platter of golden drumsticks.

Over the phone, Dr. Decker explained that frying is “probably the most efficient heat transfer type of cooking.” Water can only be heated to its boiling point of 212°F before it becomes unstable and flies off into the air as steam. Oil can be heated far above this temperature. Of course, ovens can also achieve high heat, but in an oven, the heat source doesn’t have the same close contact with the food.

This high temperature is what gives fried food its satisfying texture. Because the oil is so much hotter than the boiling point of water, the water trapped in the cells of the chicken will instantaneously boil as soon as it’s introduced to the pan. This reaction, which Dr. Decker refers to as “flash evaporation,” creates steam. As the steam is formed, water molecules expand, generating pressure. This pressure sends the water molecules flying out of the chicken into the oil and the air, creating a crunchy, dry exterior with a satisfying bite.

“I was rewarded with a veritable symphony of bubbles: physical proof of flash evaporation.”

The end result is appealing, but working with hot oil at home can be nerve-wracking. Unlike water, which will simply boil away to nothing, overheated oil can hit a smoke point. Dr. Decker describes the smoke point as the temperature at which oils will begin to thermally degrade. At this point, the oil will begin visibly smoking, take on an acrid taste, and impart some truly unpleasant flavors into food. If things progress a step further, oil can reach its flash point and burst into flames.

It’s unlikely a pot of oil will reach its flash point in a home kitchen. According to Dr. Decker, the large volume of oil required for deep frying makes it difficult to achieve that extreme heat. That being said, it doesn’t hurt to be cautious. Dr. Decker recommends keeping a lid nearby and quickly placing it on top of the pot in the event of a fire. With a tight seal, the fire will burn though all the oxygen in the pot and quickly extinguish itself. Dumping flour onto the flames is another way to safely extinguish them. Attempting to put the fire out with water would be the worst choice by far. Throwing water onto an oil fire would create the same flash evaporation reaction, but this time the steam and pressure will send oil and fire flying out of the pot and into the kitchen. Dinner will be ruined, property could be damaged, and at the very least, it will be a huge pain to clean up.

There isn’t one right oil for frying. Availability, health preferences, and allergens can all play a role in choosing an oil. To reduce risk and improve flavor, Dr. Decker recommends working with an oil that has a high smoke point. Olive oil has a good flavor but a relatively low smoke point. Canola oil has a higher smoke point, but canola is part of the cabbage family, so its oil can introduce some unwanted flavors. Safflower oil, peanut oil, beef fat, and duck fat all have high heat tolerance and good natural flavor. I stocked up on peanut oil because it’s inexpensive, readily available, and I don’t have any immediate plans to host friends with nut allergies. Frying has a tendency to spew oil particles into the air and onto the counters, so steer clear of this oil if you live with someone who has a nut allergy, even if they won’t be eating the food.

My journey towards a homemade fried chicken dinner started 24 hours in advance. The night before cooking, I tossed the chicken into large plastic bags along with a mixture of buttermilk, salt, and pepper, and placed the whole setup in the fridge. Brining your chicken will flavor the inside of the meat and create a juicier finished product. While I slept, the natural sugars in buttermilk and the added salt bonded with the chicken, working flavor into the surface of the meat. The pepper was just there to party.

When it’s time to bread and fry the chicken, it pays to be prepared. Organization helps keep this process clean, reduces risk, and creates a sense of control in a chaotic world. I started by setting up a breading station: brined chicken in a bowl to the left, breading in the middle, and a wire rack over a sheet pan to the right. When breading, it’s important to remember that dry sticks to wet. My chicken was covered with thick buttermilk brine, which created the perfect base for the flour to adhere to. This principal applies to hands as well. The cleanest way to work during the breading process is to designate one hand as wet and the other as dry. Pick up the chicken with the wet hand and place it into the bowl of flour. Use the dry hand to flip the chicken over, thoroughly coat it with flour, and deliver it to the rack or tray. If you stick to this method, you should be able to coat all of the chicken and still recognize your own hands at the end of the process.

My recipe suggested heating the oil while breading the chicken. It can take up to 20 minutes to get the oil screaming hot, so it’s tempting to save time by multi-tasking. I weighed the appeal of eating 20 minutes earlier against the risk of getting distracted and overheating the oil, and decided to take my time. After my chicken was prepped, I switched on the stove, clipped a thermometer to my pan, and kept one eye on the temperature white assembling my frying station.

Much like the breading station, a good frying station should allow the cook to seamlessly move the chicken through its stages. As you place the uncooked chicken to the left of the stove, the tongs on a spoon rest, and a wire cooking rack to the right of the stove, you should feel like a concertmaster tuning their violin. You are now ready to work in harmony with your tools.

A candy thermometer will tell you when the oil is hot enough to fry, but if no thermometer is on hand, you can test the temperature with a small cube of bread. When the oil is hot enough, bubbles vigorously engulf the bread as soon as it’s dropped in. Getting the oil hot enough is essential; you want to be sure to achieve that instantaneous boil. If the temperature is too low, the pressure in the chicken won’t be high enough to keep the oil out. The result will be a soggy piece of meat laden with oil.

When my thermometer hit 320°F, I gently plopped in three pieces of like-sized chicken and was rewarded with a veritable symphony of bubbles: physical proof of flash evaporation. Introducing several pieces of cold chicken into a pan of hot oil will naturally lower the temperature. It’s tempting to crank the stove up as soon as the thermometer starts to dip, but try to resist this urge. The temperature will rise again in a few minutes. Once my chicken was in the pan, I was committed to staying by its side

One of the great challenges of making fried chicken is ensuring that the inside cooks completely through. That golden crust of breading can make it difficult to gauge the doneness of the meat inside. If the oil is on the hotter side, the outside will look brown and done before the meat is thoroughly cooked. Ideally, I’d use an instant-read thermometer to check the internal temperature of each piece of chicken. Without an instant-read thermometer, you can watch the clock, keep the oil below 400°F, and caution your dinner companions not to eat it if it’s too pink.

For this batch of chicken, I worked mostly with physical cues. After about 15 minutes, the crust was deep golden brown, with a rugged surface like the face of mars. The bubbles had started to slow, indicating that most of the water had been cooked out of the exterior, and a crunchy shell had formed. Tongs in hand, I transferred the chicken pieces to my prepared drying rack.

The chemical action isn’t over once the chicken is out of the pan. While the chicken is frying, the water in the batter and the meat is constantly turning to steam, creating pressure that keeps the oil out. After the chicken has been removed, the pressure will equalize, and the cells that have forfeited their water molecules now form a tiny vacuum. This vacuum sucks in the oil on the surface of the food. The oil adds flavor and richness, but if too much is drawn in, the final product can end up greasy. Setting the finished product on a paper bag or a plate can leave it sitting in a puddle of its own oil and result in over absorption. Resting the chicken on a wire rack allows excess oil to drip away, guaranteeing a crispy finished product.

When the final pieces were out of the fryer, I turned the heat off and backed away. It’s best to allow the oil to cool for several hours before revisiting it, but you don’t need to throw it out. If you see yourself frying again in the near future, reusing this oil could actually improve the flavors of your next meal. As your first batch of chicken sat in the oil, it left a few of its molecules behind, flavoring the oil itself. Dr Decker suggests that this is part of the reason food fried in restaurants is so delicious; they often reuse oil several times. Of course, there’s a limit to this. During the frying process, the water that escapes from the food into the oil breaks the oil down and releases free fatty acids. Over time, the increase of free fatty acids actually lowers the smoke point of the oil, making it more difficult to execute high temperature cooking.

While the oil cools, exercise your right as the cook and take the first taste of chicken. As you bite down, marvel at the power of fat and protein. With just the right amount of heat, you created a crunchy exterior and juicy interior. To take this sensory experience up a notch, open up a bottle of Champagne. The wine’s bright acidity makes it the perfect pairing for fried chicken. Pour yourself a glass, and leave the dishes for someone else.