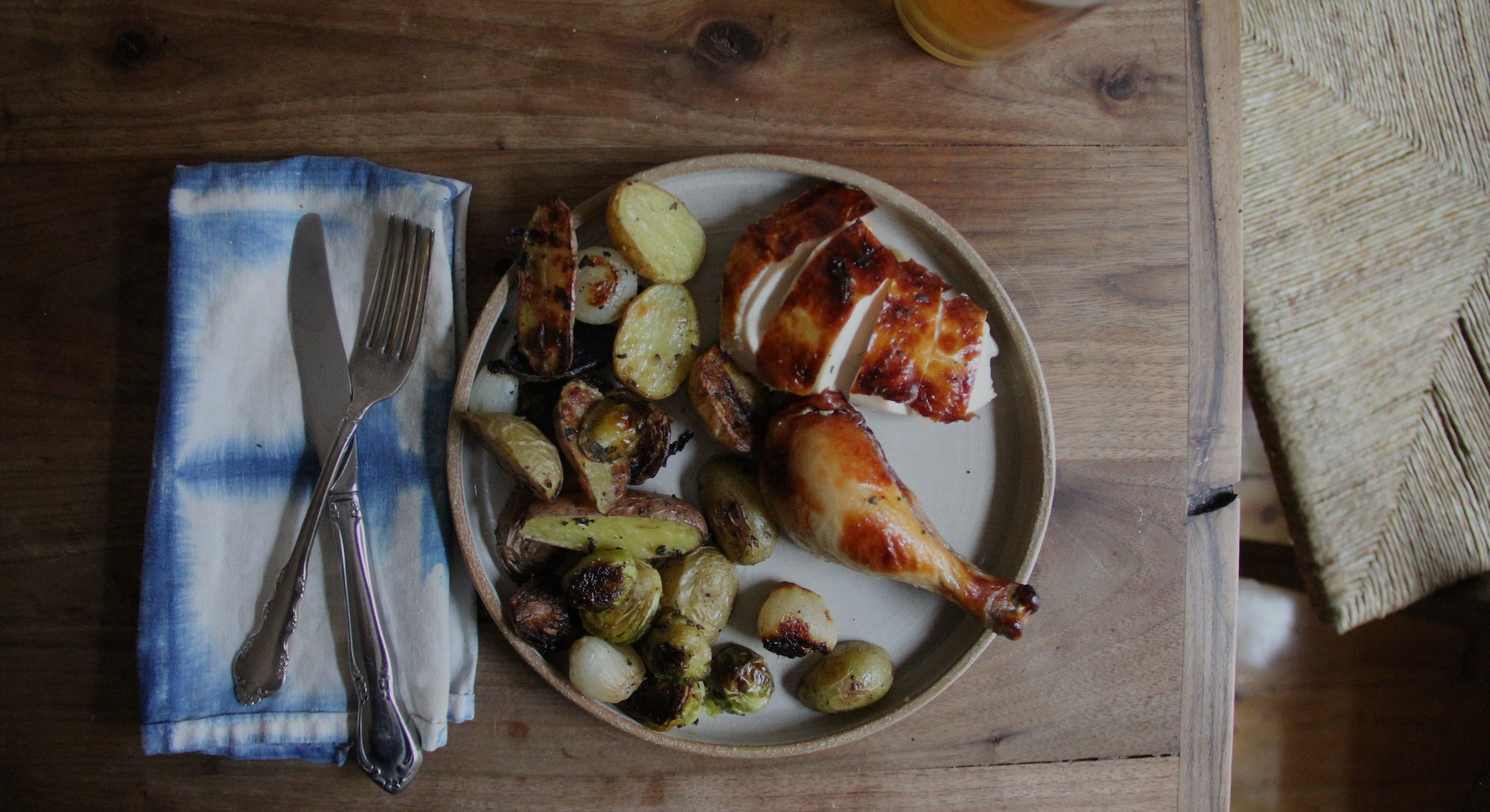 From personal experience, I can tell you alcohol enhances the flavor of food.

I know firsthand that a nice glass of red wine makes a good tomato sauce sing, and if you tell me that you have a cake with liqueur in it, I will tell you: I’ll be there soon. There are some things I just know to be true. But as a curious person, I wasn’t content relying on anecdotal evidence alone. I wanted to get to the bottom of why exactly booze elevates your dinner.

To deepen my understanding, I called up Roger Barth, a professor at West Chester University in Pennsylvania and the author of The Chemistry of Beer. I told him about my plans to make a chicken following a recipe from famed Harlem restaurant Red Rooster, and he was warmly encouraging.

The recipe I selected uses beer in two separate stages:

- First, it’s used for a brine, in which the chicken soaks overnight.

- Next, another beer is used to baste the chicken while it roasts.

Dr. Barth illuminated the logic here, pointing out that the alcohol plays a chemical role in the brining solution. Water and fat don’t mix, but fat and alcohol do. The alcohol is able to penetrate inside the fat-rich meat and carry flavors of the brining solution along with it. Because of its ability to break down fat, the addition of beer in the brine enhances the flavors of the dish in ways that water alone wouldn’t.

When it comes to alcohol and proteins, the reaction depends on the presence of water. If you were to crack a raw egg into a cup of Everclear, you’d notice that over the course of a few minutes, the egg would start to solidify. (I do not recommend eating such an egg.) This is because alcohol can precipitate proteins, effectively cooking them.

According to Dr. Barth, for this to happen the alcohol needs to be present at a high level. The reaction that occurs is effectively bonding molecules together and eliminating water. Any water present will work against the reaction and mitigate the effects. In the case of my brine, the large amount of water will stop the alcohol from cooking the chicken during its soak (as the water is stopping the alcohol from unfolding the proteins).

After our talk, I was downright excited. I loved the idea of using alcohol to roast up a chicken that was infused to its core with the flavors of sage, thyme, and beer.

The recipe itself simply called for a lager. The term lager refers to a large category of beers, ranging from barely there brews like light Bud Light, to intensely rich and bitter bock beers. Dr. Barth cautioned that the natural bitterness of beer, caused by hops, would be enhanced by the cooking process. He suggested matching the intensity of the beer to the intensity of the food. Following this logic, a Coors might be a good pairing for a Saltine, while a Dunkel beer would be better suited for a beef stew.

On a scale of cracker to pot roast, I decided my roasted chicken would be exactly in the middle, so I set out to find a lager to suit those needs. At the store, I selected a pilsner with a label that described it as “easy to slam, yet full of real flavor and all the things you yearn for.” It’s not the exact wording I would have chosen, but this sentiment describes the intensity of a roasted chicken perfectly.

At home, I got to work on my chicken.

The first thing to do was prepare the brine by bringing sugar, salt, and water to a boil.

Once the sugar is dissolved in the water, the mixture comes off the heat.

Then, put in a bunch of herbs and various relatives of onions (alliums, if you’re fancy). In this case, the recipe calls for leeks, shallots, and garlic.

The beer doesn’t enter the picture until the brine has fully cooled. This difference may seem subtle, but it’s crucial for flavor.

You’ve probably heard that foods prepared with wine or beer don’t actually contain alcohol, because the alcohol cooks off in the process. Alcohol has a boiling point of 173 degrees Fahrenheit, considerably lower than water’s boiling point of 212 degrees F. That means that above 173 degrees F, the alcohol in your dish will start to evaporate. In the case of this brine, the alcohol has some important work to do. Adding beer after the mixture has cooled ensures that the alcohol will be able to bond with the herb flavors and usher them into the center of the meat during the chicken’s overnight bath. The first beer is for the brine, which is all about seasoning the chicken.

The second beer is more about adding in the flavors of the brew itself. This beer is added directly to a roasting pan, along with the chicken and some vegetables. During an hour and a half in the oven, the recipe calls for basting the bird with beer four times. This gives the chicken a second chance to absorb some of the flavors in the beer, although Dr. Barth mentions that the longer the cooking time, the more opportunity for volatile flavor compounds to evaporate along with alcohol.

Some of the more subtle beer flavors will be hard to detect if your chicken cooks for a long time, but less volatile tastes, like maltiness, might still be present in the final dish.

As for the vegetables, Dr. Barth notes that even they have some fat, so the alcohol will be able to permeate the potatoes and Brussels sprouts as well.

Before the chicken heads to the oven, I dry it off as much as possible with paper towels. Here, it’s worth mentioning that beer is mostly water. Perhaps the most notable piece of chicken cooking news in the past several years involved The New Yorker’s Helen Rosner and a hair dryer. In this (accidentally) viral moment, Rosner used her Dyson hair dryer to completely dehydrate a chicken’s skin before roasting. True dehydration is the best way to get crispy chicken skin.

Basting a chicken with watery beer will not yield a bird with a cracker-like shattering skin. That being said, it’s all about priorities. By brining and basting a chicken with beer, you’re prioritizing meat that’s flavored to the core over skin that cracks when you bite it.

After the long roast, the bird was a thing of beauty.

Thanks to the beer brine, the meat was juicy and flavorful throughout. Even the breast, generally the dullest part of a chicken, was deliciously salty and herbaceous.

The skin, although not breakably crisp, had a beautiful golden color. Underpinning the sage flavor was a distinct malty note.

For an even stronger beer flavor, Dr. Bath suggests introducing the beer later in the cooking process.

Overall, by working with the beer in two steps, the recipe was able to take advantage of the chemical abilities of alcohol and the flavor compounds of the pilsner.

All the flavors you crave, indeed.