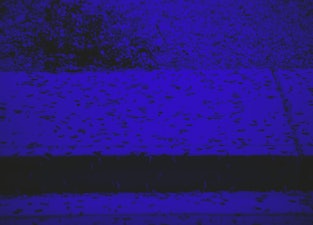 million grasshoppers descended on Sin City in a "Biblical plague"

In the summer of 2019, an immense swarm of tens of millions of grasshoppers descended on Las Vegas’s tourist strip, resembling a plague of near-biblical proportions.

At the swarm’s peak on July 27, approximately 45.8 million insects — clocking in at a whopping 30.2 metric tons — were hovering over the city.

The temporarily massive deluge of insects perplexed Sin City residents, but according to a study published Wednesday in the journal Biology Letters, scientists have identified one illuminating reason for the swarm’s strange appearance.

What’s new — The insects seemed particularly drawn to a spotlight beaming from the top of the iconic, pyramid-shaped Luxor hotel on the Las Vegas Strip.

This led to speculation that bright city lights — specifically, UV lights — were to blame for the insect plague.

The newly-published research confirms the reporters’ suspicions. The insects demonstrated a “daily pull” toward the city’s famously bright night lights, which served as a “sink” that attracted the massive insect throngs.

While other studies have focused on the impact of local light sources on insect populations less than one kilometer away, this is the first such study to explore a very bright light source — known as “skyglow” — that attracts insects from distances farther away.

This is one of the first studies to grasp how human-produced (anthropogenic) lights can dramatically alter the behavior of insects on a mass scale. The researchers write: “We document for the first time that anthropogenic light acts as a macroscale attractive sink for nocturnal insects.”

An NBC News video documenting the swarm of grasshoppers over Las Vegas.

How they did it — The researchers deployed radar technology — typically used in weather surveillance — to track the aerial movements of the grasshoppers from vegetated areas during the day to well-lit areas at night.

Scientists have increasingly used weather surveillance radar to track the migratory patterns of birds and insects, according to the study.

Using this technology, researchers were able to generate images of the total mass of grasshoppers around Las Vegas (referred to in the paper as their biomass), depending on whether it was day or night.

Digging into the details — The researchers found that the insects were most likely to migrate at night, “when artificial light may constitute a nocturnal attractive cue.”

The New York Times reported that the grasshoppers came from possibly as far away as Arizona during an unusually wet season in the region, which led to the swarming behavior. The Las Vegas lights then acted as a beacon.

Grasshoppers rose high into the sky and took off for the city shortly after sunset, reaching peak mass over Las Vegas at midnight.

Why it matters — Las Vegas, the researchers write, is “unrivaled as a nighttime light source.”

Due to the bright lights on its tourist strip, the city contains more radiance per unit area than any other metropolitan area in the U.S.

However, growing light pollution has harmed insects — and humans — all over the world. Light pollution creates excessive or unwanted light, which makes it difficult for us to see the night sky in well-lit, urban areas. Emerging research is also showing that the effect may be affecting animals like migrating birds and even plants, which rely on sunlight for photosynthesis.

But light pollution also significantly disrupts the behavior of insects. A 2017 study found a startling 75 percent decline in the biomass of flying insects over a 27-year period in Germany, with light pollution listed as a contributing factor. Recent research corroborated that light pollution may be partly to blame for the insect apocalypse, as some insect populations are declining at a rate of 1 to 2 percent each year.

What’s next — Despite the study’s intriguing findings, there are still a few things that scientists struggle to understand. For example, why did the grasshoppers form such a large swarm?

Under one hypothesis, researchers speculate that the positive response of some grasshoppers to nocturnal lights strengthens the behavior of other grasshoppers, creating a positive feedback loop, and resulting in dense throngs of insects like those that invaded Las Vegas.

This sort of group swarming behavior may have also been behind the migratory hordes of locusts that dominated the Horn of Africa and swept headlines in 2020.

The researchers also suspect that atmospheric conditions and weather patterns may play a role in whether swarms of insects congregate around nocturnal lighting. However, further research will be required to determine the long-term impact of nocturnal light pollution on the grasshopper’s evolution and survival as a species.

Ultimately, only time will tell whether the 2019 swarm was a one-off event limited to the bright lights of Sin City, or whether growing urban centers — and their accompanying lights — will draw more hordes of insects to cities around the globe.

Abstract: The anthropogenic environmental change affects organisms by exposing them to enhanced sensory stimuli that can elicit novel behavioural responses. A pervasive feature of the built environment is artificial nocturnal lighting, and brightly lit urban areas can influence organism abundance, distribution and community structure within proximate landscapes. In some cases, the attractive or disorienting effect of artificial light at night can draw animals into highly unfavourable habitats, acting as a macroscale attractive ecological sink. Despite their significance for animal ecology, identifying cases of these phenomena and determining their effective scales and the number of organisms impacted remains challenging. Using an integrated set of remote-sensing observations, we quantify the effect of a large-scale attractive sink on nocturnal flights of an outbreak insect population in Las Vegas, USA. At the peak of the outbreak, over 45 million grasshoppers took flight across the region, with the greatest numbers concentrating overhigh intensity city lighting. Patterns of dusk ascent from vegetated habitat toward urban areas suggest a daily pull toward a time-varying nocturnal attractive sink. The strength of this attractor varies with grasshopper density. These observations provide the first macroscale characterization of the effects of nocturnal urban lighting on the behaviour of regional insect populations and demonstrate the link between insect perception of the built environment and resulting changes in spatial and movement ecology. As human-induced environmental change continues to affect insect populations, understanding the impacts of nocturnal light on insect behaviour and fitness will be vital to developing robust large-scale management and conservation strategies.