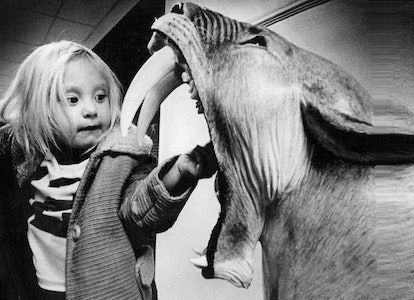 Saber-tooth tigers are right up alongside woolly mammoths as one of the Ice Age's most popular megafauna. With butcher knife-like teeth hanging from their jaws ready to tear apart their prey, these tigers have a reputation as one of the most fearsome carnivores to ever share the Earth with ancient humans.

But new research published this March in the journal Alcheringa showed these animals may have been even larger and more intimidating than science had initially believed.

The findings all stem from the discovery of a new Smilodon populator skull, already the largest known member of the saber-tooth family, in Uruguay.

Smilodon populator lived between one million and 10,000 years ago — coinciding with the proliferation of ancient human species, including our own, across the globe. Aldo Manzuetti, a doctoral student in Paleontology at Uruguay's University of the Republic and author on the study, told Inverse a the time these big cats would have had a threatening presence, with muscular bodies, "massive forelimbs and a short tail."

From this updated skull length measurement alone, Manzuetti and colleagues were able to determine a new estimated total weight for this big cat: an impressive 436 kilograms, which is equivalent to the weight of a grand piano.

For reference, modern-day male tigers' skulls are similar in length, averaging around 35 centimeters. But the differing physiology of the modern tiger with its Ice Age counterpart means Smilodon populator was far larger than the big cat today. A modern tiger weighs up to 300 kilograms.

See also: How the extinction of ice age mammals may have forced us to invent civilization

But with these new findings, the team believes their jaw power may have actually been 3 times stronger than that estimate, and the saber-tooth could have handled prey up to 3 tons in weight. If true, then the saber-tooth deserves its reputation (and then some) as one of the Ice Age's "apex predators," Manzuetti says.

But despite the compelling fossil evidence, paleontologists aren't ready to rewrite the Smilodon populator's history just yet. First, they need to find other, similar samples make sure this saber-tooth wasn't a freak of nature and actually a reflection of the species as a whole.

"Was [this Smilodon] forming part of a whole population of huge Smilodon populators?” Manzuetti wonders. "These questions are difficult to explain with only this material, thus it could be that we may not understand the overall ecological impact of this large-bodied predator on the faunas of the past.”

INVERSE IS COUNTING DOWN THE 20 STORIES THAT MADE US SAY 'WTF' IN 2020. THIS IS NUMBER 11. Read the original article here.