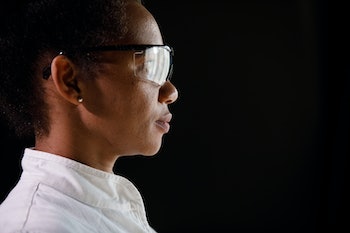 Gender and racial discrimination does not spare higher institutions of learning.

But for any science enthusiast from a marginalized background who wonders whether or not to pursue a STEM career, quantitative sociologist Yasmiyn Irizarry offers some wisdom.

“Life is just a little bit easier when we’re doing what we love,” Irizarry tells Inverse.

Irizarry is an African and African Diaspora Studies professor at the University of Texas at Austin and belongs to the Cite Black Women collective created in 2017 by social anthropologist Christen Smith. This organization seeks to bring attention to how often intellectual contributions by Black women go unacknowledged and are effectively erased in citational indices.

Last week, the collective appeared as an organization for change in a paper published October 6 in the journal Nature Physics. The study found that, in 1.07 million physics papers published from 1995 to 2020 across 35 physics journals, male-sounding names were widely over-cited, and female-sounding names were severely under-cited. This paper is just the latest look at what structural gender bias looks like in academia. The authors note that this experience is compounded when a woman is a racial minority.

Barriers often come at the cost of something more important than professional accolades: time and health.

“Citation inequity is especially strong for citing papers within the broad category of ‘general’ physics,” they write, adding that male names are cited more often as a reference for a topic outside the author’s expertise. They found that the imbalanced citational behavior of male authors remained “stable over time,” too.

The 2022 study authors note the “unfortunate irony” that gender-bias research is viewed less favorably by men faculty in STEM, all the while “that bias tends to be preferentially perpetuated by those who think it is not happening.”

“Each individual act of ignoring women’s scientific achievements might be consciously or subconsciously performed and may seem limited in effect on its own,” they write. “However, small acts of bias have been shown to demonstrably and cumulatively harm members of structurally oppressed groups.”

Lisa M.P. Muñoz, the author of a forthcoming book about equity in science by Columbia University Press, has chronicled experiences and investigations to develop an in-depth look at academic discrimination. Upon researching the number of studies that have been done on bias, including those mentioned in this article, Muñoz has taken the position that any person who rationalizes their bias as a personal preference is donning a “thinly-veiled disguise” because the body of work is, at this point, too large to unwilfully ignore.

Gender disparities have appeared again and again across different fields of science. And these setbacks disproportionately affect women of color. Civil rights scholar and Columbia Law School professor Kimberlé Crenshaw coined the term “intersectionality” to describe this phenomenon in 1989, and created it specifically to describe the experiences of Black women.

The intersection of race and gender is something that deserves more attention, Irizarry says. And the authors of the Nature Physics paper would agree. “Under-attribution, bias, and discrimination are faced by individuals of many — and intersecting — identities,” they write. “Future work would do well to unpack citation practices not just along the (cisgender) man/woman binary, but also along other dimensions of difference including race, ethnicity, class, sexual orientation, and disability.”

Gender bias is well-documented and sometimes disguised as “warmth”

Two years ago, one of the authors of the new study — physicist Dani Bassett at the University of Pennsylvania — was part of a team that used a probabilistic algorithm to assign genders to the first and last authors of more than 54,000 papers from five neuroscience journals since 1995. This approach, which served as the backbone of the new study, found that papers with male first and last authors (man/man) were cited 11 percent more than expected if gender were unrelated to referencing, and women first and last authors were cited 30 percent less than expected. This was “mostly driven by the citation practice of man/man author teams” and was found to be “increasing over time” even as the field diversifies.

In a 2012 study in the journal Proceedings of the National Academy of Sciences (PNAS), social psychologist Corinne A. Moss-Racusin showed that student gender was a significant factor in how faculty responded overall to a resume. Participants rated the resume belonging to a woman-sounding name as less competent, less hireable, offered less career mentoring, and a lower salary than an identical resume with a man-sounding name.

“It is noteworthy that female faculty members were just as likely as their male colleagues to favor the male student,” the 2012 study authors wrote. “The fact that faculty members’ bias was independent of their gender, scientific discipline, age, and tenure status suggests that it is likely unintentional, generated from widespread cultural stereotypes rather than a conscious intention to harm women.” But faculty participants reported liking the woman-sounding name applicant more than the other, and even expressed warmth. The “subtle” bias is filled with social fluff, in other words, that doesn’t manifest in tangible improvements to a prospective scientist’s career and salary.

A 2017 study in Nature found that, in journals for the American Geophysical Union, men authors were less likely to suggest women as reviewers for publications. Some journals have worked to find solutions to this. The journal Elsevier has made public statements against unconscious bias.

The intersection of race and gender bias

Moss-Racusin’s work has been reproduced a number of times, Muñoz says. And some studies show evidence of simultaneous gender and racial discrimination in STEM.

A 2019 study in the journal Sex Roles found that physics faculty “rated Asian and White candidates as more competent and hirable than Black and Latinx candidates.” It also noted a discrimination intersection. “An interaction between candidate gender and race emerged for those in physics,” wrote the study authors, “whereby Black women and Latinx women and men candidates were rated the lowest in hire-ability compared to all others.”

To use cosmology as an allegory, like supernovas whose red-shifted light revealed that the Universe was accelerating its expansion, a plethora of existing papers have been beacons attempting to illuminate the pervasive discrimination bias in STEM.

An April 2020 study in PNAS, called “The Diversity–Innovation Paradox in Science,” found that underrepresented students innovated at higher rates than the majority of students. “But their novel contributions are discounted and less likely to earn them academic positions,” the study states. This finding comes after a team analyzed nearly all U.S. Ph.D. recipients and their dissertations across 38 years, from 1977 to 2015.

Barriers often come at the cost of something more important than professional accolades: time and health. “People have to put in more labor” to meet milestones and standards, explains Irizarry.

This, too, has been documented. Bridget Goosby, sociologist and co-director of the Life in Frequencies Health Disparities (LifeHD) Research Lab at the University of Texas at Austin, has previously found evidence that Black women academics suffer poorer health outcomes. And in July 2022, Goosby received a new grant to continue her investigations alongside Rachelle Winkle-Wagner, former Race, Ethnicity, and Indigeneity Fellow at the University of Wisconsin-Madison. Winkle-Wagner states in the July 2022 grant announcement that “the goal is that one day we can use the team’s findings from this project to help inform future policy and practice related to equity and retention of Black scholars nationally.”

“bias tends to be preferentially perpetuated by those who think it is not happening.”

This is particularly ironic in a field like physics, the focus demographic of the new study. The frontiers of physics deal with intangible phenomena, like dark energy and the expansion of the Universe. But perhaps these pursuits of fallible humans to find a true sense of the world are limited, contained just to theories that, for instance, define the tension that might rip apart space-time, and yet fall short of seeing the existence of implicit bias and acknowledging its very-real effects on minority scientists.

To use cosmology as an allegory, like supernovas whose red-shifted light revealed that the Universe was accelerating its expansion, a plethora of existing papers have been beacons attempting to illuminate the pervasive discrimination bias in STEM.

And science is, if nothing else, a communal effort. Despite the admiration for Nobel Prizes and singular geniuses in the popular science lexicon, science should be a collective endeavor. Scholars, especially those at the intersection of marginalized race and gender identities, strive to bring equity to the pursuits they love.