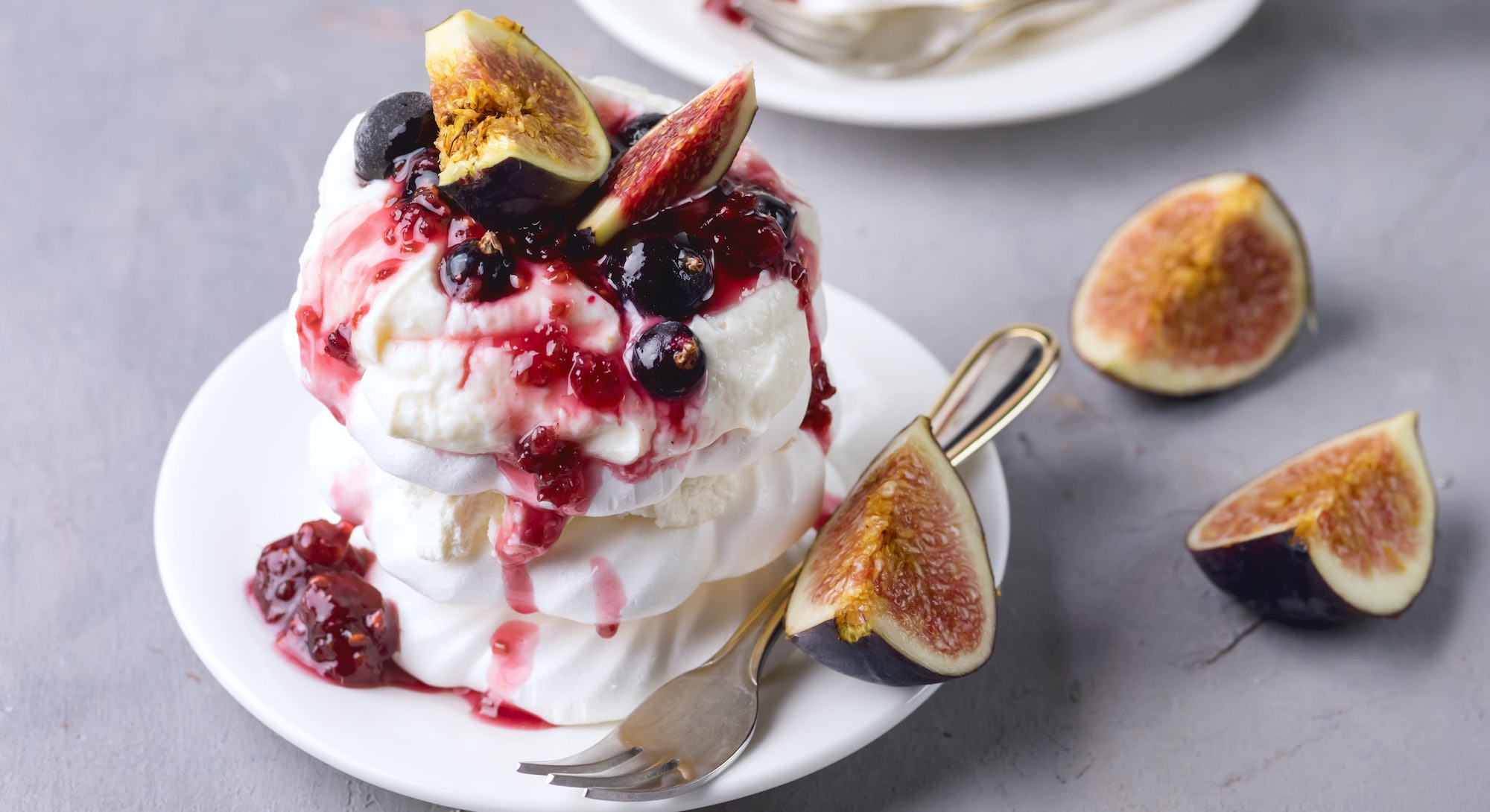 “The Incredible, Edible Egg” is a marketing slogan that was invented in 1976. In my opinion, it’s a very good one.

This seemingly simple food is remarkably versatile. Eggs can create dishes as light as air and as rich as pure butter. Eggs are the key ingredient that makes angel food cake light, custards creamy, and meatballs moist.

This versatility is what makes eggs unique, according to Dr. Kantha Shelke. A lecturer at Johns Hopkins and the founder of Corvus Blue, a food science firm.

Chemically speaking, egg whites and egg yolks are quite different.

This difference in their composition “results in distinctly different properties, taste, and nutritional attributes," says the food scientist and author.

Armed with my newfound knowledge, I wanted to make something that capitalizes on the unique properties of eggs. That meant exploring both ends of the extremes: light and fluffy, and rich and decadent. Enter: the pavlova.

Pavlovas are a decidedly retro dessert named after a Russian ballerina. They consist of a large meringue base and a topping. The topping can be anything, but it’s usually some type of fruit and whipped cream.

“It all starts with four eggs.”

The pavlova called to me because meringues are difficult to dupe. They’re made from egg whites and not much else. Sugar and vanilla can be added for flavor, but the unique texture relies on the chemical properties of egg whites. Yes, they can sort of be replicated with bean water (or aquafaba, but I prefer to call it what it is), but the texture and flavor of this substitute truly can’t compare.

Though they’re made from egg whites, meringues are mostly air. Dr. Shelke describes the finished product as “bubbles trapped in a scaffolding of egg white proteins.” This structure is formed by whipping egg whites and sugar until they balloon up into a pillowy mass. In an egg white, some of the proteins attract water and some repel them. When the whites are vigorously whipped, air is forced in, and the entanglement of proteins separates. Dr. Shelke explains, “the water-loving proteins cling onto the water, while the water-repelling proteins cling onto the air bubbles.”

Forming the meringue base is the first step of making my pavlova. It all starts with four eggs. Meringues use only the egg whites, so I separate the yolks by cracking each egg and passing it back and forth between the halves of the shell. This allows the white to drip away while the yolk is cradled in the shell. I do this with some caution. Even the tiniest drop of yolk would break down the bubbly light structure I want to form. Throwing fat into the mix would draw all the proteins together so that they would be unable to cling to the air in the same way.

After my eggs are separated, I set the yolks aside. At this point, you could feed them to the dog or throw them out, but I have bigger plans. I want to use yolks for their thickening power to create a creamy topping for my pavlova. The dog is disappointed.

I am blessed with a stand mixer. In theory, it’s possible to whip a meringue without one, but it would require one very strong arm. A stand mixer speeds this process up considerably, allowing the chef to cook without breaking a sweat. The best way to measure the progress of your egg whites is with observation. After whipping for a few minutes, the whites will be full of big bubbles. This means that the proteins are beginning to inflate and capture air. Keep whipping past this point, and the mixture will expand and fill up the bowl. The bubbles will appear finer and silkier as the whites incorporate more and more air. In recipes, the firmness of meringues is often described in terms of peaks. Turn the mixer off and raise the whisk out of it. The trail of meringue that follows it is the peak. If the trail of meringue breaks and flops over, that’s a soft peak. If the meringue breaks and stands straight up, that’s a stiff peak. Even if you’re looking for stiff peaks, don’t walk away from the mixer; it’s possible to whip too much. Dr. Shelke cautions, “If whipping continues, the foamy structure cannot hold the additional air and will collapse,” separating into foam and water.

I whip my meringue until it is stiff and glossy. Then, I gently plop it onto a piece of parchment paper, and slide it into a low oven. Meringues don’t need to bake so much as they need to dry out. After drying in the oven for a few hours, a large meringue like this will have a crunchy exterior and a marshmallowy interior. Even though it’s big, it will be shockingly light. The only weight comes from the added sugar and remaining water. Dr. Shelke estimates that a meringue is 80% air.

While my meringue is drying, I turn my attention to the egg yolks. Packed with protein and fat, egg yolks are the star of luscious sauces, rich puddings, and golden brown pastries. I want to use their thickening power to enhance my pavlova with an orange curd. The base of the curd is just orange juice, orange zest, sugar, and egg yolks. To activate the egg yolks, I set up a double boiler and stir the ingredients together. As the mixture slowly heats, the proteins in the yolks start to denature. According to Dr. Shelke, egg yolks thicken a mixture when the protein strands unfold. When the strands reach out to connect to other proteins, they trap moisture and tie the whole mixture together. After about 10 minutes of stirring, I can see this taking place. The curd base is no longer watery. When I dip a spoon in, it comes out slicked in a glossy orange coat. I take the bowl off the heat, stir in butter, and set it aside.

Rushing in the kitchen is rarely rewarded. The meringue will become lighter as it dries out completely. The orange curd will continue to thicken as it chills. I clean the kitchen and take the dog for a stroll around the block.

Once it’s at room temperature, I peel the parchment off of the meringue and marvel at its lightness. For some reason I have a cake stand, and this seems like the moment for it to shine. I perch the meringue atop the stand and give it a good smack with a wooden spoon. The hard outer crust shatters, showing off the pillowy inside. I layer whipped cream, orange curd, figs, and plums into the meringue cavity.

Slicing into the pavlova is a celebration of the power of eggs. The meringue is as light as a feather, and the curd, bolstered by egg yolks, is silky smooth. Incredible, indeed.