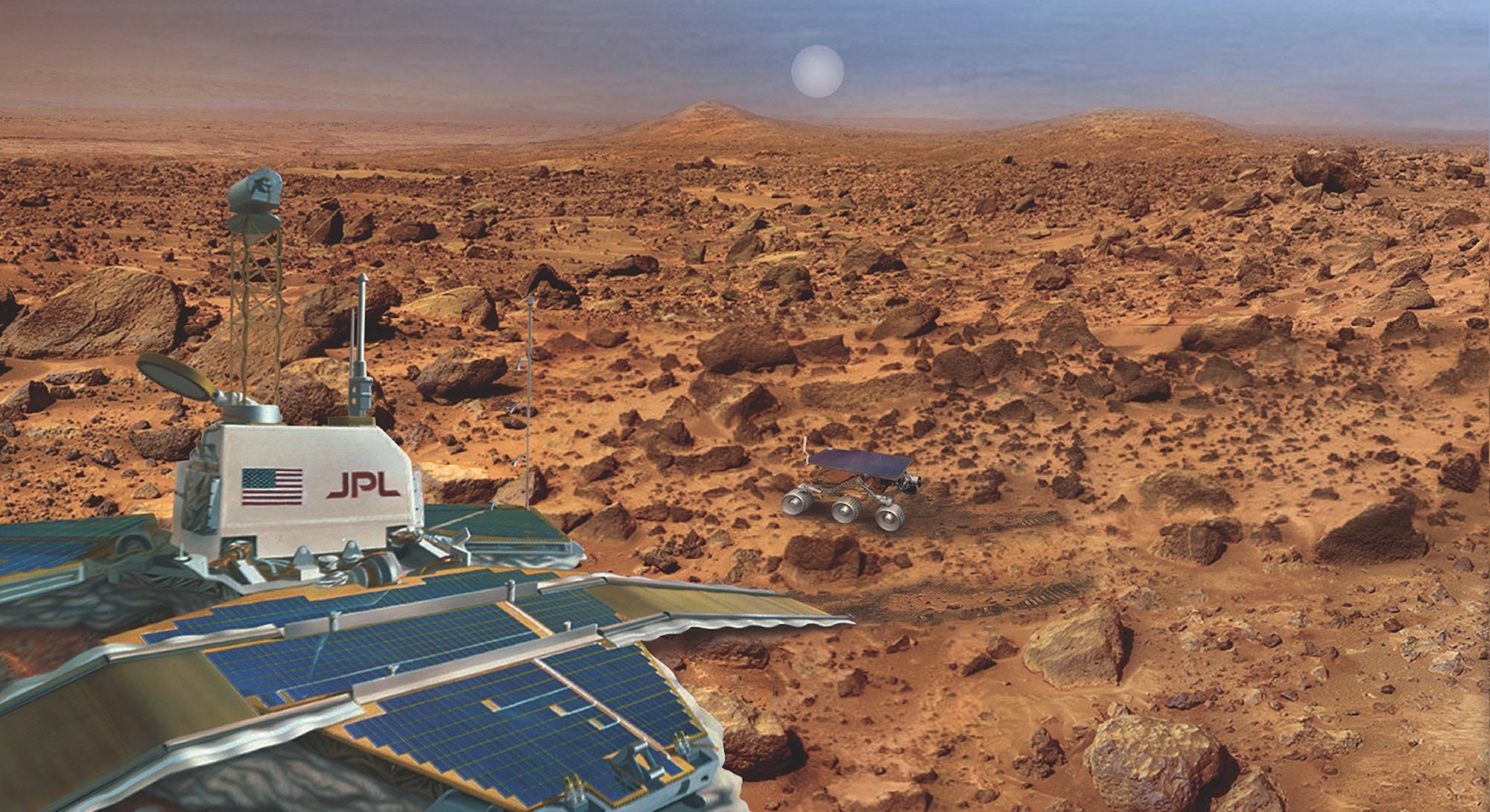 Twenty-five years ago on July 4, 1997, NASA landed its first rover on Mars and beamed back a photo from the planet’s surface. In doing so, the agency set up its first on-the-go, vehicular science lab on another world, able to visit more than one place in the course of its mission.

The almost 10-month Pathfinder mission and the 83-day journey of its accompanying Sojourner rover set the stage for the fleet of wheeled interplanetary explorers to follow — including the two rovers still active on the Red Planet: Curiosity and Perseverance.

As NASA’s Pathfinder spacecraft soared through the Martian atmosphere on July 4, 1997, a young, ambitious, and scrappy team of scientists in California anxiously watched the data pouring into mission control’s computers. They were together responsible for what was NASA’s hardiest lander and its first-ever Martian rover.

It took three years to put together, but now it was showtime. In its descent, Pathfinder careened right at the Red Planet. It had no brakes, slicing through the thin Martian atmosphere at seven kilometers per second and heading for a hard stop on the surface within just five minutes.

“Pathfinder was without question the most robust lander we ever sent to Mars. The others had been afraid of rocks,” Matthew Golombek, the mission’s project scientist, tells Inverse.

The team kept up with the dramatic event by following along as the spacecraft executed more than a hundred commands, and together they waited for that most-important maneuver of all: The moment when a clever concoction of airbags would open and absorb the shock of their precious Earthling hardware as it smacked into the Martian dirt.

Pathfinder had to be tough.

To “get a taste of what the surface looks like” for further exploration of Mars, Golombek, a former geologist, knew they needed a microwave-sized robot that was able to actually scout out the ground. A traveling craft on Mars could help answer the major questions that its predecessor Viking, which landed on Mars in 1976, raised about the ancient history of the planet — a time when Mars may have hosted water.

But the surface reconnaissance images of the planet available in 1997 were blotchy rubble compared to the high-resolution views offered by our satellites around Mars today. Without a sure guide, Pathfinder risked landing on potentially hazardous rocks.

As fast as the descent began, however, the “mystifying moment” was over: Pathfinder — somehow — landed safely on Mars. The room erupted with joy and relief, Golombek recalls.

“Of course, everyone was cheering wildly,” Golombek says. He laughs, remembering the moment when guards and people from other divisions at NASA’s Jet Propulsion Laboratory streamed into the room to look at the pictures coming in from Mars.

Their fascination was merely a taste of what was to come.

“The public reaction was unprecedented. There can’t have ever been a more popular Mars mission than Pathfinder, because it had been 25 years since anybody had landed on the surface of Mars,” Golombek says.

Orbital pictures don’t convey the same feeling as a view from the ground, which offers humans a glimpse of Mars in much the same way we view our home on Earth — from the surface.

NASA spent $265 million on Pathfinder and its companion rover Sojourner. Adjusted for inflation, that is less than one-fifth of the price of each of the two most-recent NASA rovers, Curiosity and Perseverance.

When Dan Goldin began his tenure as NASA administrator in 1992, the space agency was in a much different place than it is today. In a 20th anniversary special about Pathfinder, Goldin describes the birth of the agency’s Discovery program as a need for projects that would be “faster, better, cheaper.” Pathfinder was the second project given the greenlight under this umbrella.

In 1992, NASA sent the Mars Observer to the Red Planet. But three days before its scheduled orbital insertion, NASA lost contact with the mission, likely due to a fuel leak. That set back NASA $803 million. Later, the Mars Global Surveyor launched on November 7, 1996 — a few weeks before Pathfinder — and entered orbit around Mars on September 11, 1997. Its price tag was a little north of $200 million.

During a conversation with Senator Fritz Hollings of South Carolina before Goldin’s confirmation in 1992, the two discussed the state of the space agency — there had been a series of recent and very expensive missteps.

NASA grounded the Space Shuttle program for two years following the 1986 Challenger tragedy and it had built Endeavour to replace it. The agency also launched the Hubble Space Telescope in 1990, but it needed repairs in space. The Galileo probe heading to Jupiter couldn’t deploy its high-gain antenna, hobbling its ability to send data back.

As Goldin tells it, Hollings insisted that if he wanted the job, he needed to keep a tight cap on the budget. And so Pathfinder, created primarily as a low-cost technology demonstration, was conceived.

(It is worth noting that after Pathfinder, NASA suffered two high-profile setbacks related to the “faster, better, cheaper” mantra. In 1999, the Mars Climate Orbiter misfired during an orbital insertion due to a mismatch in measurement units used (one system used metric, the other U.S. standard) while being built. Later that year, the Mars Polar Lander failed on its landing attempt, crashing into the South Pole of Mars.)

“I call myself the oldest Martian,” Golombek says, referring to the affectionate JPL term for those who exclusively study the Red Planet. He gained the status in 1992 when he joined the Pathfinder project.

As project scientist, it was Golombek’s job to fully realize the scientific aspects of the mission and communicate them to the engineering team.

They had many objectives. If Pathfinder survived the 34 million-mile journey to reach Mars, the team needed to perform an atmospheric entry move they had never attempted before. On the ground, the rover Sojourner would take images of the surface from far away and up close; its alpha proton X-ray spectrometer would analyze rock composition. It would take note of the Martian weather, and this would all set a baseline for future Mars exploration.

NASA had already sent a lander to Mars. But Vikings 1 and 2 couldn’t travel — they stayed put during their 5 and 2.8-year (respectively) missions. This made it harder to study interesting rocks, which Golombek says are the currency of any geologist. But a rover was also just an exciting prospect to “break the ice,” he says, bolstering future space exploration and enhancing how we perceive other planets.

“It was the beginning of a Mars Renaissance,” Golombek says.

Pathfinder and Sojourner returned more than 12,500 images from the planet’s surface, conducted more than a dozen chemical analyses of Martian soil, and found evidence that supported Viking’s findings that water may have once flowed on Mars’ surface. The spacecraft observed dust devils, too.

The iconic rust-colored dirt of Mars is now home to several active NASA missions, set into motion by Pathfinder’s landing 25 years ago.

“Since Pathfinder, there’s been basically a mission to Mars almost every opportunity,” Golombek says.

“We have a flotilla of orbiters, we have three spacecraft, two rovers, and a lander on the surface,” Golombek says.

“I mean, we have a little community up there.”