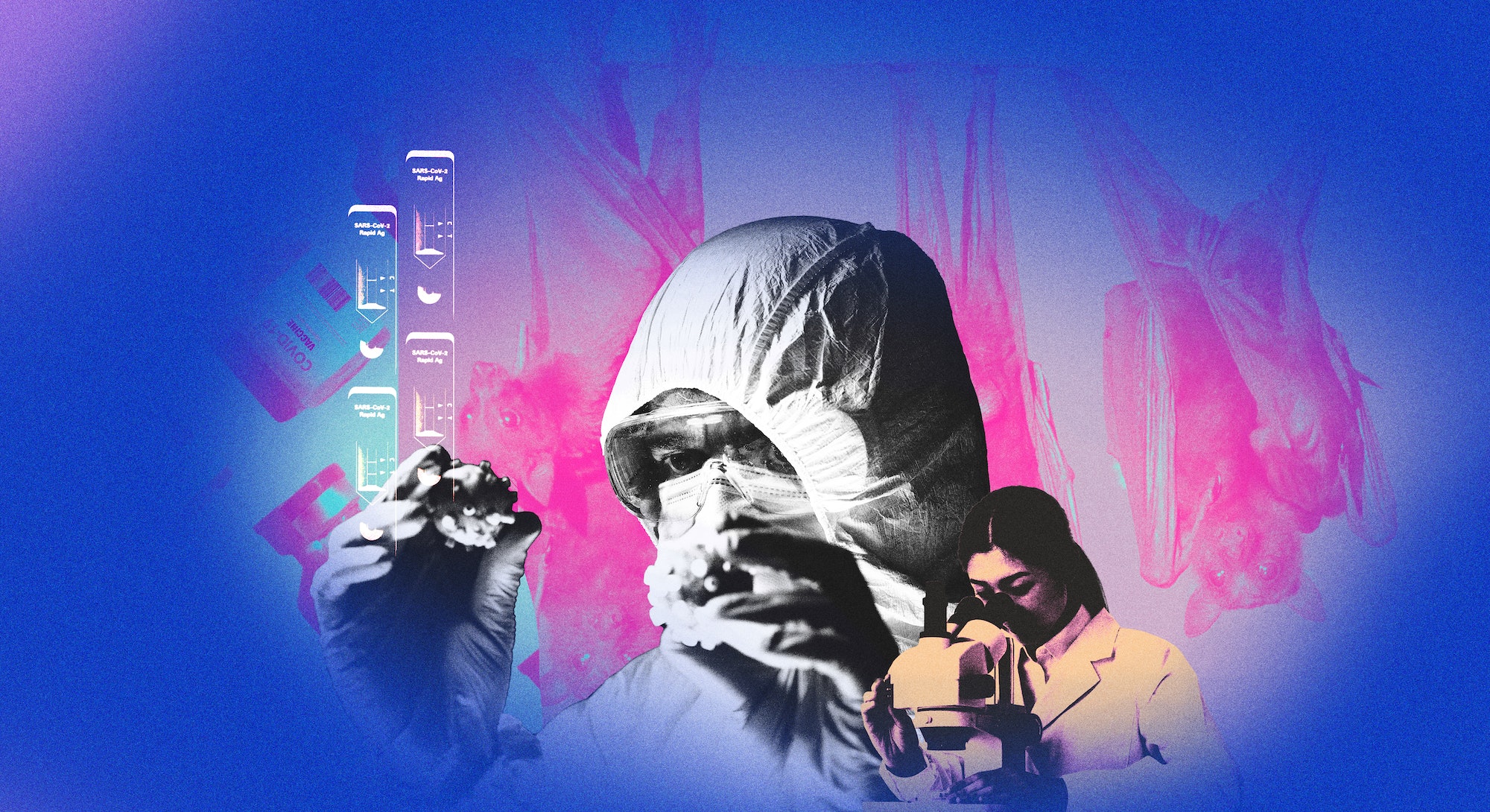 For contagious disease scientists, 2022 started off with a bang — and it wasn’t just the fresh wave of Omicron infections. It was a preliminary study on another coronavirus found in bats, called NeoCoV. This virus is related to the lethal but rare Middle East Respiratory Syndrome (MERS), which has killed more than a third of everyone infected.

In the paper, published in January on the online preprint server bioRxiv, the authors describe an experiment with the virus in the lab. NeoCoV seemed to be one mutation away from enabling a receptor on the virus's surface to infect human cells. How did they discover this mutation? They coaxed the virus into mutating — creating a version that could infect humans, with unknown consequences.

The paper was a grenade thrown headlong into epidemiology and virology. The ensuing firestorm of controversy is still uncontained.

“I view the work that the scientists have done as dangerous and irresponsible,” Stephen Luby, a professor of medicine specializing in infectious diseases at Stanford University, tells Inverse.

The problem, Luby and other critics say, is that by making a virus more transmissible or infectious to humans — as was done in this preprint paper — it is essentially “gain of function” research.

Luby defines “gain of function” as “anytime that you would alter [a virus] so that it increases the risk that an organism would present a greater epidemic and pandemic risk to humanity.”

This is the kind of research that was conducted at the Wuhan Institute of Virology before the current coronavirus pandemic. The “lab leak” theory of Covid-19’s seeming origin is debated and largely debunked by research, but for many scientists, this kind of research is taboo. (The research in the NeoCov preprint paper was also conducted in Wuhan.)

The reason why, as Luby’s concerns suggest, is that it’s hard to put worms back in the can.

Other scientists realize the potential danger, but also believe that “gain of function” studies could help save us from a future deadly outbreak.

“We have to start to monitor these viruses in these animals in a much more serious way,” Donald J. Alcendor tells Inverse. Alcendor is an adjunct associate professor of pathology, microbiology, and immunology at Vanderbilt University School of Medicine.

Though the January paper focuses on NeoCov, the research raises a bigger question: Can we predict and prevent other viruses in animals from infecting humans? And in turn, can we halt the next pandemic before it even begins? Scientists worldwide are racing to find out — and some are taking divergent and even risky paths to tackle the problem.

It’s hard to know which viruses will leap to humans or which may prove fatal — both are significant factors when planning to prevent a pandemic.

“There’s a growing list of animal viruses that have jumped species and have caused damage and disease in human populations,” William Schaffner, professor of preventive medicine in the Department of Health Policy at the Vanderbilt University School of Medicine, tells Inverse. And studies show that our continually warming climate causes animals to migrate to new habitats, often to areas where humans live, increasing the risk of a virus jumping from animals to humans.

The number of unknown viruses in bats, in particular, is something worth considering, Alcendor tells Inverse. While the exact origin animal of SARS-CoV-2 remains in dispute, one popular theory is that the virus originated in bats before jumping to a secondary host animal, which then infected humans.

A recent study published in Proceedings of the National Academy of Sciences found that bats harbor “exceptionally virulent” diseases but not necessarily the most lethal ones, suggesting that while bats are an important place to start looking, the nature of the virus itself — not only the animal transmitting it — will determine the severity of the disease to humans. And understanding when a virus will turn deadly can be nearly impossible.

With hundreds of thousands of viruses circulating in mammals right now, is such a proactive approach to finding them all before they hit humans feasible?

“What you’re asking is a huge question,” Tony Goldberg, a researcher at the University of Wisconsin-Madison who studies the evolution of infectious diseases, tells Inverse.

“There are some people — and we can call them the virus hunter camp — who believe that the best strategy is to discover all of the world’s viruses, or at least the viruses that could potentially affect us,” Goldberg says. This includes viruses in “mammals, birds, insects,” he adds.

These scientists think it may be possible to surveil and genetically sequence most potentially dangerous pathogens before they cross over from animals into humans. Some scientists, like Alcendor, are more concerned about understanding zoological transmission within the animals most likely to pass a virus to humans, like bats.

“Covid has taught us a very important lesson,” Alcendor says. “When I think about zoological transmission, we’re not doing enough.”

Better global coordination around routine genomic sequencing could give scientists a snapshot of the different viral variants circulating in a given community — and how they might spread.

“We have to develop a way to be able to see the evolution of these variants before they become out of control,” Alcendor says.

Some experts want to predict the emergence of potential pathogens the way we might forecast a tornado or a thunderstorm, using data to generate statistical models of viral emergence, Goldberg says, but he is skeptical it will work.

“That’s really hard because pathogens don’t all follow the same rules. Every pathogen has a unique ecology,” he explains. “We knew that coronaviruses are out there, and they were on everybody’s list of things that could emerge. But we didn’t make a useful prediction,” Goldberg says.

Using genetics to monitor dangerous pathogens brushes up with genetic manipulation. For example, in the controversial January 2022 paper about NeoCoV, the researchers tweaked the virus’s DNA to discover one mutation that might enable it to infect humans. But NeoCov might never mutate in that specific way, and even if it does, it still might not infect humans.

“For all we know, this virus has been out there in bats for eons. And it hasn’t been transmitted to humans in any way that we can tell has caused substantial illness,” virologist Schaffner says.

But Alcendor points out scientists might do well to heed these kinds of warning signals.

“A virus with the transmissibility of SARS but the fatality rate of MERS would be very difficult to contain,” Alcendor says. “This is a red flag.”

But as an infectious disease specialist and a critic of the NeoCoV paper, Luby says gain of function research poses a risk beyond a potential “lab leak” — that of “dangerous knowledge.” People with nefarious intentions could use that knowledge to create “synthetic pathogens” to cause harm, he says.

Other scientists are more equivocal:

Experts like Alcendor say it’s also worthwhile to monitor viruses not just in wild animals but in livestock and domesticated animals as well — China recently detected the first human case of H3N8 bird flu after a child came in contact with domestic chickens. The risk of the spread of this particular virus among humans is low, however.

“We need monitoring at home, not just in bats,” Alcendor says.

But with all the focus on potentially dangerous animals, it can be easy to forget the humans who live and work with them.

In a study published in February in Science, 20 public health officials, economists, and wildlife conservationists argued that the world must devote more funding to preventing animal diseases from becoming human pandemics. Using past zoonotic outbreaks as a blueprint, the researchers estimate that halving the risk of future pandemics would save 1.6 million lives annually and $10 trillion in costs (like the economic loss of productivity).

At least 6 million people worldwide have perished in the Covid-19 pandemic. In turn, Covid-19 is expected to cost the global economy $12.5 trillion by the end of 2024. The next pandemic could take a greater toll.

Much more money must go toward preventing pandemics as soon as possible, the authors argue. Specifically, they suggest:

“These primary pandemic prevention actions cost less than 1/20th the value of lives lost each year to emerging viral zoonoses and have substantial co-benefits,” write the researchers.

“Solving poverty would solve almost everything else.”

For instance, after the deadly Nipah virus first emerged in Southeast Asia in the 1990s and later in South Asia, scientists realized that one way the virus spread from bats to humans was date palm sap, which bats contaminate by licking — some of the people who died had consumed the contaminated sap days earlier.

Infectious disease expert Luby points out that people in this region enjoy drinking the sap — so it isn’t necessarily effective to restrict it to prevent infection.

Instead, researchers found that placing a bamboo skirt around the date palm trees often prevented bats from getting into the sap — a cost-effective solution to a lethal problem.

Focusing on simple practices to change human behavior could go a long way toward preventing a pandemic.

“It’s the One Health concept — you have to treat the animals, the environment, and the people to really solve this problem,” Barney Graham tells Inverse. Graham once served as deputy director of the National Institute of Allergy and Infectious Diseases Vaccine Research Center at the National Institutes of Health. He also played an instrumental role in bringing mRNA vaccines into being.

Applying the One Health approach to pandemic prevention would require reducing practices like deforestation and agricultural expansion, which harms the environment and raises the risk of viral spillover by bringing us into contact with animals carrying novel viruses. It would also provide people with viable and profitable alternatives to the wildlife trade.

“Solving poverty would solve almost everything else,” Graham says.

In some ways, scientists have already shown the benefits of predicting a pandemic with Covid-19. Coronaviruses are a known quantity thanks to the flu. Research into mRNA vaccines for known coronaviruses was well underway when Covid-19 emerged, and it was relatively easy to develop a vaccine for SARS-CoV-2.

“We were lucky with coronavirus,” Graham says. “We are not as well prepared for anything else.”

Before he left the NIH, Graham and his colleagues published a roadmap for a less-predictable viral outbreak: the Pandemic Preparedness Plan.

“We need research and development processes so that we can really get more basic information about all the different viruses with the capacity to infect humans,” Graham says.

“There’s always going to be some risk.”

Scientists have identified about 100 virus families so far. Of these, 26 have infected humans. The roadmap lays out a plan whereby a researcher could theoretically select a “prototype” virus representing the larger group. Then they can develop vaccines and treatments for the prototype that could broadly apply to other viruses in its family.

Parts 3 and 4 of the plan involve building the infrastructure to manufacture vaccines and deploy them worldwide.

A different tactic involves devoting more attention to viruses widespread in specific areas of the world — rift valley fever in Kenya or Lassa fever in Nigeria, for example — that could theoretically become a global pandemic, he says. Monkeypox, which has circulated in Africa for some time before spreading to other continents, is a timely case in point.

Richer nations could pay lower-income countries to help treat endemic diseases like these — and try to prevent them from arising in the first place. But at least in the United States, government funding for global Covid-19 aid is drying up while the virus remains rampant.

There’s another problem with the plan aside from money: The viruses it suits best are those already known to be in human populations and considered an immediate threat.

Goldberg compares the effort to trying to always prevent yourself from falling down the stairs.

“There’s always going to be some risk. The goal isn’t to prevent — the goal is to reduce the risk,” he says.