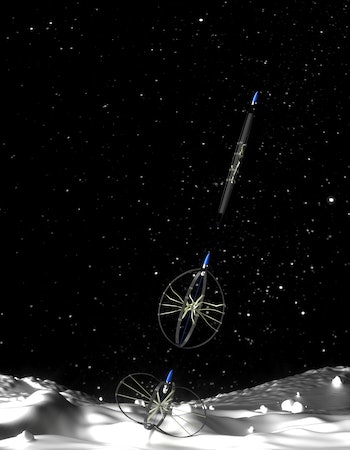 A new machine with jumping capabilities from the University of California, Santa Barbara doesn’t have an anthropomorphized form, but it can leap the highest that a robot — or living creature for that matter — has ever been able to. The team published the details on this tech jumper in the journal Nature last week.

Not only can this robot jump 30 meters in the air, but upon landing it can self-correct and launch yet again.

What’s new — Jumping robots are nothing new, but this one operates on a particular principle taken to the extreme. As a result, it can achieve massive heights, jumping 30 meters — almost 100 feet — in the air. The robot also has a simple, elegant design; at 30 centimeters tall, it resembles a model rocket.

“It's incredible to see something launch itself at almost 60 miles per hour,” Charles Xiao, a co-author and Ph.D. student at U.C.S.B. tells Inverse.

Jumping capabilities found in nature are called biological systems; humans and frogs are biological jumpers, though frogs are far more optimized than humans for jumping. Engineered jumpers, however, come from technical design and engineered systems.

The secret ingredient to this jumper is a principle called work multiplication. When a living creature, such as a human, jumps, the muscles contract and expend energy to launch the body off the ground all in one stroke. One brief burst of force propels the body, and then the rest is up to gravity. This jumper, however, instead of releasing one initial flash of force can disperse force over a longer period of time, so it climbs higher.

Xiao likens this difference to biking uphill. On an incline, biking becomes easier after shifting to a lower gear. There’s less force expended in each downward stroke of the pedals, but overall the same amount of energy helps the cyclist climb to the top. Energy is dispersed in smaller increments over a longer period of time.

Why it matters — The jumper operates with a motor and springs. In a human leg, think of muscle as the motor and tendons as the springs. While the motor revs up for an initial push of force, the springs store potential energy that can be released to further propel the jumper.

The spring density is the star of the show here. While the motor provides power, the spring exponentially increases the jumper’s capability.

This little guy clocks in at 30 grams. It’s made of a carbon fiber frame, rubber bands, a motor, and a small lithium-ion battery.

“We built this in the garage, basically, during the pandemic,” Xiao says. He details his experience building this jumper with his team in an article in Nature from earlier this month.

In fact, it’s possible to build this jumper at home, Xiao says. He invites other engineers to build robots that outdo his. “I encourage people to try to beat it,” he says. “You should build something comparable, and maybe even a little bit better.”

What’s next — Xiao hopes that the jumper’s next stop is another planet. This jumper could help survey extraterrestrial surfaces without all the bulk that comes with a rover. (No offense, Perseverance.) If this bot can leap almost 100 feet in the air on Earth, think of how it would fair on the Moon, where gravity is one-sixth that of our planet’s. What’s more, there’s no air resistance, which saps about 25 percent of energy out of a jump, according to Xiao.

Xiao also works on more grounded solutions, like smart roofing tiles that can alter heating and cooling properties in response to the environment. In hotter temperatures, the tile can reflect sunlight and emit greater amounts of infrared light. Infrared light, he says, passes through the atmosphere very easily into the cold void of outer space, so the void doesn’t reflect anything back to the light-radiating tiles. However, when it’s cold, the tiles absorb sunlight and emit very little infrared light, so they have an absorption effect rather than a radiative one.

These jumpers won’t be joining the battalion of robot dogs, Xiao predicts. He says they’re not made for surveillance or military applications on Earth because the necessary equipment is heavy, and these guys need to stay as light as possible.