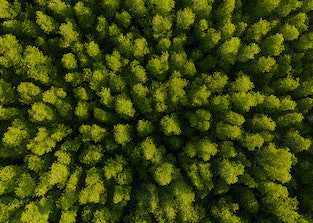 Earth may be home to 9,000 more tree species than we thought — most are undiscovered

Trees are the “lungs” of the Earth — leafy organisms that produce the oxygen we breathe in every day and cycle the carbon dioxide we breathe out. But despite trees’ vital importance to human survival, we know comparatively little about their diversity. In fact, according to new research, there may be thousands more tree species than we previously thought — and many of them are still unknown to science.

What’s new — In a study published Monday in the journal Proceedings of the National Academy of Sciences, scientists estimate there are approximately 73,000 species of trees globally — 14 percent more than researchers’ previous estimates.

Further, the scientists estimate that around 9,000 of these trees have yet to be discovered. The findings promise a new era of discovery here on Earth, but they also add impetus to the need for tree conservation and to tackle climate change.

“This study reminds us how little we know about our own planet and its biosphere,” Jingjing Liang, a co-author on the study from Purdue University and coordinator of the Global Forest Biodiversity Initiative, tells Inverse.

The researchers found that nearly half — some 43 percent — of Earth’s tree species are in South America. The rest are sprinkled throughout the world, with 22 percent in Eurasia, 16 percent in Africa, 15 percent in North America, and 11 percent in Oceania.

“We are excited to have come up with an estimate of the number of tree species that live on Earth and particularly jazzed that, kind of like magic, we could estimate not only the number of species already discovered but also the number that remain undiscovered,” Peter Reich, a co-author on the study and senior chair in forest ecology and tree physiology at the University of Minnesota, tells Inverse.

Digging into the details — South America, according to the new research, is likely home to more undiscovered tree species than any other continent on Earth. The scientists estimate that the region contains roughly 40 percent of tree species that are unknown to science.

Of all the tree species that exist on our planet, almost one-third of them are rare. In fact, South America contains an estimated 8,200 rare tree species, the highest of any region in the world.

The continent also has the highest percentage of tree species that are native to the area, at a whopping 49 percent.

Finally, the researchers found that the tropics are a particularly vital region for tree species: Somewhere between half and two-thirds of known tree species exist in tropical and subtropical areas.

Why it matters — All of this together should tell you that the biomes of South America are pretty darn important when it comes to global tree diversity. These results offer new reasons to conserve forests — especially tropical forests — in a region that is already established to be so critical to storing carbon and offsetting the climate crisis. Indeed, diversity is as vital as tree numbers to cycling carbon dioxide, the authors say.

“Tree species diversity improves the amounts of carbon capable of being sequestered by forests,” Liang says.

Forest conservation in South America should be a high priority, the researchers write.

The findings could also help us identify thousands of undiscovered tree species in hidden corners of the globe.

The discovery — Various research groups have attempted to assess the number and spread of tree species on Earth in the past, but a lack of available and consistent data across geographic regions made it harder.

To fix that problem, the new paper estimated the number of tree species on Earth on both a global and regional level using a far more extensive dataset. Specifically, they combined the Global Forest Biodiversity Initiative’s dataset with another index, the Treechange database on Earth’s tree species. They then used the current estimate of the abundance and presence of known species and plugged them into statistical estimators (including the Good-Turing method) to generate an approximation of the number of actual tree species in existence.

Put bluntly, these findings tell us that we are missing thousands of tree species from our global catalogs — a rich vein for future discovery.

What’s next — Liang and their team note that the study has its limitations. Notably, incomplete sampling in the dataset could mean there are yet more tree species on Earth not accounted for in the findings.

The researchers write that “as a scientific community, we still have much more work to do to arrive at accurate estimates regionally, continentally, or globally.”

Future research will hopefully fill in the data gap and help us conserve tree species — both known and unknown— that are of critical importance to our planet.

“There is so much more we need to learn about the Earth, so that we can better protect it, and conserve natural resources for future generations,” Liang says.

Abstract: One of the most fundamental questions in ecology is how many species inhabit the Earth. However, due to massive logistical and financial challenges and taxonomic difficulties connected to the species concept definition, the global numbers of species, including those of important and well-studied life forms such as trees, still remain largely unknown. Here, based on global ground sourceddata, we estimate the total tree species richness at global, continental, and biome levels. Our results indicate that there are ∼73,000 tree species globally, among which ∼9,000 tree species are yet to be discovered. Roughly 40% of undiscovered tree species are in South America. Moreover, almost one-third of all tree species to be discovered may be rare, with very low populations and limited spatial distribution (likely in remote tropical lowlands and mountains). These findings highlight the vulnerability of global forest biodiversity to anthropogenic changes in land use and climate, which disproportionately threaten rare species and thus, global tree richness.

More like this
Science
8.10.2022 3:27 PM
Climate change may push North America’s forests to a “tipping point”
By Tara Yarlagadda
Science
8.5.2022 6:00 PM
How is nature connected to well-being? It's complicated, scientists say
By Tara Yarlagadda
Science
7 hours ago
Watch squealing dolphins hunt fish and snakes from their point of view
By Jennifer Walter
Related Tags
Share: