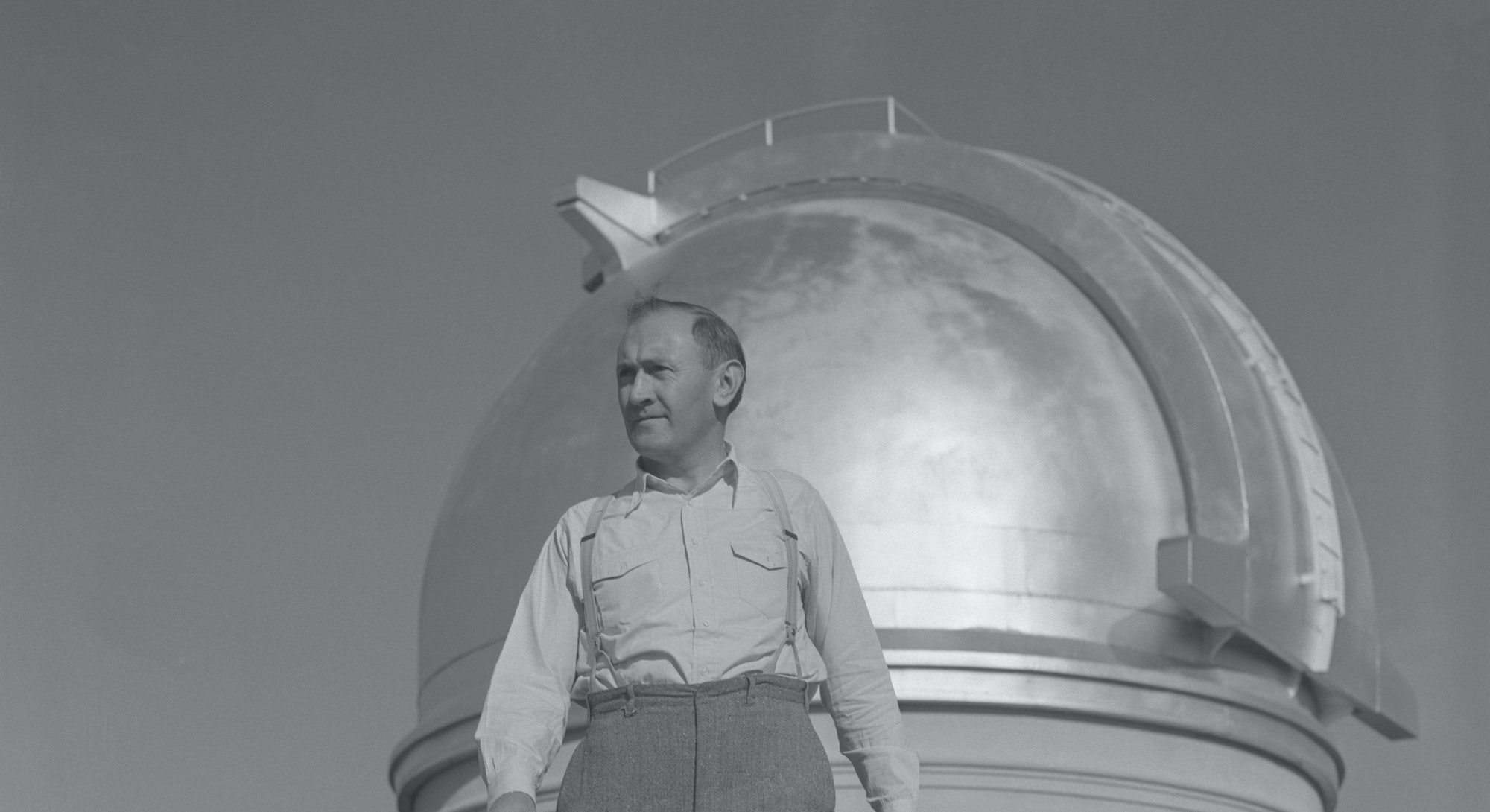 In the late 1950s, there was a nontrivial global effort, a race in fact, to be the first nation to send an object to Earth’s orbit. Sputnik 1, Earth’s first artificial satellite, was launched 65 years ago on October 4, 1957. It was a first heard that made headlines around the world.

But the first object of human origin to enter the Sun’s orbit was considerably more obscure — if the test, indeed, worked. The man who purportedly came up with the original idea for the experiment was also the man who first theorized dark matter and neutron stars, eccentric astronomer Fritz Zwicky.

Who was Fritz Zwicky?

Zwicky himself was quite a character, whose ideas on dark matter and other very real astrophysical phenomena contrasted with other unproven ideas like “nuclear goblins,” high energy phenomena he proposed exist within dense stars under extremely high pressures.

Jonathan McDowell, a researcher in astrophysics at the Harvard-Smithsonian Institute, tells Inverse that Zwicky “is one of the real characters of the history of astronomy.”

“He was the sort of an almost Trumpian figure — very blustery, very ‘look at me’ stuff, but really smart as well,” McDowell says. “So, he actually had some really good insights that kind of got ignored for a while just because people couldn't stand it.”

Zwicky, born in 1898 in Switzerland, came to the United States in 1925 to work at Caltech alongside many of the nation’s leading physicists. For example, one of his colleagues was Robert Oppenhiemer, widely considered the father of the atom bomb.

Zwicky’s first massive discovery, “dunkle Materie,” was the initial term he used to dub the invisible — hence, dark — matter that he measured in the Coma Cluster that was published in 1933. The galaxies in the cluster were moving too fast to stay a cohesive entity by standard measurements, but they remained tightly intertwined, implying an invisible gravitational force at work. This was only the beginning for Zwicky who continued researching well into the 1950s — and it took a while for people to accept his results.

“No one believed in it for a while,” McDowell says. “And then, decades later, Vera Rubin came along and found evidence for dark matter within galaxies. And people went back and looked at Zwicky’s stuff and said, ‘oh, yeah, that's consistent.’”

It was in the 1950s and 1960s that Zwicky shifted gears. One of his many projects included testing and studying what were ultimately called Zwicky pellets.

“The science behind it is so when you see a shooting star, what you're seeing is a grain of dust hitting the atmosphere at 60,000 miles an hour. It’s burning up. It's happily orbiting the sun,” McDowell says. “The Earth gets in the way. The bigger meteors are maybe you know, a few millimeters across or a few centimeters across even and you get these big fireballs.”

Zwicky was interested in being able to determine the properties of the meteors as they entered earth’s atmosphere depending on their optical properties.

“You can think of it as the meteor hitting the earth or the earth, hitting the meteor. Relativity says you can think about it either way. From our point of view, it's coming in from solar orbit and happens to hit the Earth,” McDowell says. “It goes so fast that the gravity of the Earth isn't really doing a lot of focusing; it's mainly that it just was in orbit around the sun, and we [Earth] happen to get in the way. That's what a shooting star is. One of the sorts of questions in the 1950s was about the actual size of these meteors. How much mass is in a shooting star from particular brightness?”

Zwicky wanted to study the dynamics of shooting stars, which are actually formed because they are in the Sun’s orbit and cross paths with Earth. So, he made some.

“The way that they decided to do that was to take a sphere of pure iron or a sphere of stone on a rocket and slam it down into the atmosphere, and see how bright it got when it burnt up. Even a four or five-milligram sphere of iron is bright,” McDowell says.

These rockets had to be going incredibly fast — quick enough to escape Earth’s sphere of influence. Finally, in order to recreate the conditions of a meteor, the upper stage of a multi-phase rocket would point down instead of up, releasing the pellets back down toward Earth. After a number of false starts, Zwicky’s experiment launched on October 16, 1957, atop an Aerobee sounding rocket.

“Then there was a particular experiment in 1957 on the final stage of the rocket. They used an explosive, accelerating fragments to very high speeds, some of which go down and some of which go up. Zwicky's claim was that the explosion accelerated the pieces of the test particle too,” McDowell says. “So when we had these test particles that got accelerated by the explosive, some of them will go down and be artificial meteors, and some of them will go up and they will be going so fast that they would have escape velocity [11.2 km/s],” meaning that they would travel beyond the Earth-Moon system.

While Zwicky made these artificial meteors famous, it was likely not his pellets that made it into interplanetary space.

“Zwicky was not the only person with a payload on this rocket doing a similar thing. It was with this guy called Poulter and a guy called Reinhardt. They all had their payloads in this particular little rocket. The reason we associate this Zwicky with this is that this Zwicky was a showman,” McDowell says. “So everyone is talking about these Zwicky pellets. Whereas in fact, from my analysis, I think if anything got to high velocity, it was probably the pellets by this guy, Poulter, and Reinhardt’s experiment probably didn’t work.”

According to McDowell, a scientist from the Smithsonian Astrophysical Observatory, Richard E. McCrosky, wrote about the artificial meteor test and attributed meteor tails to the payloads of each scientist involved except Zwicky. Also, McDowell pointed out, that if a small object speeds up past escape velocity, it is likely to just burn up, as atmospheric drag could have destroyed the pellets.

Ultimately, the first actual object to go into orbit around the Sun and stay in solar orbit was a satellite intended for the moon, Luna 1, that was launched by the USSR in January 1959. Instead, it missed lunar orbit and continued into solar orbit. It now maintains an orbit somewhere between the orbits of Earth and Mars.

Then in 1964, the Mariner 4 probe orbited the Sun to help make it’s eventual way into Martian orbit.