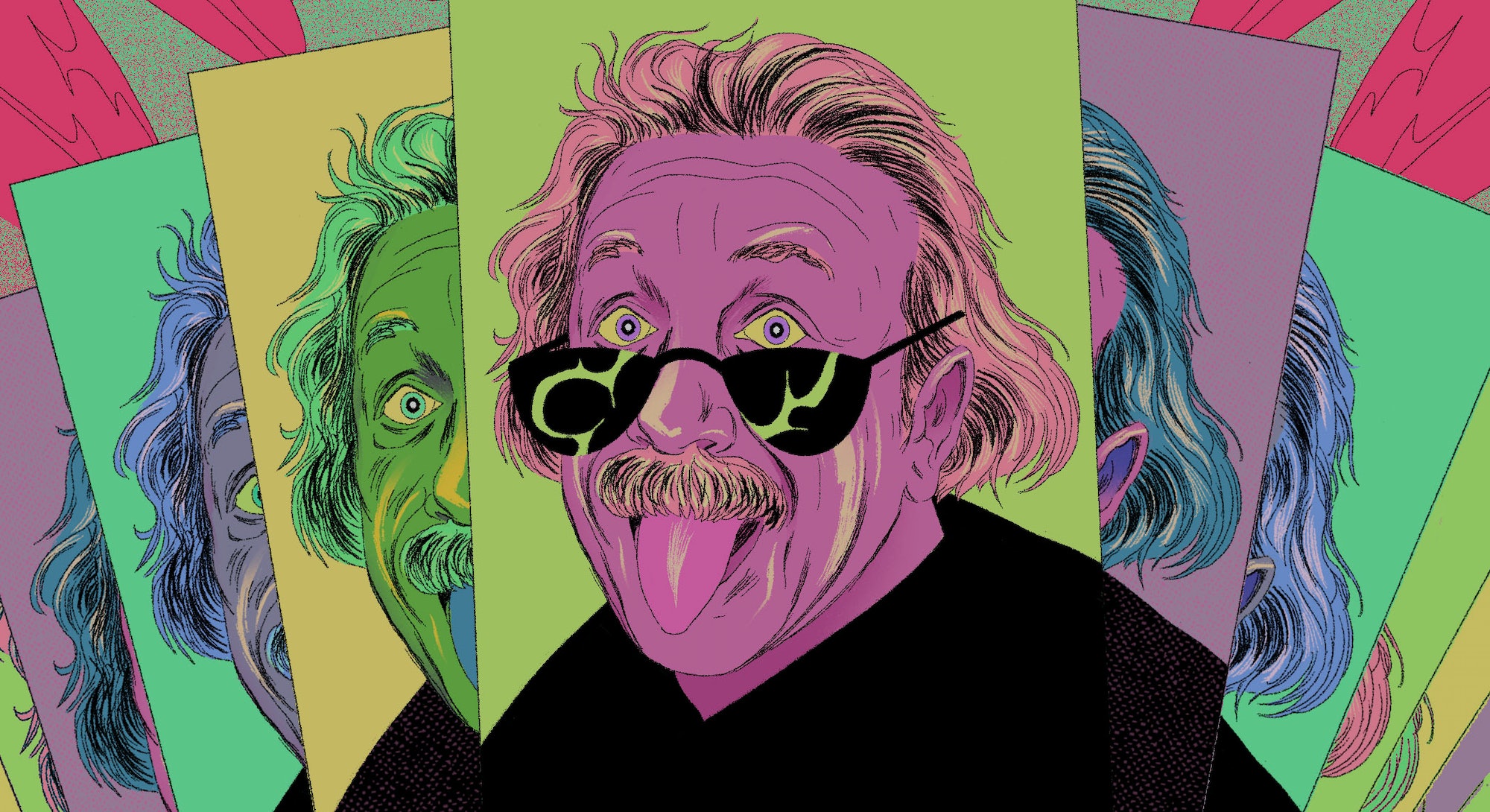 November 1919: Members of the Royal Society and the Royal Astronomical Society convened in London to discuss the results of observations of a recent solar eclipse.

They were searching for something very specific — and they believed they had finally found it: Evidence for one of the most radical physics theories ever conceived.

A few years before the world’s most preeminent scientists met, a relatively unknown physicist called Albert Einstein came up with a radical theory: General relativity. The theory goes that gravity isn’t just a force attracting two objects, but one that warps time. It could be proven, Einstein posed, by measuring the position of the stars surrounding the Sun both before and after a total solar eclipse. Even the slightest shift in the stars’ position would mean that light traveling near massive bodies, such as stars, bends as a result of gravity.

At the time, this theory was revolutionary. But today, it helps explain everything from black holes to gravitational waves. It did something else radical, too: It changed how we talk about physics.

General relativity’s fame catapulted Einstein into the public spotlight and helped make him into what he is today: America’s most celebrated scientist.

After the Royal Society’s announced they had evidence of general relativity, it went viral: Newspapers lauded the findings.

In a contemporary article, The Times of London deemed the work a “Revolution in Science. New theory of the universe.” The New York Times followed up with an article headlined: “HAILED AS EPOCHMAKING: British Scientist Calls the Discovery One of the Greatest of Human Achievements.” The Washington Post, for its part, concluded that “the theory, if true, is the most portentous scientific discovery in the history of the world.”

“It was generally accepted that the observations were decisive in verifying the prediction of Dr. Einstein, Professor of Physics in the University of Prague…”

The article concluded with Joseph Thomson (a British physicist and Nobel Laureate who discovered the electron) saying:

“These are not isolated results that have been obtained. It is not the discovery of an outlying island, but of a whole continent of new scientific ideas of the greatest importance to some of the most fundamental questions connected with physics. It is the greatest discovery in connection with gravitation since Newton enunciated that principle.”

Seemingly overnight, Einstein, a physics professor in Prague, became a worldwide celebrity. His stardom has endured.

“His name is synonymous with science,” Brian Schwartz, a physicist at the City University of New York Graduate Center, says in an interview with Smithsonian Magazine in 2005. “If you ask kids to show you what a scientist looks like, the first thing they’ll draw is wild white hair.”

It wasn’t the unruly locks alone, though. Einstein rose to his rapid and sustained fame on the coattails of his theory. In fact, the physicist’s rise to popularity is somewhat difficult to comprehend: How did an unkempt scientist join the A-List of the Roaring ‘20s? Why was he up there with beloved baseball hero Babe Ruth, comic legend Charlie Chaplin, and America’s gangster Al Capone?

The answer may lie in a chemical synergy of the physicist’s quirky persona, the gravity (if you will) of the science itself, and the public at the time’s surprising appetite for discovery. How Einstein rose to fame tells us about how science unfolds in the public eye even today.

According to a 1985 article, “Why Einstein Became Famous in America,” published in the journal Social Studies of Science by Marshall Missner, Einstein’s fame came because his theory was so novel, so profound, and went so viral. This runs counter to the idea that Einstein was a known entity with a platform long before his theories went to press.

“Both of them became famous, but their fame did not occur concurrently in the United States,” Missner writers.

“The most common literary reference that was used in relation to the theory was Alice in Wonderland.”

The theory of general relativity, for its part, did achieve instant fame. Hours after the Royal Society convened to discuss their potential verification, the theory went viral — at least for 1920s standards — with major newspapers across the U.S. and Europe covering the announcement with dramatic flare.

“Usually, scientific theories are established through the slow accumulation of data; however, the theory of relativity was dramatically confined by one event,” writes Missner.

The new theory shifted our view of the cosmos as a fixed entity to a time-twisting, mind-bending universe. In fact, as Missner notes, “the most common literary reference that was used in relation to the theory was Alice in Wonderland.”

A century later, many new physics theories bask in the same fame, too. As a 2019 article in Physics Today notes:

“Before Einstein, most coverage of science and technology in the mainstream press was limited to the inventions of figures like Michael Faraday, Nikola Tesla, and Thomas Edison, and, starting in the early 20th century, Nobel Prize recipients. Einstein’s fame has led to more coverage in general of theoretical physics, albeit with a slant toward fields such as particle physics and cosmology.”

Take the discovery of gravitational waves. In 2016, when the Laser Interferometer Gravitational-Wave Observatory (LIGO) announced the finding, it was dramatic.

“Ladies and gentlemen, we have detected gravitational waves,” LIGO director David Reitze states. “We did it.”

After the announcement, LIGO’s website had so many viewers in such a short period of time that the site literally crashed, as did Physical Review Letter’s site, the prominent yet very niche physics journal where the study was published, which at one point that day was getting upwards of 10,000 page views per minute by some accounts.

As the world became curious about who was behind the novel time-bending theory, they did not get what they expected. Einstein was quiet, gentle, and charmingly awkward: He never wore socks, he made jokes, and “he gave quotable quotes.” He was not dull, unapproachable, or stolid.

As Smithsonian notes in a 2019 story, in Walter Isaacson’s 2007 biography of Einstein, journalists were “thrilled that the newly discovered genius was not a drab or reserved academic…[but] a charming 40-year-old, just passing from handsome to distinctive, with a wild burst of hair, rumpled informality, twinkling eyes, and a willingness to dispense wisdom in bite-sized quips and quotes.”

Photographs of him when he arrived in New York for the first time in April of 1921, as Missner notes, “showed him standing in an ill-fitting coat, holding a violin, and smiling in a bemused way. It was not at all a frightening picture.”

It was the ideal combination of eccentric discovery paired with an eccentric human behind it.

As the theory of general relativity has aged like a fine wine, so has Einstein’s celebrity — despite his later attempts to find theories of the universe that never bore the same fruit.

Einstein spent years after proving general relativity seeking a unified field theory — a way to chart all forces into one theoretical equation — a concept that many other prominent physicists at the time criticized as lacking in evidence and less worthly of science’s time.

Yet his persistent attempts to come up with this unified field theory received continued attention from the news media at the time regardless — a sign of the bias that still persists in how we talk about science.

As Physics Today notes, “Einstein’s unified field theory attempts were discredited repeatedly because of the lack of viable solutions, let alone experimental evidence. But they received far more coverage than many of the important experimental and theoretical results by other physicists during the same period, such as advances in nuclear and particle physics.”

Einstein’s rise to fame may indeed be an outlier. The progress of science is more or less a slog. It’s quite rare for one observation or experiment to shift or confirm so dramatically a novel, and revolutionary, theory. What’s clear though is that America’s appetite for physics remains as does its desire for a captivating, eccentric mind behind it.

On his 143rd birthday, Inverse celebrates the world’s most iconic physicist — and interrogates the myth of his genius. Welcome to Einstein Week.