Are hot dogs bad for you? The truth behind the controversial report

“I have substantially decreased my consumption of red meat.” 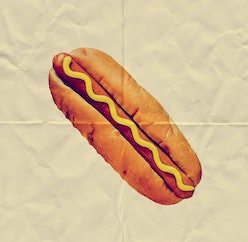 Whether they’re being hawked at a baseball stadium or heated over an open campfire, hot dogs are an often irresistible summertime delicacy.

Floating on a soft bun and loaded to the brim with tangy toppings, these one-handed sandwiches are a satisfying flavor (and often, sodium) bomb.

But hot dogs can pack a punch beyond flavor: a single dog could chop 36 minutes off your life.

Hot dog critics will commonly turn up their noses at the supposed mystery meat inside these wieners, but a study published this summer in the journal Nature Food says this may only be a small part of the supposed danger associated with hot dogs.

Olivier Jolliet, a professor of environmental health sciences at the University of Michigan, is a co-author of the new study. He tells Inverse the average hot dog has 61 grams of processed meat, which results in “27 minutes of healthy life lost due to this amount of processed meat alone.”

“When considering the other risk factors, like the sodium and trans fatty acids inside the hot dog – counterbalanced by the benefit of its polyunsaturated fat and fibers — we arrived at the final value of 36 minutes of healthy life lost per hot dog,” Jolliet says.

But these findings also necessitate nuance and context. The risk, Jolliet explains, isn’t equally experienced by every person. The situation is less hot dogs will harm you and more they can cause harm. Furthermore, the study spotlights a more immediate risk to both hot dog lovers and the planet: the negative impact hot dog manufacturing and consumption have on the environment.

What’s in a hot dog?

This alarming finding was one part of a larger study that looked at several thousand foods. The aim was to develop a “Health Nutritional Index” (HENI). Essentially, Jolliet and colleagues evaluated different types of food — from apples and fish to soda and hot dogs — to determine their overall “health” level.

Hot dogs have never been great for you, but does this new data change how you look at them?

Katerina Stylianou is the first author of the study and Detroit's Director of Public Health Information and Data Strategy. She tells Inverse these risk factors were determined using the Global Burden of Disease standard.

“The Global Burden of Disease is an international effort for about 40 years now with hundreds of studies being considered to establish robust risk-health outcomes,” Stylianou explains.

Her team considered around 6,000 age-gender-risk-health outcome associations, which were then aggregated to a weighted average estimated or each of the dietary risk factors.

They discovered that foods with “better” HENI scores contribute to disease-free minutes lived.

Meanwhile, foods with lower scores — like hot dogs — subtract overall “healthy” minutes lived by increasing the risk of disease. In the case of hot dogs, this disease risk might be “diabetes, ischemic heart disease, and colon cancer,” Jolliet says.

Do hot dogs shorten your life?

These results might sound scary — no matter how you look at it, it’s not glowing — but it also doesn’t necessarily mean that every single person who eats a hot dog will experience this 36-minute decline in life span, Jolliet explains.

This study involves “probability over a population, meaning it could be more for a single individual or no loss at all for others,” explains Jolliet.

Taking a closer look at the data, the potential health impact of the hot dog ranged between 1 minute and 49 minutes.

“Specific to hot dogs, our analysis considered 37 recipes with the average HENI scores for each food item ranging from 1 to 49 minutes lost per serving,” Stylianou explains. “The 95 percent confidence interval for the beef hot dog sandwich was 22 to 45 minutes of healthy life lost per serving.”

Even then, Stylianou says that these effects wouldn’t happen instantly the second you digest the dog. Instead, there’d be a lag time — if you ever felt the effects at all.

The real danger of hot dogs

But even if you manage to dodge the negative effects of hot dog consumption on your personal health, they might still come back to get you in the form of negative environmental effects, Jolliet, Stylianou, and colleagues warn in the study.

In addition to calculating the health benefits of food using the HENI, the researchers also looked at how large the carbon footprints of different foods were as well. The sustainability of food was considered against their health impact and given a traffic light labeling of green, orange, and red to indicate priority.

For example, while fish has health benefits across the board, salmon was given a red label compared to catfish’s green label based on the differences in sustainability between how each is fished.

Beef and processed meat — which hot dogs are the nexus of — were among some of the most environmentally detrimental foods evaluated based on their contribution to greenhouse gases during production.

Hot dogs aren’t the only offender. Beef stew, for example, can have a carbon impact equivalent of about 14 miles driven by an average passenger vehicle, the researchers report.

Can you still eat hot dogs?

Carrying the weight of climate change on your shoulders every time you decide what to make for lunch may seem daunting, but Stylianou says that this study actually highlights how a few dietary changes can really influence human health — and the health of the planet.

This doesn’t mean you need to only eat berries and seeds. Instead, it might look like swapping out a hot dog at the fair for fried catfish.

These are simple changes that both Jolliet and Stylianou say they’re already making in their personal lives after this work.

“I have substantially decreased my consumption of red meat and have selected to only consume it on special occasions,” Stylianou says. Instead, she’s taken to growing a meat substitute — mushrooms.

CHECK, PLEASE is an Inverse series that uses biology, chemistry, and physics to debunk the biggest food myths and assumptions.