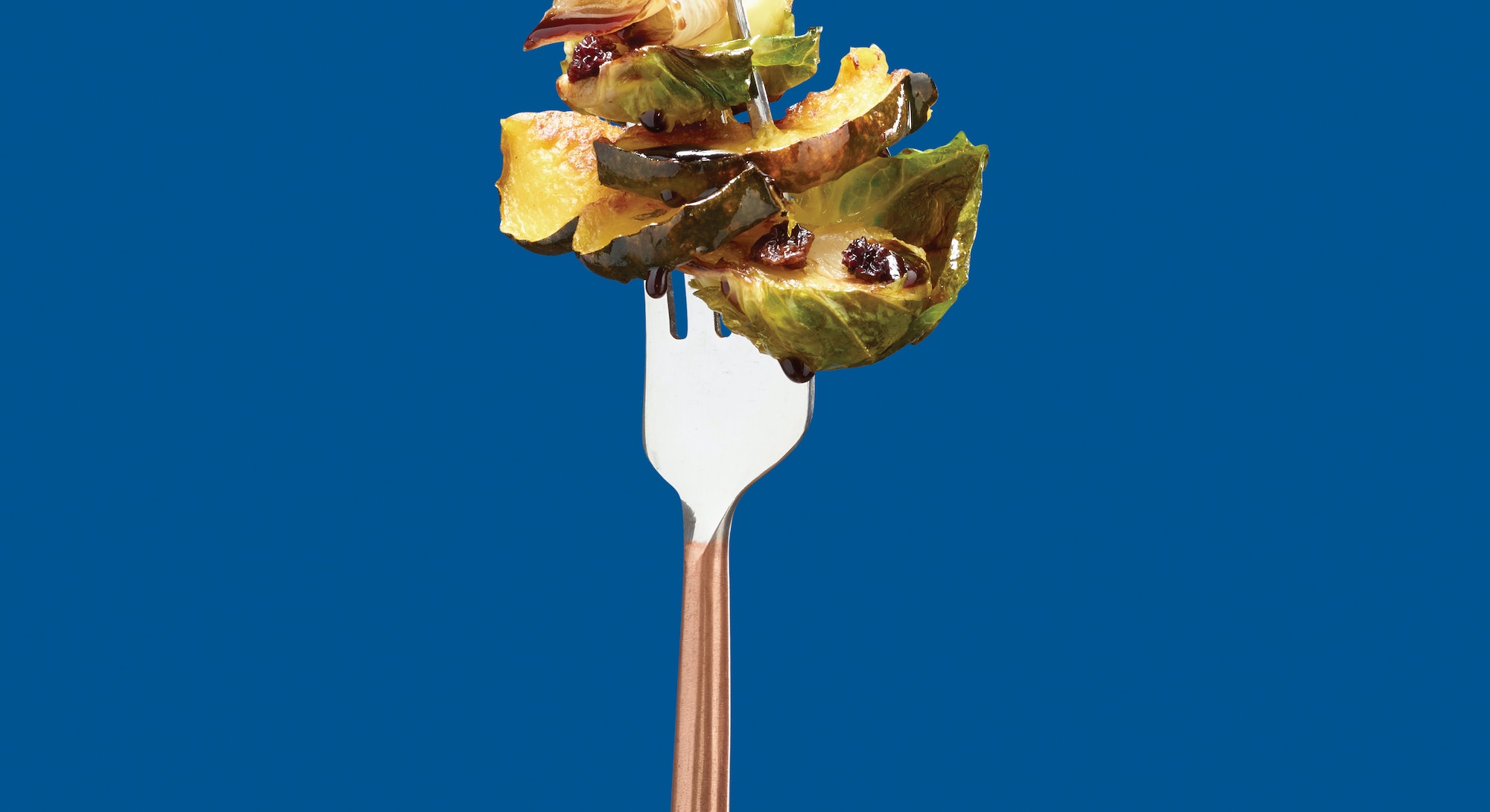 Eating is a multi-sensory experience. Before food gets near your mouth, you see it, smell it, and maybe even hear it as you move it around a plate or feel its texture between your fingertips. You taste it when it hits your tongue, listen to it as you chew, and feel it as you swallow.

This concert of the senses helps you decide whether you enjoy eating the food — and if you want to eat more. Non-sensory factors may play a role in your tastes, too, like the food your mother ate while pregnant with you, the meals you ate as a child, and the culinary culture you grow up with and live in, the abundance of certain foodstuffs compared to others. Maybe you’re allergic to certain foods, like peanuts or kiwis.

In short, why we like to eat one thing and not the other is complicated. And for some foods, the complexity gets amplified by cultural connotations. And when it comes to the holiday table, there is perhaps no food so divisive and thorny as the Brussels sprout.

“Humans have evolved to avoid bitterness.”

When I ask my friends about Brussels sprouts, some know why they dislike them: the pungent smell, the mushy texture, the bland taste, and even “bad vibes.” These miniature cabbages inspire joy and fear in equal measure. Some people love them, some loathe them, and some cook them every holiday season, regardless. But the real reason why these little vegetables are so divisive may be more to do with evolutionary biology than with your grandma’s cooking skills.

A question of taste

Generally, our ability to taste anything rests on the little bumps on our tongues. These are called papillae, and they contain taste buds. Taste buds send messages to our brains via nerve cells. The brain then interprets these signals to perceive how the food in our mouths tastes depending on its molecular makeup.

Scientists theorize that glucosinolates taste bitter because they’re part of a plant’s defense system, protecting it from disease and creatures that might feed on it. Although the bitter flavor isn’t enough to stop humans from eating sprouts, it could explain why many of us dislike them.

“Humans have evolved to avoid bitterness since many poisonous natural plants are bitter,” D’Angelo says. “So, in general, we don’t like bitter tastes.”

Taste is essential for survival because it lets us test food before we ingest it. A bitter flavor may indicate a poisonous substance, much in the same way sourness can reveal food that has gone bad. Sweet and salty tastes, by contrast, tend to signal food contains vital nutrients and proteins.

But in truth, the taste is more complex than a base survival skill. Charles Spence, a professor of Experimental Psychology at the University of Oxford specializing in designing multi-sensory foods, explains to Inverse that “the problem is that the word taste is used in different ways.”

“Sometimes it’s used when scientists talk about gustation, which is sweet, sour, bitter, salty or, umami picked up by the taste buds on the tongue,” he says, “but most people mean flavor of preference.”

The flavor is based on more than taste — it stems from the smell, too. Some claim that smell accounts for up to 70 percent of flavor. Recent reviews have since called that figure into question, but still, researchers agree that smell plays a significant role in how we perceive flavor.

Flavor — and not taste — could help reveal why people enjoy eating Brussels sprouts despite the bitterness. Some research suggests that dislike of bitter tastes isn’t universal to humans but may be influenced by our genes.

Studies pinpoint several genes that may affect how we perceive bitterness. For example, one 2013 study linked the perception of bitter tastes to a variant in the TAS2R38 taste receptor gene.

People with this variant can perceive the bitterness of a chemical called PTC. PTC is similar to the bitter chemicals found in broccoli and Brussels sprouts.

And according to commercial genetic testing company 23andMe, about a quarter of the population have more papillae on their tongue than average, and in turn, they have a heightened sense of taste.

“We call these ‘polarizing foods.’”

To learn more about Brussels sprouts specifically, I turn to Danielle Reed, Associate Director at the Monell Chemical Senses Center in Philadelphia, whose work focuses on why people perceive taste and smell differently. She recently dug into the evidence suggesting the dislike of Brussels sprouts may have a genetic component.

Her analysis used “liking” data from the U.K. Biobank, a large U.K. study of hundreds of thousands of people that combines data from electronic health records, biological samples, and surveys to help draw out relationships between lifestyle and personality traits, environmental factors, and health measures.

Reed and her team grouped people in the study based on their genotypes.

The team then checked to see if any specific genotype grouping differed from the others in terms of liking sprouts.

“We learned that two spots in the human genome vary in ways that predict loving versus hating sprouts,” Reed says. Although this is fascinating, she explains it’s difficult to draw firm conclusions based on these data.

“These two spots are not near known taste or smell genes,” Reed explains. In other words, disliking sprouts may be linked to distinct genetic features, but these do not appear to be to do with taste, smell, or flavor.

“Sprouts may be loved or hated for other reasons,” Reed suggests. The vegetable’s texture or digestibility could play a role, but more research is needed to test these theories.

Can you learn to love sprouts?

Brussels sprouts aren’t the only foods likely to divide people at the dinner table.

“There are other ‘love it or hate it’ types of food,” Reed says. “We call these ‘polarizing foods.’”

Other classic polarizing foods include cilantro, blue cheese, and olives. But there are others, she says.

“A recent analysis we carried out of Amazon Food Reviews also suggests that ghost peppers, alkaline water, and several other foods and drinks are also polarizing,” Reed says.

Cilantro is particularly polarizing because its flavor can dramatically differ from one person to the next — in the case of this herb, however, the link to our genetics is clearer than that of sprouts.

23andMe researchers have found two genetic markers associated with cilantro aversion, which are near genes that play a role in the sense of smell. The genes are involved in olfactory receptors that detect aldehydes, the chemicals in soap. Scientists believe this could be why some people describe cilantro as tasting “soapy.”

In turn, food scientists in the Netherlands have used genetics to make sprouts more palatable to more people — as NPR reported in a 2019 story, in the 1990s, a Dutch scientist called Hans van Doon who worked for Novartis figured out the chemical responsible for sprouts’ bitter taste. Sprout seed companies started growing seeds from the archives, looking for plants that contained lower levels of these chemicals. Once they hit on the right varieties, they created hybrid plants using modern, high-yield sprout seeds, and voila! A sweeter, less divisive Brussels sprout was born.

Taken together, genetics and evolutionary biology suggest there may be a biological reason why you are predisposed to like or loathe bitter Brussels sprouts. But in a win for nurture over nature, it may also be possible to learn to love the flavor of sprouts.

“We know that exposure can, generally, increase the liking of certain foods,” Reed tells Inverse. “If you eat something often, you do learn to like it.”

In one 2022 study, researchers observed that unborn babies reacted to the flavor of carrots compared to kale in the womb. The researchers theorized that what mothers eat can influence what a baby enjoys eating after birth because the amniotic fluid surrounding the baby changes depending on what the mother eats and drinks.

It sounds logical: If your parents eat a certain food, including through pregnancy, and you eat that same type of food often as you develop, then you are likely to keep eating it throughout life. By the same token: Can eating food often affect your preferences for that food?

Psychology professor Charles Spence says this could apply to certain foods, and our tastes can also change with age. He likens it to how some people put sugar in their coffee when they first start drinking it, then over the years, their preferences shift, and they enjoy the bitterness. But this may not always be the case. Spence points out that those who experience the extreme “soapy” coriander taste may never enjoy it — no matter how much they eat. Whether that is true of sprouts is still a matter for future investigation, Reed says.

There’s more than one way to cook a sprout

Maybe you dislike them because they’re bitter, and humans are not built to enjoy bitter things — our taste buds are our poison alert systems.

You may have a variant gene that makes you predisposed to taste more bitterness than others. Or you could have supertasting superpowers and more taste buds, making you more attuned to bitter flavors.

There might be something up with the texture you find icky, or you don’t digest them all that well. Perhaps you didn’t have veggies much as a kid, so you don’t like them now. It’s also worth considering how aversions to certain foods might influence your enjoyment of them later. Maybe you had a bad case of food poisoning and now associate the food you ate before you got sick with that experience — one of the many reasons I no longer eat lobster.

Or there could be a more straightforward reason: You’ve been cooking sprouts the wrong way.

“I like Brussels sprouts, but I don’t like them whole-boiled,” Annie Gray, food historian and author of At Christmas We Feast, tells Inverse. “The outside is mushy, and the inside is raw.”

Undercooked sprouts can taste even more bitter than the cooked variety. Overcook them, and they release more sulfur — which amplifies the cabbage smell. Gray suggests frying sprouts and throwing in some bacon and chestnuts for good measure. For her part, food consultant and scientist D’Angelo recommends grilling sprouts.

Gray points out that sprouts don’t have to be a holiday side, either. So if you love them, go wild. If you don’t like them, ditch them. Whether you have a child-like disdain for anything green or because it’s written in your DNA, there’s no need to force it.

“They’re just vegetables,” Gray says. “Eat what you want, when you want. Even at Christmas. Especially at Christmas.”

TASTE OF THE HOLIDAYS is an INVERSE series about the science of food. Get the inside scoop on your favorite (or hated) nostalgic holiday dishes via our hub, which will update with new stories through December 2022.