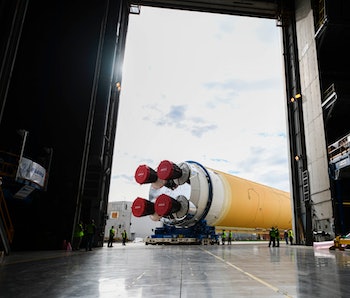 Artemis I may be off to the Moon, but it didn’t come without its share of stumbles. NASA needs to iron-out some critical elements to its Artemis Program for it to succeed from here out, says a report from a major oversight agency.

Some wonder if Artemis will pick up the Apollo baton, or fall short of its lofty goals. If Artemis I achieves its goals from now until the end of its mission, it will springboard the rest of the Artemis Program, which seeks to return humans to the Moon, with crewed lunar voyages that would last weeks or months. It also wants to place humans on Mars.

This expensive undertaking ($50 billion so far) easily meets the fiscal threshold to warrant analysis from the U.S. Government Accountability Office (GAO). The report, published in September, provides a glimpse into the stumbles up to that date — and what the program needs to see human boots put on the Moon for the Artemis III mission, tentatively slated for 2025.

Otherwise, “NASA’s people and resources will continue to be strained as it works towards an aggressive goal of returning astronauts to the lunar surface... while also supporting its increasing portfolio of other non-lunar major projects,” say GAO officials.

GAO has commended the space agency for making certain changes, like creating new oversight steps that help align the many projects that collectively comprise Artemis with each other. But NASA also retains old procedures and moderate short-sightedness that might delay or hinder future missions.

It’s like a colossal, critical jigsaw puzzle, where NASA needs to anticipate how the 999th piece will get connected to the rest of the space program.

AI might become a critical feature in some Artemis systems. The GAO recommends that NASA determine soon if getting people farther off Earth for longer periods of time will make AI a necessity.

During Apollo, NASA personnel at Mission Control Center on Earth could easily and quickly communicate with astronauts. But that was a ground-centered mode of operations, and it will need to evolve into automated components for future Artemis missions far away. Artemis II could last as short as eight days, and will bring the first humans to the Moon in more than half a century. But, this is not the endgame; Artemis has loftier goals. NASA wants to build a sustainable lunar presence, and that requires a station not unlike the International Space Station, currently known as Gateway. NASA will face challenges to maintain this lunar outpost with only four astronauts and periods of vacancy.

Three years ago, Jeremy Frank, Group Lead of Planning and Scheduling Group in the Intelligent Systems Division at NASA’s Ames Research Center, outlined how AI could power human exploration of the Moon and Mars. “Small crews cannot take on all Gateway functions performed by ground today, and so vehicles must be more automated to reduce the crew workload for such missions,” Frank wrote in a 2019 report. “In addition, both near-term and future missions will feature significant periods when crew is not present; Gateway shall provide for autonomous operations for up to 21 days, independent of ground communications, when crew are not present.”

Frank thinks automation will be the solution. “Gateway may benefit from robotic assistants inside the spacecraft, and robots may perform some functions while astronauts are not present,” he says. AI applications on Gateway could also prove how a mission might operate independently from Earth-based Mission Control for missions to Mars in the far-future.

Apollo and Artemis are space programs of different eras. In the more than half century between them, the space sector has broadened.

“It’s not surprising that NASA has to compete for talent with other centers of space activity,” John Logsdon, aerospace historian and Professor Emeritus of Political Science and International Affairs at George Washington University, tells Inverse.

“The way that NASA competes is by having a good and successful program. They probably can’t compete on salary because of civil service rules. It’s not like Apollo, where all the action was at NASA and its major contractors. Now, there’s lots of alternatives. So it’s a very different environment.”

GAO suggests NASA consider future Artemis engineering needs right now, so it can determine the sorts of roles it will need to fill. But it hasn’t done so, citing uncertainties about the future.

The recommendation is that NASA needs to hustle. Russell says NASA will have to attract and retain a workforce with “sufficient skill sets” to build out Artemis systems, like automation, if AI and other innovations become more involved.

And these skills are in high demand elsewhere, like the private sector. “So what’s the plan to be able to retain those types of employees?” Russell says.

“You don’t have to come up with specific equivalent staff… but to start to think about the kind of workforce skills that you’re going to need to sustain this program, and to a much longer time horizon than the five years.” The half-decade is what’s typically covered in NASA budget planning.

By forecasting the “unique” talents they’ll need after five years, NASA could begin planning for future stages right now. The GAO thinks that’s important, despite what might happen with “changes in administration priorities or Congressional direction,” Russell says.

The Artemis workforce is split into different sections, and GAO’s biggest concern was that NASA still needs to integrate management if future missions to the Moon and Mars are going to succeed.

“Because, you know, the level of complexity really goes up as you’re getting to Artemis III in particular. You need the Exploration Grounds System, the crawler, the Vehicle Assembly Building, that has to be working as intended. You're [also] going to be trying to reuse parts of the Orion crew capsule,” Russell says.

“We found that each of the individual projects has their own schedules and milestones that they’re following, but there was no agency-wide guidance for how to put those individual schedules together in a coherent way,” and adds, “NASA management did concur with that recommendation.”

The big reason this matters is, if an individual program has a delay, other teams would benefit from getting better communication about its hiccups. That might give another project more time, for instance, or trigger a change of plans. But regardless of the outcome, narrowing down an Artemis II or Artemis III mission target date will be hard to do without.

The goal is, as Russell says, “a good synergy” across the individual projects, “and a good realism” about the schedule. “They have to work seamlessly together to accomplish the Artemis I mission or beyond.”