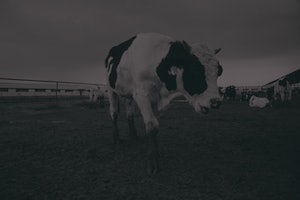 A controversial diet change could reduce air pollution and save lives

Somewhere in a crowded cattle feedlot in America’s Corn Belt, a cow will poop. The cow’s manure carries a quietly devastating ingredient, one that contributes to agricultural emissions and ultimately air pollution: ammonia.

New research implicates air pollution caused by agriculture production in the premature deaths of 17,900 Americans. This air pollution is linked to both ammonia and fine particulate matter (PM2.5). These findings were published Monday in the journal Proceedings of the National Academy of Science.

There are solutions that could curb air pollution deaths significantly, the study team says. These include eating a more plant-based diet. President Joe Biden might not be limiting access to red meat (despite false claims) but this study suggests it could be wise for individuals to make that choice themselves.

“Dietary shifts toward more plant-based foods that maintain protein intake and other nutritional needs could reduce agricultural air quality-related mortality by 68 to 83 percent,” the team reports.

“We hope food producers, consumers, and policymakers can use this information to inform their food-related decisions,” co-authors Nina Domingo and Jason Hill tell Inverse. Both are researchers at the University of Minnesota.

How they did it — The researchers estimated air quality deaths related to 95 different agricultural commodities in the United States, using data from the U.S. Department of Agriculture. Subsequently, they estimated the per-unit annual impact of 67 products from 11 food groups. Products ranged from beef to beans.

The researchers also estimated how many deaths could be reduced if consumers switched their dietary palates from animal-based proteins to other meat or plant options, using the planetary health diet of the EAT-Lancet Commission as a guideline.

Roughly 12,400 deaths, or 69 percent of deaths related to air quality and agriculture, were associated with ammonia-related (NH3) emissions in livestock waste and fertilizer use.

A further 4,800 deaths, or 27 percent of deaths related to air quality and agriculture, were associated with fine particulate matter (PM2.5) particles, also known as black carbon or “soot.” You can find these particles in agricultural dust and fuel combustion from field equipment.

PM2.5 consists of microscopic air particles 2.5 microns or less in size. Some scientists argue that they are the greatest environmental risk factor for human mortality.

A significant proportion, or 47 percent of deaths, are located in only a small number of U.S. counties, researchers say. These counties are in regions and states with heavy agricultural industries, including:

What’s new — The study’s results suggest U.S. agricultural operations are associated with the premature deaths of 17,900 Americans. To put that into perspective: fewer than 4,000 Americans died from fires in 2019.

Eighty percent of this air pollution comes from the production of animal-based proteins.

Bad air quality stemming from beef production results in significantly more health issues than any other agricultural industry. The issue is:

Why is red meat bad for health?

Despite the popularity of the Atkins or keto diets, which are high in proteins, not all animal-based proteins are good for your health.

In fact, scientists have long known that red meat is bad for your health and the environment. Red meat has been associated with increased risk for and mortality associated with chronic diseases, including:

The World Health Organization even considers red meat to be a “carcinogen” for its effects on health. Finally, research suggests that there is no “safe” amount of unprocessed red meat that you can consume.

Switching from red meat to plant-based options has a variety of health benefits. According to studies presented by the American Heart Association, switching some of your calories from meat to plants can reduce your chance of getting heart disease.

And according to this new study, we have another reason to be wary of beef: it’s polluting the air we breathe and indirectly contributing to deaths.

What foods contribute to air pollution?

While some studies have been published on the links between agriculture and climate change, few have examined the effect of specific diets on air pollution.

Domino and Hill say they focused on identifying “individual foods and dietary choices” that contribute to air pollution as well as “actions that food producers and consumers can adopt to improve air quality-related health outcomes.”

The study points out that while agricultural emissions contribute to air pollution-related health issues, it faces fewer regulations compared to other polluters, such as the automobile industry.

The study team hopes their research inspires policymakers, regulators, and farmers to take action to curb air pollution — and save lives.

What’s next — We can take away several solutions from these findings, according to the researchers.

Researchers also suggest that reducing the overall number of calories we consume can save a smaller number of lives.

Abstract: Agriculture is a major contributor to air pollution, the largest environmental risk factor for mortality in theUnited States and worldwide. It is largely unknown, however, how individual foods or entire diets affect human health via poor air quality. We show how food production negatively impacts human health by increasing atmospheric fine particulate matter (PM2.5), and we identify ways to reduce these negative impacts of agriculture. We quantify the air quality–related health damages attributable to 95 agricultural commodities and 67 final food products, which encompass>99% of agricultural production in the United States. Agricultural production in the United States results in 17,900 annual air quality–related deaths, 15,900 of which are from food production. Of those, 80% are attributable to animal-based foods, both directly from animal production and indirectly from growing animal feed. On-farm interventions can reduce PM2.5-related mortality by 50%, including improved livestock waste management and fertilizer application practices that reduce emissions of ammonia, a secondary PM2.5precursor, and improved crop and animal production practices that reduce primary PM2.5 emissions from tillage, field burning, livestock dust, and machinery. Dietary shifts toward more plant-based foods that maintain protein intake and other nutritional needs could reduce agricultural air quality–related mortality by 68 to 83%. In sum, improved livestock and fertilization practices, and dietary shifts could greatly decrease the health impacts of agriculture caused by its contribution to reduced air quality.